Is raw cookie dough safe? A food scientist reveals the best way to eat it 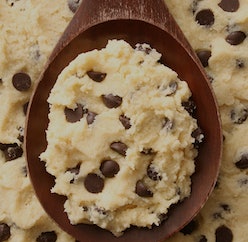 Studded with chocolate chips and soft to the touch from whipped butter and sugar, fresh cookie dough is a beautiful sight. Clinging to the tip of a spoon or to the edge of an electric beater, there’s no stronger temptation in the home kitchen than to sneak a taste of the leftover dough as a reward for a job well done.

But competing against this desire to enjoy cooking dough is a nagging caution: Isn’t raw cooking dough bad for you? After all, the CDC has a whole “Say No To Raw Dough!” campaign.

It’s a confusing situation alongside cookie dough confectionaries and a special line of cookie dough made by Toll House you’re encouraged to eat.

Ultimately, it comes down to exactly what you’re eating — a recipe whipped up in the kitchen or specially made edible dough.

Kelly Reynolds, a professor of environmental science and public health at the University of Arizona who specializes in food safety, says people often forget there are two ingredients in a homemade dough that put you at risk. When it comes to eating cookie dough before it’s baked, she tells Inverse “it’s not a risk I would take.”

There are some mixed messages on the web, and probably in your own kitchen, about whether or not it’s really unsafe to eat raw cookie dough. Some will suggest that eating raw cookie dough is okay in moderation or if its ingredients are fresh and haven't been recalled. Other authorities, like the CDC, will say it’s never okay to eat.

“When you prepare homemade dough for cookies, cakes, and bread, you may be tempted to taste a bite before it is fully baked,” says a CDC website on the topic. “But steer clear of this temptation.”

While the decision is up to your own risk assessment, it is important to know that eating cookie dough isn’t risk-free, Reynolds says. And even if you think you’ve never gotten sick from indulging in the dough, there’s still a chance you did and simply didn’t associate the two events.

“You can eat cookie dough on Saturday and not come down with the stomach bug until two days, three or four days later,” Reynolds says. “So you may not link it back to that cookie dough exposure.”

You’ve probably heard eating raw dough is dangerous because it means eating raw eggs — which can give you salmonella. However, raw eggs are not the only dangerous part of raw cookie dough, Reynolds says.

“The other part that people aren't as familiar with is the flour itself,” Reynolds says.

Fecal transmission from animals in wheat fields can lead to Escherichia coli (E. coli) bacteria taking up residence of stalks of wheat — or other flour crops, like oat or rice. It’s not standard to remove or otherwise treat this crop for E. coli before its ground into flour, Reynolds explains, which means that one contaminated yield could get ground into an otherwise safe crop.

As a result, E. coli can become dispersed through the entire batch of flour.

Not every bag of flour or every cracked egg will carry bacteria, but if you happen to snack on a batch of cookie dough that is contaminated, you are in for a pretty bad time.

For both illnesses, symptoms can include:

In extreme cases, Reynolds says that E. coli can result in kidney or liver failure and even death. In recent years, flour companies like King Arthur have recalled their product due to E. coli contamination.

“It’s not something I ever do,” Reynolds says. “It’s not a risk I would take.”

Before you despair and vow to never taste the forbidden goodness of raw dough again, Reynolds says there are some easy at-home steps you can take to make your dough safe to eat.

Pasteurized eggs are heat-treated in their shells to eliminate the risk of salmonella. Pasteurized eggs should be easy to find in your local grocery store, but you can always rely on vegan alternatives (like a chia seed “egg” or applesauce) in a pinch as well.

Making your flour safe is a little trickier as grocery stores don’t readily sell heat-treated flour, but Reynolds says this is something you may be able to do in an oven *(Editor’s note: Please see below for an update to this story).

Putting your flour in the freezer can help stave off some bacterial growth, Reynolds says, but is not as effective as heat treating.

This is “edible” cooking dough.

But if you don’t want to go to all the extra effort to bacteria-proof your cookie dough, edible dough sold in shops and groceries has got you covered. Pillsbury recently released a ready-to-eat (and bake) refrigerated cookie dough and shops like DŌ will sell you scoops of safe cookie dough like ice cream.

There’s nothing wrong with these alternatives, Reynolds says — except the potential to cause confused consumers to accidentally snack on the unsafe dough instead.

“Not all cookie dough is the same,” Reynolds says. “So make sure that you're reading the labels and really understanding what you're purchasing and what you're eating.”

Now read this: Why is pumpkin spice so popular? Scent scientists explain the hype

*Editor’s note: The Food and Drug Administration specifically warns against heat-treating flour in your home. We have updated this story to reflect the change in guidance.