After an unwitting human kissed Sonic the Hedgehog in 2006, you would’ve thought we’d learned our lesson. But 13 years later, humans are as foolish as ever, and now the United States’ major public health agency has to step in to stop the interspecies romance.

On Friday, the US Centers for Disease Control and Prevention announced an ongoing investigation into a multistate Salmonella outbreak linked to pet hedgehogs. According to the CDC announcement, 11 people in eight US states have been infected with the bacterial strain Salmonella Typhimurium, and investigators have traced the infections back to the spiky pets. So far, one of the infected individuals has been hospitalized, and there have been no deaths.

Based on lab tests and interviews with infected individuals, CDC investigators concluded that 10 out of the 11 sick people had come into contact with hedgehogs before getting sick. They haven’t identified whether all the hedgehogs came from the same place, though.

Here’s the CDC’s map of the outbreak: 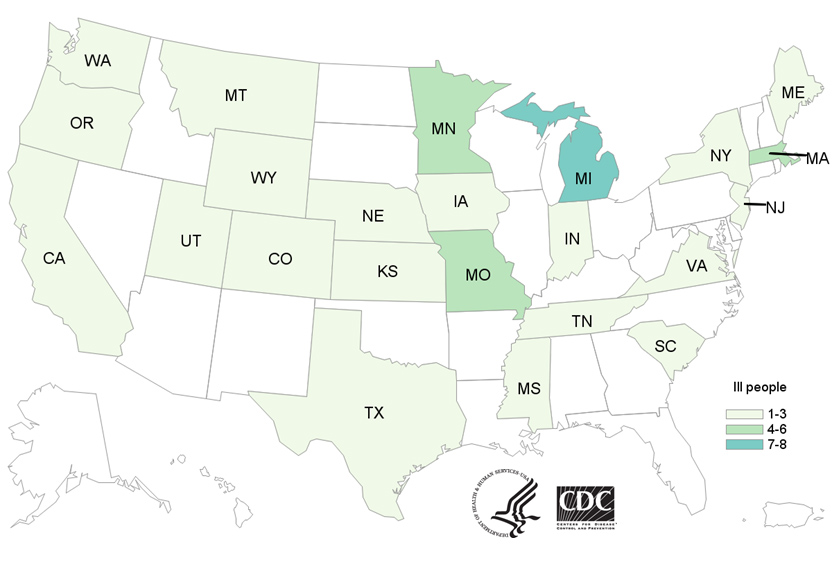 As you can see, the cases are spread out geographically, which suggests that the hedgehogs probably didn’t all get sick from having a playdate together.

The main symptoms of Salmonella Typhimurium are diarrhea, fever, and abdominal cramps. Most people show symptoms anywhere from 12 to 72 hours after exposure, and the infection usually lasts between four and seven days. Patients typically recover without treatment. In rare cases, the severity of diarrhea can require a patient to be hospitalized to prevent excessive dehydration, but for most patients, the illness runs its course without treatment.

The people at highest risk of complications from Salmonella infections are the very young, the very old, and those with compromised immune systems.

The CDC reports that 1.2 million people get sick from Salmonella each year, resulting in 23,000 hospitalizations and 450 deaths annually. So all in all, these 11 individuals sickened by hedgehogs are a drop in the Salmonella bucket. Nonetheless, getting sick from snuggling your animal companion is no fun. So how does it happen?

“Hedgehogs can carry Salmonella germs in their droppings while appearing healthy and clean,” reports the CDC. “These germs can easily spread to their bodies, habitats, toys, bedding, and anything in the area where they live. People become sick after they touch hedgehogs or anything in their habitats.”

So even if your little spiky pal seems happy and healthy, running around collecting gold rings and Chaos Emeralds, he could be carrying Salmonella. That doesn’t mean you need to give him antibiotics or anything, just don’t kiss him on the mouth.

More like this
Science
7.2.2022 12:00 PM
Why is my cat scratching furniture? The answer might surprise you
By Tara Yarlagadda
Science
6.19.2022 1:00 PM
What is my dog thinking? Science may finally have an answer
By Tara Yarlagadda
Mind and Body
2 hours ago
This everyday behavior is essential to preventing heart disease
By Elana Spivack
Share: