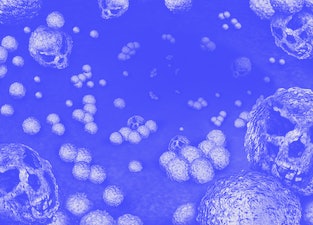 Scientists are fighting superbugs with economics

Across the world, doctors are waging an invisible war against a monster of our own creation: antimicrobial-resistant bacteria.

These so-called "superbugs" have mutated to resist antimicrobial treatment, including antibiotics like penicillin. They are a growing threat to not only individuals' health, but to global healthcare infrastructures as well. Much like the current Covid-19 pandemic, the terrible havoc such a superbug outbreak could wreak is likely to be far worse in low-income countries, where the tools for surveillance and treatment of these infections is limited.

But some researchers are betting on a new way to combat the next global pandemic: Using economic data to predict the prevalence of antimicrobial resistance in regions such as the Middle East, Sub-Saharan Africa, and the Pacific Islands could help avoid catastrophe.

Why it matters — A team of researchers has designed a new model to close this knowledge gap. They report this solution could affect over 2 billion people, and may help scientists better target these areas for increased antimicrobial resistance surveillance and solutions.

The model was published Monday in the journal Proceedings of the National Academy of Sciences.

"Our results support concerns raised on the alarming potential for [antimicrobial resistance] to develop into a 'perfect storm' in parts of the Middle East."

If microbes get the upper hand, then the cost to humans may be catastrophic. Globally, these types of infections are expected to kill more people than cancer every year by 2050.

In many parts of the world, this push-and-pull is kept at bay by strategic surveillance systems on the global and local scale — the World Health Organization, say, as well as individual hospitals. These systems keep track of microbial changes as they happen, tracing outbreaks as they occur and nixing them before they get out of hand.

But this kind of tracking comes at a cost — and it's one that lower and middle-income countries can't always pay. As a result, less is known about the development and spread of antimicrobial resistance in countries like Cameroon or Iran than in Canada or Ireland, for example.

"This lack of information limits the support for empirical and targeted treatment guidelines, risking further exacerbation of [antimicrobial resistance] levels due to inappropriate antibiotic usage," write the authors.

What's new — A team of Dutch researchers decided to use existing economic data from low-income countries to develop a prediction model of their expected antimicrobial resistance levels.

"While many countries lack structural data on clinical [antimicrobial resistance,] their socioeconomic status is more extensively characterized. [P]revious works showed significant correlations between AMR prevalence and socioeconomic factors for a large number of countries, including [low- and middle-income countries.]"

Some of these determining factors include:

What they discovered — While their model wasn't perfect at estimating all antimicrobial resistance levels, the authors report it showed high accuracy, between 78 and 86 percent, for six out of the nine pathogens. Overall, these estimates now cover 99 percent of the global population.

These data may also help researchers zero-in on countries which could soon be facing a surge of such microbes in coming years.

"Our results support concerns raised on the alarming potential for [antimicrobial resistance] to develop into a 'perfect storm' in parts of the Middle East that are burdened by conflict, such as Syria, Yemen, and Iraq," write the authors.

Using these data, researchers can begin to better target the implementation of surveillance systems for these countries.

What's next — While this model has the potential to do a lot of good for the health infrastructure of these low- and middle-income countries, the authors acknowledge their model is far from perfect.

In the future, studies might look to solve existing limitations such as expanding their economic data sources beyond the World Bank. Additionally, future models might include other health indicators, such as metagenomic data from human sewage, or climate parameters like rising temperatures.

Together, these future improvements can help better capture the diverse environment and needs of global healthcare systems.

Abstract: Surveillance is critical in containing globally increasing antimicrobial resistance (AMR). Affordable methodologies to prioritize AMR surveillance efforts are urgently needed, especially in low- and middle-income countries (LMICs), where resources are limited. While socioeconomic characteristics correlate with clinical AMR prevalence, this correlation has not yet been used to estimate AMR prevalence in countries lacking surveillance. We captured the statistical relationship between AMR prevalence and socioeconomic characteristics in a suite of beta-binomial principal component regression models for nine pathogens resistant to 19 (classes of) antibiotics. Prevalence data from ResistanceMap were combined with socioeconomic profiles constructed from 5,595 World Bank indicators. Cross-validated models were used to estimate clinical AMR prevalence and temporal trends for countries lacking data. Our approach provides robust estimates of clinical AMR prevalence in LMICs for most priority pathogens (cross-validated q2 > 0.78 for six out of nine pathogens). By supplementing surveillance data, 87% of all countries worldwide, which represent 99% of the global population, are now informed. Depending on priority pathogen, our estimates benefit 2.1 to 4.9 billion people living in countries with currently insufficient diagnostic capacity. By estimating AMR prevalence worldwide, our approach allows for a data-driven prioritization of surveillance efforts. For carbapenem-resistant Acinetobacter baumannii and third-generation cephalosporin-resistant Escherichia coli, specific countries of interest are located in the Middle East, based on the magnitude of estimates; sub-Saharan Africa, based on the relative prevalence increase over 1998 to 2017; and the Pacific Islands, based on improving overall model coverage and performance.

More like this
Mind and Body
Sep. 25, 2022
Why just one case of polio is cause for alarm — a virologist explains the dreaded disease
By Rosemary Rochford and The Conversation
Science
Sep. 22, 2022
Can science prevent a pandemic?
By Tara Yarlagadda
Science
Oct. 1, 2022
Ancient humans forged hybrid species at critical periods in our evolution
By Penny Spikins and The Conversation
Related Tags
Share: