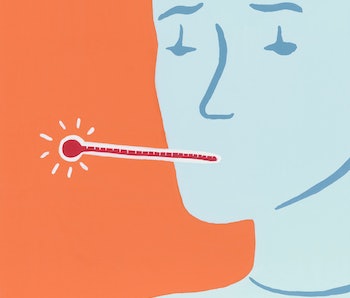 Strep throat is so common that pathologist Dr. James Musser calls it an "occupational hazard of attending elementary school." But while it's a familiar illness, it's also morphing into something new. Around the world, slowly but surely, it's becoming harder to cure. That's a problem when you consider how there are about 616 million new cases of strep throat every year.

New genetic analysis suggests that the bacteria that cause strep throat, group A streptococcus, is on the road towards antibiotic resistance. This type of bacteria is also described at times as flesh-eating bacteria because it can cause necrotizing fascitis — an infection where the skin around a wound rots away.

This analysis identifies 137 strains of group A streptococcus with mutations in a single gene. In turn, these mutations may eventually give the bacteria an upper hand against beta-lactams (think: penicillin). These are antibiotics used to kill dangerous bacteria.

Crucially, these results don't mean that the bacteria are fully antibiotic-resistant. But the analysis does indicate that we're moving in that direction, explains Musser, the paper's first author and director of Molecular & Translational Human Infectious Diseases Research at Houston Methodist Hospital.

Some of these strains are already distressingly good at fighting antibiotics.

"For some of the strains that we studied here, we're talking about four to five times less susceptibility to beta-lactams," Musser tells Inverse. "That's a significant number."

The paper was published Wednesday in The Journal of Clinical Microbiology.

More infectious than we thought

Not all strains of group A streptococcus are equally good at moving from person to person. Recent advancements in genetic testing show that strep has far more infectious power than scientists thought.

In 2014, Musser's lab published a paper in PNAS analyzing over 3,500 strains of group A streptococcus and found that some strains are evolving in a way that benefits the bacteria — and poses a problem to people. These genes are linked to an increased ability to spread around. When these genes thrive, bacteria can become more infectious than it already is.

An open question in the science community is whether or not the bacteria is also developing the ability to fight antibiotics.

In this newest analysis, Musser and his team combed through a database of 7,025 genome sequences found within several different types of group A streptococcus collected from around the world. They were specifically looking for strains of group A streptococcus that have a mutation in a gene called pbp2x, which codes for a protein that penicillin, an antibiotic, can latch onto.

Historically, mutations in that gene have been a calling-card for increasing antibiotic resistance.

Their analysis turned up 137 candidates with relevant mutations. Of those, none were completely resistant to antibiotics when the team tested them in the lab. Still, some were better at fighting them off than the scientists expected.

Considered with previous research, these new results point to the possibility of a frightening future. According to Musser, we could be in serious trouble if the virulent versions of group A strep meet those that are better at resisting antibiotics.

"The concern that we all have is if true resistance gets into one of the bad actor strains that have a very effective way of spreading from person to person," Musser says. "I think there could be easily, in the US alone, millions of cases."

"Globally it would be much greater."

Musser describes this analysis as an early warning. There's still time to fight back. But to do so, microbiologists and infectious disease experts will need to start treating strep very differently in 2020, he says.

Typically experts are taught to assume that group A streptococcus is "universally susceptible" to antibiotics. However, there are already strep patients who "fail treatment," says Musser. After several visits to the doctor and two to three weeks of taking antibiotics, their strep doesn't subside.

The fact that, already, some strains of strep that are getting better at resisting those drugs suggests that we may need to pay a bit closer attention to patients who may not respond to those antibiotics right away.

Those cases, says Musser, may be the "tip of the iceberg."

"We're fairly certain that some of these folks with antibiotic failures may represent an organism that's like the one we're describing in this paper — one that has two or three or four times greater chance of surviving antimicrobial treatment," he says.

"Here, at least we have a fighting chance."

What happens if people do end up with this durable form of strep? The good news is that, for the time being, we have other types of antibiotics that may prove useful. But the most sustainable solution, he says, would be to invent a strep vaccine.

Finding a single vaccine that can fight group A streptococcus has proved difficult, mostly due to the variety of different strains that are out there. But there is slow progress. In May 2019, a Nature Genetics paper identified common genes in about 2,000 strains of strep collected from 22 countries. Those genes, the authors argue, present weak spots in the bacteria's genetic code that a future vaccine may be able to exploit.

That paper, which serves as "atlas" of potential vaccine targets, is a preliminary step. Though, Musser also says that the world of group A strep vaccine research is small, noting that "there are a relatively small number of folks that are working on it."

With closer monitoring and increased efforts to create a vaccine, there is a chance that we can stay one step ahead of an infectious organism that's gaining power:

"For most organisms that become resistant, we don't have a real chance to get ahead of the curve," he says. "Here, at least we have a fighting chance."

Abstract: Recently two related Streptococcus pyogenes strains with reduced susceptibility to ampicillin, amoxicillin and cefotaxime, antibiotics commonly used to treat S. pyogenes infections were reported. The two strains had the same nonsynonymous (amino acid-substituting) mutation in the pbp2x gene encoding penicillin-binding protein 2X (PBP2X). This concerning report led us to investigate our library of 7,025 genome sequences of type emm1, emm28, and emm89 S.pyogenes clinical strains recovered from intercontinental sources for mutations in pbp2x. We identified 137 strains that combined had 37 nonsynonymous mutations in 36 codons in pbp2x. Although to a lesser magnitude than the two previously published isolates, many of our strains had decreased susceptibility in vitro to multiple beta-lactam antibiotics. Many pbp2x mutations were found only in single strains, but 16 groups of two or more isolates of the same emm type had an identical amino acid replacement. Phylogenetic analysis showed that with one exception, strains of the same emm type with the same amino acid replacement were clonally related by descent. This finding indicates that strains with some amino acid changes in PBP2X can successfully spread to new human hosts and cause invasive infections. Mapping of the amino acid changes onto a three-dimensional structure of the related Streptococcus pneumoniae PBP2X suggests that some substitutions are located in regions functionally important in related pathogenic bacterial species. Decreased beta-lactam susceptibility is geographically widespread in strains of numerically common emm gene subtypes. Enhanced surveillance and further epidemiological and molecular genetic study of this potential emergent antimicrobial problem are warranted.

More like this
Mind and Body
Jan. 16, 2023
One daily social practice could help stave off dementia
By Elana Spivack
Science
Jan. 21, 2023
A deadly fungal plague swept the world of The Last of Us — is it realistic?
By Tara Yarlagadda
Mind and Body
Jan. 23, 2023
Can spicy food boost our gut health? Here's what the science says
By Katie MacBride
LEARN SOMETHING NEW EVERY DAY.
Related Tags
Share: