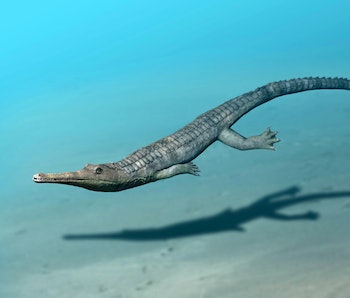 During the earliest days of life on Earth, the ancestors of the ocean mammals we know today looked completely different. Cetaceans, the group that includes modern dolphins, whales, and porpoises, weren’t marine animals at all: They walked on land, had hooves, and occasionally took a dip in the water.

Marine lizards — now-extinct relatives of crocodiles that lived hundreds of millions of years ago — had a similar transition, far earlier than dolphins and whales. They also made the leap from land to water and now, scientists have pieced together exactly how that happened.

When major evolutionary transitions happen — like making the switch from land to water — animals’ bodies have to change in turn. If they don't, they can't survive.

For whales and dolphins, transitioning from terrestrial life to their watery digs required them to develop a significantly different inner ear sensory system. This system is responsible for balance and equilibrium.

In a new study, researchers report that marine lizards went through a similar transition — but evolved on a different timeline, compared to mammals. This finding suggests that refined inner ear systems are essential for survival on the high seas.

The study was published Wednesday in the Proceedings of the National Academy of Sciences.

Thalattosuchians, also known as "sea crocodiles", adapted to live in the water during the Mesozoic Era — probably happened between 125 and 182 million years ago.

Researchers used computed tomography to study the inner ear systems of 18 extinct reptile species, and 14 of their modern relatives. In turn, they saw found that the thalattosuchians that swam in the open ocean had a differently shaped cavity in the inner ear, called a bony labyrinth, compared to the terrestrial species that live today.

In ocean swimmers, that bony structure was shorter and more compact, and specific parts within the inner ear — the semicircular canals and vestibule — were enlarged. Those alterations mirror what the bony labyrinth looks like in dolphins and whales, and confirms that the inner ear bone adaptations were similarly important to ancient reptiles.

Unlike ocean mammals, though, the early crocodile relatives apparently developed their unique inner ear system after a long stage of being semiaquatic: Their skeletons began the processing of adapting, allowing them to become better swimmers before their inner ears caught up.

Mammalian cetaceans, on the other hand, “miniaturized their bony labyrinths soon after entering the water,” the researchers report. (Other mammals, like seals, have seen similar adaptations, but to a lesser extent.)

These findings shed light on how animals adapt to survive in open water: They experience similar changes to their inner ear systems, but their evolutionary patterns are distinctly different.

For the earliest Homo sapiens, bony labyrinths have left "genetic signatures" showing how far Earth's early humans traveled away from Africa — and how they adapted to live in different regions of the world.

In a 2018 study, researchers scanned skulls of hundreds of ancient humans, discovered around the world, to identify differences in the shape and size of their inner ears. Samples came from places including central Europe, Japan, and Indonesia. They found that the further a certain population moved away from Africa, the greater the differences in the morphology of their bony labyrinth.

Changes in location may be as drastic as ditching dirt for the ocean, or as simple as switching continents. But the peculiar bony labyrinth suggests that a tiny part of the inner ear may be a crucial piece of evolving, common across humans, ocean mammals, and reptiles.

Abstract: Major evolutionary transitions, in which animals develop new body plans and adapt to dramatically new habitats and lifestyles, have punctuated the history of life. The origin of cetaceans from land-living mammals is among the most famous of these events. Much earlier, during the Mesozoic Era, many reptile groups also moved from land to water, but these transitions are more poorly understood. We use computed tomography to study changes in the inner ear vestibular system, involved in sensing balance and equilibrium, as one of these groups, extinct crocodile relatives called thalattosuchians, transitioned from terrestrial ancestors into pelagic (open ocean) swimmers. We find that the morphology of the vestibular system corresponds to habitat, with pelagic thalattosuchians exhibiting a more compact labyrinth with wider semicircular canal diameters and an enlarged vestibule, reminiscent of modified and miniaturized labyrinths of other marine reptiles and cetaceans. Pelagic thalattosuchians with modified inner ears were the culmination of an evolutionary trend with a long semiaquatic phase, and their pelagic vestibular systems appeared after the first changes to the postcranial skeleton that enhanced their ability to swim. This is strikingly different from cetaceans, which miniaturized their labyrinths soon after entering the water, without a prolonged semiaquatic stage. Thus, thalattosuchians and cetaceans became secondarily aquatic in different ways and at different paces, showing that there are different routes for the same type of transition.