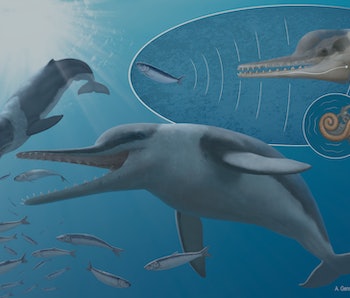 Scientists have discovered the fossilized skull of a 24- to 27 million-year-old ancient whale, proving that echolocation evolved very early on among toothed whale predators. The extraordinarily well-preserved specimen boasted 39 intact teeth and was found in a South Carolina drainage ditch. It’s described for the first time in an article published Thursday in Current Biology. The study authors named the beast Echovenator sandersi, the “echo hunter.”

The American and French scientists analyzed the specimen’s preserved bones, including the tiny structures of the ear. They found that the ear bones had the structures that would allow it to hear high-frequency sound, similar to toothed whales living today. Further, they found facial structures in the skull that indicate the presence of air sacs that would have allowed the animals to produce ultrasonic noise and use this as sonar to locate and chase down prey.

The researchers also compared their specimen to 23 other extinct or living species of whales, as well as the closest living relative of whales: the hippopotamus. Their analysis showed that early ancestors of the whale, the archaeocetes, could hear at high frequencies, even before the group splintered into toothed and baleen varieties, and way before the toothed whales developed the ability to produce high-frequency sound.

Here’s why this is surprising: Only toothed whales (odontocetes) use echolocation to navigate the seas these days, and baleen whales (mysticetes) mostly hear in the normal range. Echolocation is more effective at high frequencies, which is why bats independently evolved the ability to produce in and hear ultrasonic noise. But echolocation works at frequencies in the normal human range, too, which is why some blind people will spontaneously begin to making clicking noises as a way to sense their physical space.

You might assume that the echolocation would have emerged in whales, too, with natural selection doing its thing over many generations to favor those hearing in higher frequencies. But this, according to these new findings, was not the case. It seems to be that there was an advantage to hearing high-pitched noises very soon after the whales’ terrestrial ancestors took to the sea.

Some prey species of both toothed whales and bats have the ability to hear, but not make, ultrasonic noise, presumably evolved to better avoid predators. If ancient whales found that the sea they came upon was full of high-frequency noises they could hear, who or what was making them? That’s another question for another fossil to answer.