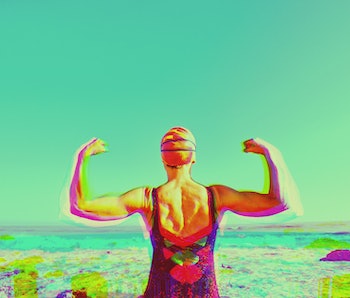 While it's established that cardio and weight lifting build muscle, new research illuminates the pivotal mechanisms driving this positive dynamic. It turns out, endurance exercise boosts the growth of vital muscle stem cells and fundamentally changes their metabolism — setting off a cascade of regenerative effects.

Kowaltowski is a biochemist at the University of São Paulo. Her team's findings were published in October 2020 in the Journal of Cachexia, Sarcopenia, and Muscle.

The study was conducted in mice so Kowaltowski cautions it's too early to translate the findings directly into people. But in the future, this research could inform strategies to help people bounce back from injury, combat the loss of muscle mass that comes with aging, and gain benefits even if people can't work out.

"This is a first step in developing strategies to benefit the muscle through mechanisms other than exercise in the future, since not everyone can exercise," Kowaltowski says.

LONGEVITY HACKS is a regular series from Inverse on the science-backed strategies to live better, healthier, and longer without medicine.

HOW THIS AFFECTS LONGEVITY — To better understand the mechanisms driving the benefits of exercise, Kowaltowski and their team put mice through a five-week aerobic training program, complete with daily treadmill runs along with periodic speed tests.

Then they compared those results to inactive mice, analyzing the animals' muscle tissue, metabolic changes, and aerobic capacity. After the program concluded, researchers also injured the muscle tissue in both groups of mice, to observe their regenerative capacity.

The team found that aerobic exercise changed how the animals consumed oxygen, metabolized sugar, and how tired they were when they weren't exercising. Exercised animals were also leaner, as indicated by lower fat areas and body mass, and had more recently formed muscle fibers as well as fewer signs of inflammation.

These findings confirmed that the endurance-exercised animals repaired injured muscles more efficiently than sedentary mice — a result that sheds light on how people can build and maintain muscle over the long run.

"Muscle maintenance is very important to ensure healthy aging, so understanding how the muscle repairs itself, how muscle stem cells behave and respond to stimuli, and how exercise benefits these repair mechanisms will hopefully lead us to better strategies to keep our muscles healthy as we age," Kowaltowski says.

WHY IT'S A HACK — After the initial experiments, the team isolated muscle tissue and zeroed in on satellite cells — stem cells that live in skeletal muscle and regenerate muscle throughout adulthood.

It's well known that strength training and weight lifting boost satellite cells' growth. But until now, researchers weren't sure how aerobic exercise like jogging, biking, or swimming, influenced these vital cells.

"These cells are constantly activated, but over time they can become fatigued and stop self-renewing. This is what happens in muscular dystrophy and diseases involving loss of muscle mass such as cachexia or sarcopenia," study co-author Phablo Sávio Abreu Teixeira explained in a related statement.

The team found endurance exercise increased proteins involved in quieting and activating these satellite cells, and in turn, enabled self-renewal or differentiation.

"Surprisingly, we found them to consume less oxygen, as if they had become more economical," Abreu says.

"The result is completely new and provides a clue as to how we can modulate muscle stem cell function in the future," Kowaltowski says.

SCIENCE IN ACTION — Based on these findings, there's no ideal workout regimen or go-to workout to promote muscle regeneration, Kowaltowski says. However, researchers do know working out regularly — doing aerobic or endurance, strength training, flexibility, and balance exercises — will help people bounce back faster from exercise, support their physical and mental health, and live a longer, healthier life.

The Centers for Disease Control recommend aiming for 150 minutes, or two and a half hours of physical activity a week.

Background: Skeletal muscle stem cells (satellite cells) are well known to participate in regeneration and maintenance of the tissue over time. Studies have shown increases in the number of satellite cells after exercise, but their functional role in endurance training remains unexplored.

Methods: Young adult mice were submitted to endurance exercise training and the function, differentiation, and metabolic characteristics of satellite cells were investigated in vivo and in vitro.

Conclusions: Our results indicate that endurance exercise promotes self‐renewal and inhibits differentiation in satellite cells, an effect promoted by metabolic reprogramming and respiratory inhibition, which is associated with a more favourable muscular response to injury.

More like this
Mind and Body
5.4.2022 10:00 AM
Can dry scooping boost performance? Experts explain the viral workout hack
By Ali Pattillo
Mind and Body
5.3.2022 2:00 PM
Study: To fight off depression, here’s how much exercise you really need
By Claire Cameron
Science
5.8.2022 1:00 PM
Should you exercise your dog on a treadmill? Here's what veterinarians say
By Tara Yarlagadda
Related Tags
Share: