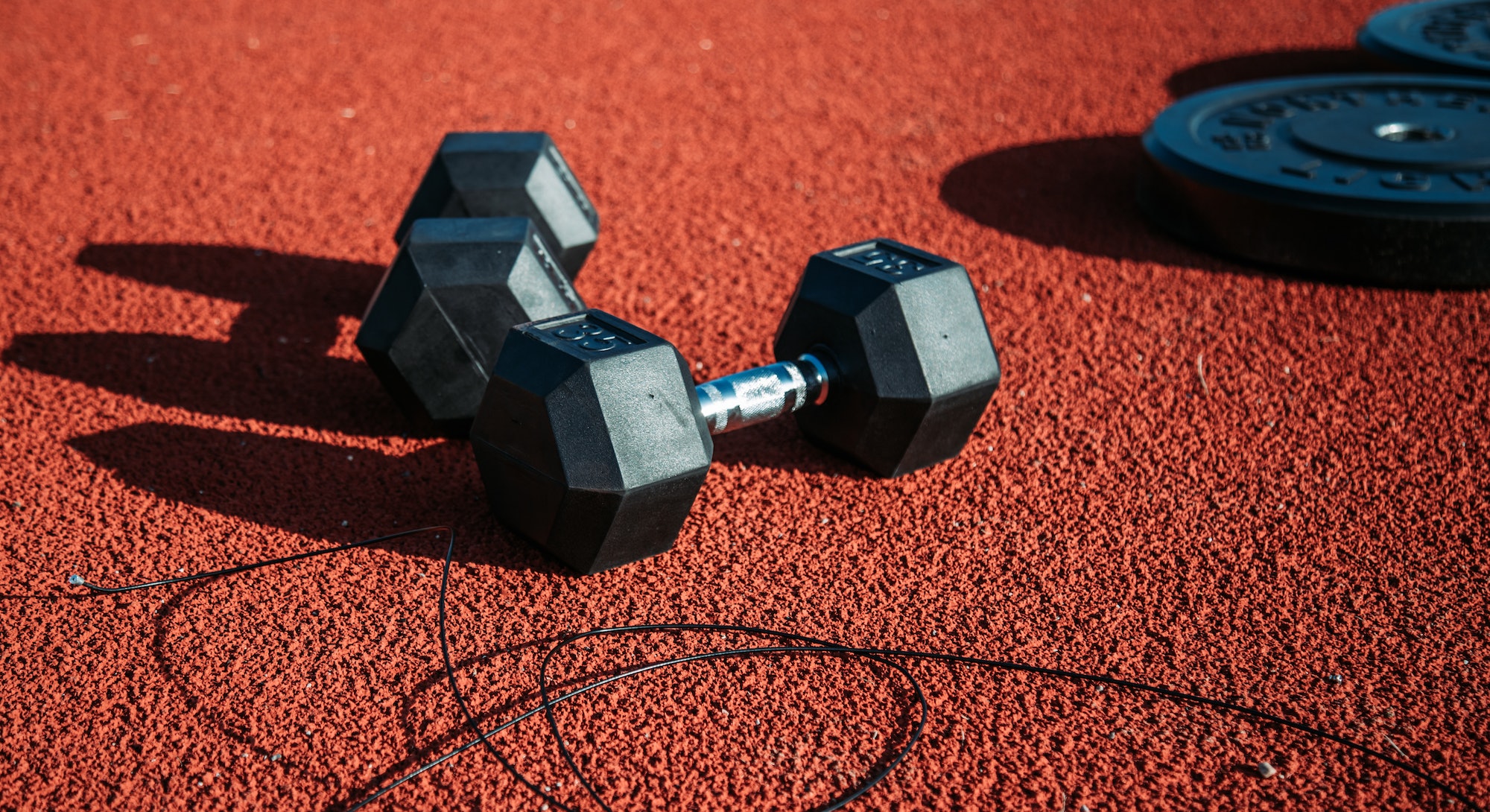 Slim, yet toned. Strong, but thin.

These words are often tied to the “ideal” body, but to attain this aesthetic, most trainers and nutritionists will tell you to both get stronger and cut fat. But because muscle weighs more than fat, getting stronger can add pounds, while trimming fat means losing them. And for many, the higher number on the scale can be terrifying.

There is a way to lose weight and gain muscle simultaneously: A process sometimes known as “body recomposition.” It’s tricky, not only because it involves intense exercise but also because it requires overcoming fear of weight gain. To “recomp,” people must replace goals of dropping pounds with aims of optimizing health.

Doing so isn’t easy because weight is tied so closely to the desire to be thin, which itself is driven by cultural pressures. Weight stigma — discrimination or stereotyping based on a person’s weight — is pervasive in society, Jeffrey Hunger, Ph.D., a social psychologist from Miami University of Ohio, tells Inverse.

“If you’re already in a thinner body, it is to stay thinner because that means you will be free from the stigma, or if you are in a higher weight body or a fatter body, it is to eventually try to shed that stigma to try to escape it,” he says.

Letting go of weight stigma, or the fear of it, means celebrating your body in whatever form it takes. Initiatives like the Health at Every Size movement, which prioritizes healthy behaviors instead of weight loss, may help you do that. But it will be hard: As research shows, weight stigma starts young — really young.

As early as preschool, the “fat is bad” mentality spreads. A 1998 study published in the Journal of Applied Developmental Psychology found that children as young as three held negative attitudes towards people with overweight builds. Weight stigma continues into adulthood, as overweight and obese people face discrimination from employers, health care workers and even loved ones. Mass media projects a slim aesthetic and offers infinite strategies to getting it. Standard runway model sizes are 0-4, while the average American woman wears size 16-18.

With this cultural context, stepping on the scale can trigger mixed emotions: Fear of weight gain, satisfaction of seeing fitness progress, or even ambivalence towards the number reflected back. But contrary to popular belief, weight and body mass index (a simple calculation of body weight divided by height) may not be the best way to gauge fitness.

Yes, BMI can help measure health and wellbeing, but it has serious limitations. According to the National Heart, Lung, and Blood Institute, the higher your BMI, the higher your risk for certain diseases such as heart disease, high blood pressure, type 2 diabetes, gallstones, breathing problems, and certain cancers. But, other metrics, particularly measurements of belly fat skinfolds or waist to height ratios, are much more predictive of these negative health effects than BMI.

Why Weight Isn’t Everything

Doctors are still trained to think of fat bodies as inherently unhealthy bodies, Hunger says, but this approach is flawed.

“There’s so much variability even among fat people just like there is variability even amongst thin people. And one of the things that we’ve tried to advocate for is just move beyond that number. There are all of these other really important clinical indicators of health at your disposal like blood pressure,” he says.

Also, many people who fall in the overweight category of BMI classifications simply weigh more because they have an athletic, muscular build. A 2013 study published in Nature estimated that almost 75 million Americans are mislabeled as cardio-metabolically unhealthy based on their BMI measurements.

Over the last 30 years, the Health at Every Size (HAES) movement emerged, and research shows it improves markers of health and happiness. “HAES is about this notion that health is accessible to everyone regardless if they are thinner or if they are fatter. And that we really should stop using weight as a metric in the clinical context and the personal context,” Hunger says.

Instead of valuing one body size over another, the HAES philosophy advises making healthy lifestyle choices detached from weight outcomes.

HAES aside, another way to overcome fear of weight gain while you gain muscle, Hunger says, is to throw your scale in the garbage.

Hunger stresses to frequent self-weighers that the number that shows up on the scale throughout the day depends on a multitude of factors. “Your weight can fluctuate like five to nine pounds a day, depending on if you had too much soy sauce with your Chinese food that night or if you had an extra heavy leg day and your muscles are really pumped full of fluids,” he says.

Since weight and BMI aren’t our best guides to measuring health, muscle mass and body fat percentage may be our next best alternatives.

The Power of Muscle

Getting strong has staggering effects on the body. Higher amounts of muscle tone buffer the effects of aging, protect against falls and injury, increase mobility and strength, lower mortality, and increase bone density. Even at rest, muscle tissue is metabolically active, burning even more calories when you aren’t exercising.

But muscle’s sometimes counterintuitive properties make it a tricky part of a fitness strategy. To build muscle, the body needs extra energy to power through exercises that challenge muscles and create microtears in them as well as to rebuild them into bigger and stronger tissue during rest and recovery.

That extra energy comes from the body’s energy reserves: fat or muscle. When a person exercising to lose weight drops a pound of body mass, that pound is mostly made up of fat, but about a third is muscle. So in some cases, people lose weight thinking they are becoming healthier, when in fact, they are losing healthy muscle along with fat.

To further complicate the process, increasing muscle mass can cause the scale to creep up, and this is where the fitness paradox begins. Watching weight rise as we exercise can be maddening because we’ve been conditioned to draw two simple associations: weight gain is bad, and weight loss is good.

But in the case of building strength, weight gain is a good thing — not the worst-case scenario that so many people fear.

The Danger of Fat

While muscle tissue is metabolically helpful, too much body fat is another story. Fat is a normal part of the body and acts as a source of fuel, but in excess it can cause serious health issues, especially when it forms around the abdomen (the muffin top or stomach pooch).

Excess body fat contributes to major causes of death and disability, including heart attacks, high blood pressure, cancer, diabetes, stroke, osteoarthritis, fatty liver disease, and depression. And a huge portion of the population carries that dangerous extra mass — the World Health Organization estimates that around the world, 39% of adults aged 18 years and over were overweight and 13% were obese in 2016. In the US, the problem is even worse: almost 40% of Americans are obese, according to the Centers for Disease Control.

But as we’ve learned, weight alone is a poor metric to gauge a person’s risk of these diseases. That’s why measuring fat in isolation is emerging as a better solution. In a 2016 study in BMJ Open, researchers showed that using a simple waist circumference to height ratio, instead of BMI or weight alone, is a simpler and more predictive tool of health risks.

Weight loss, nevertheless, remains a goal for many people, whether for health or aesthetic reasons. Despite so many of the body’s systems seeming to work against each other, it is possible to achieve the traditional holy grail of fitness — building muscle while losing weight — but it’s challenging and slow.

Doing so requires “body recomposition,” a process that aims to lower body fat percentage and build muscle tone simultaneously, helping you lose weight or maintain a healthy weight over the long term. “Body recomp,” which combines strength training with cardio, isn’t a short-term fix — it requires steadfast commitment to an intense regime. Most people attempting it use strength training combined with dietary changes, like cutting carbs or increasing their protein intake.

A 2016 study published in the American Journal of Clinical Nutrition found that the way to preserve lean muscle while losing weight may be protein — and lots of it. In that month-long study, 40 overweight men changed their lifestyles drastically. All of them cut their food intake by 40 percent, but half the group upped their protein while the other half ate normally. The group worked out hard, six days a week, doing high-intensity interval training and full body circuits.

Alternatively, there’s the traditional “bulk then cut” approach, focusing on building muscle and eating a calorie surplus for a period, then losing weight through calorie restriction and cardio. This, too, may not be sustainable in the long term, just as a weight-centric health paradigm may not be, either.

Focus on Function, Not Form

Curbing weight fixation can be hard, but there are a few ways to approach it. Focusing on body functionality helps, instead of chasing a particular aesthetic, Hunger says.

But if you struggle to get past the psychological hurdles of gaining weight, even if it means you’re getting fitter, you may consider professional guidance. Hunger suggests consulting a therapist, if you have access to one.

"Undoing that many years of psychological trauma that comes with living in a fat-phobic society is tough."

“Assuming this person is an adult, they’ve spent 30 years being told what is and what is not an acceptable body. So undoing that many years of psychological trauma that comes with living in a fat-phobic society is tough. Oftentimes, you need a little backup.”

But if therapy or consulting a health professional is not possible, there are plenty of other ways to keep weight gain anxiety at bay. “It’s as simple as downloading a free or cheap mindfulness app on your smartphone and starting to get more comfortable living with the uncomfortable and living in the moment, even if those feelings are uncomfortable,” Hunger says.

And ultimately, regardless if you achieve body recomposition or are successful in your health goals, it’s important to value your body, in whatever form it takes.

“I don’t expect everyone to be shouting body positivity from the rooftops overnight, but I would love to get people closer to sort of a sense of body acceptance or that they are more or less neutral towards their bodies, that they don’t hate their body because it’s fat or because it’s unruly or because it doesn’t fit a number that they’re expecting.”