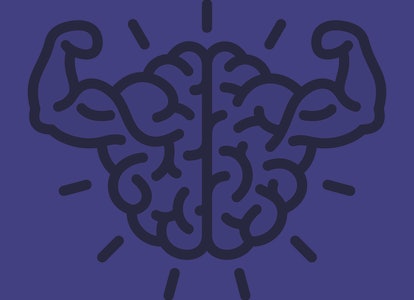 For decades, scientists have known lifting weights gradually makes you physically stronger. But according to new research, the workout initially changes the brain before changing muscles.

In a fascinating study published Monday in the Journal of Neuroscience, scientists broke down these neural adaptations in an unconventional way: They taught monkeys how to strength train and examined how the activity transforms the brain and body.

The experiment revealed that weightlifting strengthens the nervous system through a motor tract called reticulospinal tract, weeks before any muscle is added.

“Strength isn’t just about muscle mass," co-author Isabel Glover, a researcher at Newcastle University, tells Inverse. "When you start lifting weights, you get stronger because the neural input to your muscles increases. It’s only a few weeks later that the muscles themselves start to get bigger."

The study was conducted in macaque monkeys. Their brain systems, when it comes to movement, are similar to people. The results should be "very closely translatable" to humans, co-author Stuart Baker, also a researcher at Newcastle University, tells Inverse.

"People do see benefits quite early on in terms of becoming stronger – because the nervous system changes mean they can activate their existing muscles more efficiently," Baker says. "But they don’t see changes in muscle mass. That takes longer and seems to come after the changes in the brain and spinal cord."

If people don't immediately notice stronger limbs after they start weight lifting, they should realize that something else is happening: Powerful neural changes in the brain that can lead to long term physiological payoffs.

These results are not just relevant to bodybuilders pushing for a new personal best, Glover says.

"If we understand the neural mechanisms of strength then we can start to think about how to help individuals suffering from a loss of strength, such as following a stroke.”

Researchers trained two female macaque monkeys to pull a weighted handle with one arm by rewarding the animals with food. Over the course of three months, researchers increased the resistance of a weighted handle week by week. The monkeys completed daily strength training sessions including 50 weighted pulls (moving the handle at least four centimeters).

The training was "quite difficult," Baker says. "We started by teaching the monkeys just to pull the lever with no weights attached. Then we slowly increased weights, all the time coaxing them to try the next level."

"At times it was a challenge to keep them motivated," Glover adds. "Think of how many people quit the gym. But after a few months, they reached their goal of 50 reps at 6.5 kilograms."

These monkeys only weighed 6 to 6.5 kilograms (14.3 pounds) so that’s comparable to a human doing 50 one-armed pull-ups — an impressive display of strength, Glover adds.

Daily, the team also stimulated the monkeys' motor cortex and two motor tracts— the corticospinal tract (CST) and reticulospinal tract (RST). They then measured the resulting electrical activity in their arm muscles.

The main pathway, CST, carries movement-related information from the cerebellum to the spinal cord. This helps animals and humans move their limbs and trunk such as walking or reaching. Meanwhile, the evolutionary old pathway, RST, which is considered to be less dominant, influences posture and muscle tone.

Throughout the training regimen, the team found significant increases in the strength of the evolutionary old pathway (RST), and no change in the main pathway (CST).

"Therefore, although the main pathway is typically associated with our most sophisticated or complex movements, the evolutionary old pathway appears to be the driving force behind strength," Glover says.

After three months of strength training, stimulating the RST elicited a greater response in the side of the spinal cord connected to the trained arm. Overall, outputs from the RST became more powerful during weight training.

An essential link between brain and body — Baker explains that, while it's been known that people new to weightlifting initially get stronger because of increasing connections in the nervous system — not by growing bigger muscles — why this happened wasn't clear.

This study shows that the RST pathway may be responsible.

"The results show that strength training first increases the strength of connections from the reticulospinal tract to the spinal cord, allowing muscles to be activated more strongly," Baker says. "This happens early on — only later do muscles grow larger, which adds even more to the maximum strength."

This indirect pathway is also involved in stroke recovery. This implies that "improving the function of a hand-rendered weak by a stroke might be using the same mechanisms as strength training in a healthy young bodybuilder," Baker explains.

"It’s interesting that a healthy young bodybuilder working out is causing the same changes in their nervous system to get stronger as occur in a stroke survivor who is recovering the use of their limb," he continues. "It might be that resistance training [weight lifting] provides a fairly direct route to stimulate these changes in the reticulospinal tract."

If so these results suggest that lifting weights could be a useful approach when help stroke patients with recovery, Baker explains.

The study, the first to study RST response to strength training in non-human primates, calls for more attention on RST and its link to strength. Understanding the complex factors leading someone to get strong could inform new exercise techniques and new treatments for neurological damage in the future.

Abstract: Following a program of resistance training, there are neural and muscular contributions to the gain in strength. Here, we measured changes in important central motor pathways during strength training in two female macaque monkeys. Animals were trained to pull a handle with one arm; weights could be added to increase load. On each day, motor evoked potentials in upper limb muscles were first measured after stimulation of the primary motor cortex (M1), corticospinal tract (CST) and reticulospinal tract (RST). Monkeys then completed 50 trials with weights progressively increased over 8-9 weeks (final weight ~6kg, close to the animal’s body weight). Muscle responses to M1 and RST stimulation increased during strength training; there were no increases in CST responses. Changes persisted during a two-week washout period without weights. After a further three months of strength training, an experiment under anesthesia mapped potential responses to CST and RST stimulation in the cervical enlargement of the spinal cord. We distinguished the early axonal volley and later spinal synaptic field potentials, and used the slope of the relationship between these at different stimulus intensities as a measure of spinal input-output gain. Spinal gain was increased on the trained compared to the untrained side of the cord within the intermediate zone and motor nuclei for RST, but not CST, stimulation. We conclude that neural adaptations to strength training involve adaptations in the RST, as well as intracortical circuits within M1. By contrast, there appears to be little contribution from the CST.