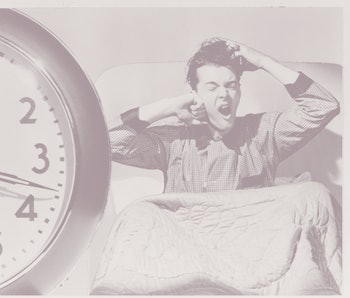 In 1964 Randy Gardner stayed awake for 11 days, breaking the Guinness World Record for the longest period of voluntary sleeplessness. This category is no longer offered by Guinness; it’s just too dangerous. Gardner experienced mood swings and hallucinations. He’s lucky — rats deprived of sleep die in a few weeks.

It is obvious mammals need sleep. The enduring question, however, is why. We know sleep is genetically controlled, but our understanding of these genetic mechanisms is murky. Was there something about Gardner that helped him withstand sleeplessness? And why did sleeplessness rock his mood and mind?

The answer is coming via incremental studies, most recently a paper published in the journal JAMA Psychiatry. In the study, researchers explore the relationship between chronotype — a manifestation of the circadian rhythm which influences one’s propensity to sleep at different times — genes, and mental health.

In the process, the team untangles and validates a link between these three components and points to a seemingly too simple solution: One can lower their risk of major depressive disorder by just changing their sleep habits by one hour.

Céline Vetter, an assistant professor at the University of Colorado-Boulder, is the study’s senior author. What this one-hour change does not endorse, she tells Inverse, is sleep restriction. Her team proves sleep timing is relevant when it comes to shifting your sleep onset and offset. “We do in no way suggest that fatigue or short sleep are helpful,” she says.

Instead, this is about a one-hour earlier “sleep midpoint” — this is the halfway point between bedtime and wake time. In this study sample, this shift corresponded with a 23 percent lower risk of major depressive disorder. For example, if a person usually sleeps from 1 a.m. to 8 a.m. but shifts their habit to midnight to 8 a.m., they are engaging in a behavior that could cut their risk.

How the scientists did it — This study included 850,000 participants, including 85,000 who wore sleep trackers and 250,000 who filled out surveys on their sleep habits. The participants indicated if they were more of a “night owl” or “morning lark,” and the average sleep midpoint was 3 a.m.

The participants’ genetic data was anonymously pulled from either the UK Biobank or the DNA testing company 23andMe.

It’s known that 340 genetic variants influence a person’s chronotype. In the study, the team took all of this information and looked for connections between these different factors, ultimately finding that people with genetic variants that predispose them to wake up early also tend to have a lower risk of depression.

A “genetically proxied morning diurnal preference” corresponds to a one-hour-earlier sleep midpoint, the team writes. Diurnal preference is one’s preference for timing daily activities; it shapes a tendency toward “morningness” or “eveningness.” Animal models suggest it has a genetic basis.

But while this implies that a one-hour shift would help night owls, it’s unclear if early risers would benefit. It’s also unclear if there’s an ideal time frame to sleep in. That’s what follow-up studies need to look into, Vetter says.

Why is there a connection between sleep, genes, and mood?

On the surface, the relationship between sleep and mood is obvious. You just have to look around you — like Gardner and his wild mood swings — or at yourself. Nights of bad sleep often result in days where you just seem off. Other studies also validate a connection. For example, depression can be especially pronounced in the morning, and there’s a genetic link between sleeplessness and depression.

So we know genes play a part in influencing sleep habits and sleep, in turn, influences mood and mental health. But there are still so many more details scientists are trying to unravel. Another factor at play could be that one’s chronotype and diurnal preferences are a mismatch for society. It’s difficult to be a night owl in a 9-to-5 world.

Then there’s the question of whether this one-hour shift would really make a difference. This data suggests yes, but it needs to be validated in another study.

In the meantime, the working hypothesis is that it's greater exposure to the light of day that may influence better mood — more sunlight means more positive hormonal impacts. “Keep your days bright and your nights dark,” Vetter advises. Shifting your sleep schedule is one thing, but it should be paired with more time outside and fewer electronics in the evening.