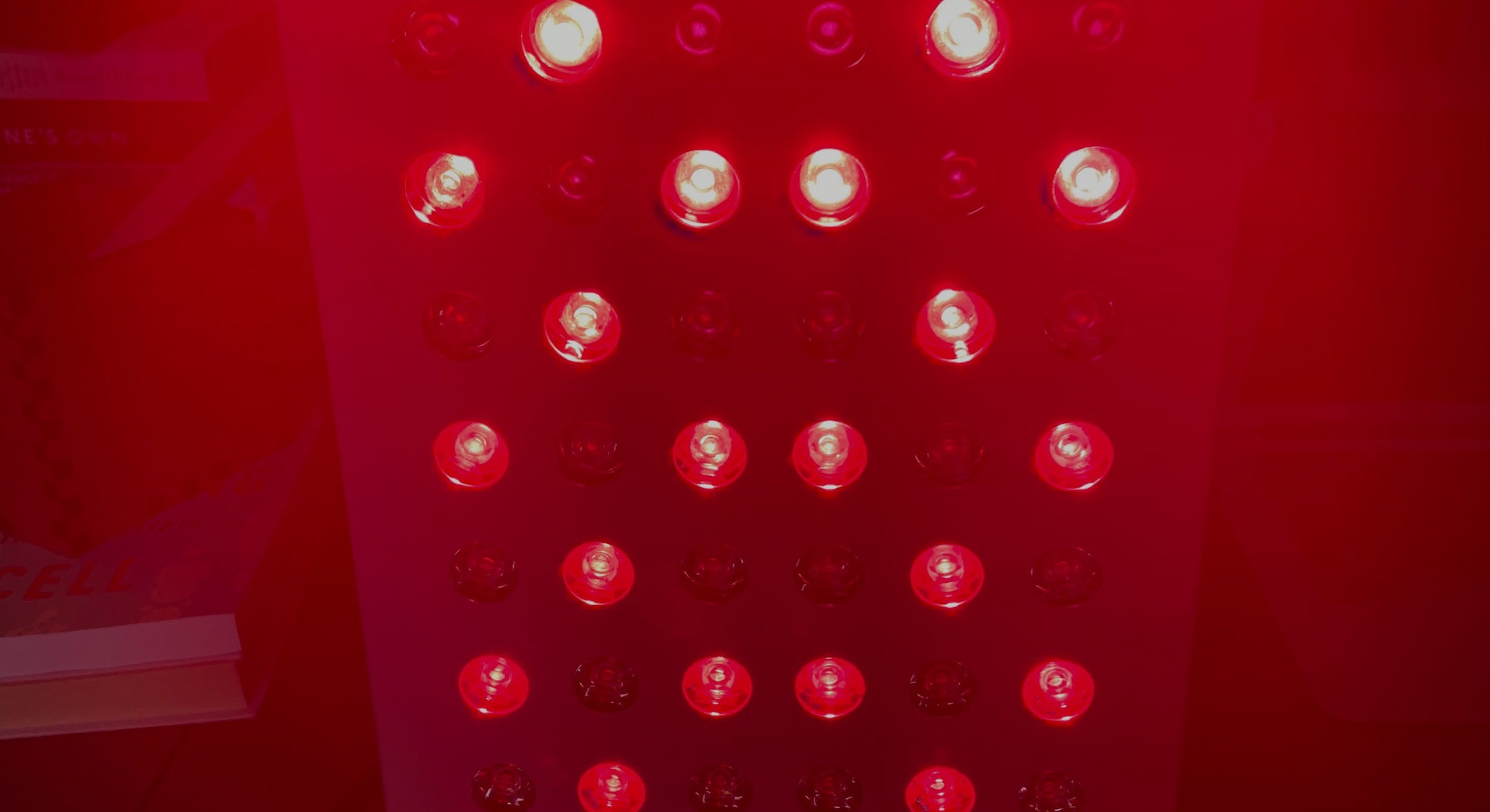 Every morning, Ben Greenfield strolls into his office and strips off his clothes.

He flips a switch, flooding the room with a bright red glow. Then he stands naked in the red light for 20 minutes.

“It seems to like, wake you up a little bit; it kind of simulates sunrise," Greenfield tells Inverse. "And it's almost mildly addictive — the feel-good effect of how you feel after you use one of these."

Greenfield, a 39-year-old fitness instructor, is an evangelist for red light therapy, a treatment that's increasingly popular in the world of sports, beauty, and biohacking. Some converts to red-light therapy treatment soak in the ruddy glow for a very personal reason.

“You don't really notice any tingling or sensations," Greenfield says. "What I notice is that I get a little bit of an increase in size and my erections are definitely bigger at night on the days that I use it."

Men like Greenfield have started pointing lasers at their genitals, hoping to boost sex drive, testosterone, and fertility. While low-level laser therapy has not studied extensively on humans — a few animal studies suggest it can accelerate sperm production. One study in humans suggests it can increase testosterone levels and sexual satisfaction.

The question remains: Is this alternative treatment the answer to better sex and hormone health, or is it an expensive waste of time?

Advocates say it can be the “little blue pill without the nasty side effects", while a leading light therapy doctor says it doesn't match the buzz. As more high-tech light devices flood the market, men who see the ads must ask: Is this worth dropping your pants and basking in the glow?

Originally developed in 1967 by Hungarian scientists, red light therapy, scientifically known as photobiomodulation or low-level laser (light) therapy, has made a comeback in the last decade.

Michael Hamblin, a researcher at Massachusetts General Hospital and professor at Harvard Medical School, explains in a 2017 research paper on the topic that the treatment was confined to a “scientific wasteland,” and widely considered “snake oil.”

“Low-level light therapy has so much potential to impact health, because it ultimately alters how the cells in our body function," Hamblin tells Inverse. "Improving the conditions of cellular respiration exerts a whole host of positive effects across the body."

Indeed, some studies suggest light therapy stimulates mitochondria, a.k.a. the “powerhouse” of a cell, and increases the production of adenosine triphosphate, the organic chemical that carries energy in the body and plays a big role in metabolism. But how it affects the body isn’t totally understood.

"Low-level light therapy has so much potential to impact health."

Capitalizing on this emerging research are businesses that offer a wide range of light beds, boxes, lamps, lasers, infrared saunas, and panels for personal use. The devices are designed to deliver wavelengths of natural red or near-infrared light through lasers or LED lights (at wavelengths of about 600-1000 nanometers). They range in price, from relatively cheap ($100) up to around $4,000.

The global light therapy market is booming, poised to hit one-billion by 2025. Most machines are generally considered safe but hold the potential for side effects such as eye damage or skin burns. (They're considered Class II medical devices by the FDA, posing a “moderate to high” risk to users.)

In the last five years, light therapy researchers and red-light therapy companies set their sights on men like Greenfield — the guy who gets naked every morning in his home office.

“The impact of [low-light therapy] on sexual health is an emerging field, but I see its potential to improve sexual function and libido with recent studies,” Hamblin says. “It has been shown to improve sperm function and may have applications in increasing fertility in both men and women.”

Research on sexual health applications of red-light therapy is relatively minimal in men, and basically nonexistent for women. A few studies in animals suggest red light therapy might influence Leydig cells — the body’s sperm producers, which live in the testicles. Another study in humans suggests red light therapy can increase testosterone levels and sexual satisfaction.

"Not a single [study] has any convincing scientific evidence."

For Dr. Marc Goldstein, a urologist at Weill Cornell and the Director of Male Reproductive Medicine and Fertility, the research is “promising,” but suffers from small sample sizes and poor design. More rigorous studies need to be done before light boxes become a mainstay in hospitals or clinics outside of dermatology.

“You know how many men's health formulas are out there that purport to increase testosterone levels, increase your energy levels, and increase erections?” Goldstein asks me.

“There's absolutely no controlled study that proves that. None! And almost all the studies that purport to improvement — whether it's light therapy or the multitude of men's products out there — not a single one has any convincing scientific evidence or properly done studies.”

The lack of robust scientific evidence isn’t stopping men, like Jay Wiles, a 31-year-old clinical psychologist, from going balls out.

He turned to red-light therapy after experiencing some troubling cognitive symptoms seven years ago: brain fog and issues concentrating, that he says, were caused by chronic mold exposure.

Wiles says he exhausted all his options, and bought a transcranial red light therapy device called a “Vie Light.” (Wiles has an affiliate partnership with the Vie light company and gets a kickback from every sale linked from his personal website.)

Now, after seven years of daily red light therapy sessions with a full-body and transcranial device, Wiles feels “limitless,” referencing Bradley Cooper’s unbridled focus and clarity in the 2011 film by the same name.

Red light therapy has been an “absolute success in my personal life,” Wiles tells Inverse. Both Wiles and Greenfield test their blood regularly and report higher testosterone levels.

“My desire to engage in sex as well as my overall performance — that would be the ability to last longer and enjoy the time more — were increased due to the utilization of these of these devices,” Wiles says.

How it gets around the "fear"

Sexual health issues — from “low T” to erectile dysfunction — can be challenging to treat because of the social stigma, Goldstein explains. There’s a “fear,” the urologist says. Many men are ashamed and avoid seeing a doctor.

“If they can get something over the counter that's purported to help them, millions of men will be willing to try it and maybe they would never buy it again,” Goldstein tells Inverse.

“Good advertising and good marketing will create a market for a product, whether it's proven to be of value or not.”

Goldstein doesn’t reject red-light therapy as a sexual health solution completely. It could be a helpful add-on treatment for fertility or sexual dysfunction, because of the way it affects the mind, not the reproductive organs. A 2018 pilot study found red-light therapy had a moderate “antidepressant effect” for people with major depressive disorder.

Depression, sexual dysfunction, and infertility are often linked: roadblocks in intimate life take a toll on men’s psyches, Goldstein explains. About one-third of his patients dealing with infertility also deal with depression, he says.

If there’s a way to mitigate this distress, even if it’s a placebo effect, it could be worth it, Goldstein says. Proven things that can help are regular exercise, meditation, and a healthy diet (Goldstein recommends eating the Mediterranean diet).

“I can't think of any downstream consequences of light therapy other than that it may delay the man getting properly examined and evaluated for appropriate treatment,” Goldstein says.

“I think by all means go ahead and try it. There's no downside, perhaps the effect on the wallet.”

On top of using red light, both Greenfield and Wiles eat healthy, work out regularly, and practice stress-management techniques. Which habit, or a combination of each, helps them “optimize” their sex life or their physical health isn’t clear.

Even though the research doesn’t match their claims — yet— Greenfield and Wiles have no intention of slowing down.

“Before I go and give a presentation or if I'm giving a lecture or even if I'm just seeing a patient in clinic, I'll go ahead and throw that thing on and I will feel like a million bucks," Wiles says. "I’ve noticed increased overall sexual health, sexual satisfaction, and stamina."

Recently, Greenfield has been shining the light for one very specific reason: He and his wife are trying for a baby.

“Sometimes if I know I've got like a date night with my wife or we're going to have sex that night, I'll wait until the evening to do the treatment because the immediate effects are even better, especially the blood flow," Greenfield says.

"Erectile quality is just better right after you use it.”