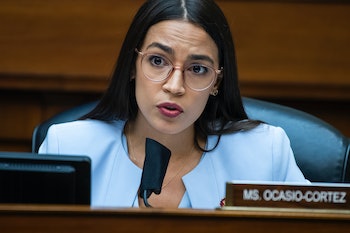 For the second time, Representative Alexandria Ocasio-Cortez is proposing legislation that would remove barriers to federal research on the therapeutic potential of psychedelics like MDMA and psilocybin.

The Congresswoman from New York’s 14th congressional district is hoping to overturn language that’s been attached to legislation funding the U.S. Departments of Labor, Health and Human Services, and Education since 1996. This rider prohibits the use of federal funds for “any activity that promotes the legalization of any drug or other substance in Schedule I.”

While there has been some political will for overturning Schedule 1 research barriers in relation to cannabis, at the federal level, few politicians are willing to discuss widespread changes to legislation regarding psychedelics. Ocasio-Cortez’s proposed amendment is notable because it specifically points to the therapeutic value of these substances.

The amendment strikes the prohibition of the use of funds to be used for activity in relation to Schedule 1 substances. This, in turn, would allow researchers to request financial support to study drugs already shown to be effective in treating conditions, like ibogaine and LSD. The National Institutes of Health is the world’s largest public funder of medical research.

If approved, the U.S. government wouldn’t be the first at the party. Australia, for example, has already approved a bill funding research into the therapeutic uses of psychedelics.

Ocasio-Cortez’s latest amendment is attached to a bill that would fund multiple agencies. The Congresswoman’s office didn’t respond to Inverse about her rationale for introducing the amendment now, but there are a few likely factors:

Ultimately, however, Ocasio-Cortez seems dedicated to this cause, regardless of the political winds.

Ocasio-Cortez proposed similar legislation in the House of Representatives in December 2019, where it met a resounding defeat. Only 22 percent of the House voted to approve the amendment: seven Republicans and 84 Democrats.

What would happen if the research barriers on psychedelics were overturned?

If federal regulators could be convinced of the medical use of substances that are currently classified as Schedule 1, the “no medical use” standard would no longer apply, and substances could be reclassified.

For now, most psychedelic research is funded by private foundations, wealthy donors, and venture capital.

The Inverse analysis — It seems unlikely that an amendment on a subject as politically controversial would go from 22 percent support to a Filibuster-proof majority of 60 percent — and there’s no indication that President Biden would ultimately approve it — but that’s somewhat beside the point.

Controversial federal legislation needs public pressure and politicians at the federal level to champion it. Ocasio-Cortez is one of the most high-profile people in Congress. Sustained pushes from legislators like Ocasio-Cortez are an essential part of moving the issue forward and hopefully getting Congress and the President to a place where the amendment can pass and become law.