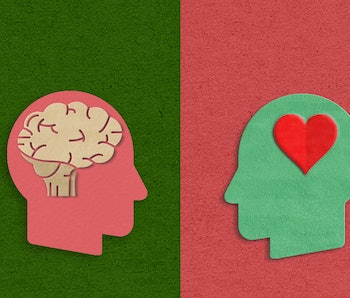 The heart and the head are often set up as a vital dichotomy within human beings. The heart is all fun and romance, the head all business and logic. The heart is fickle and often tricked, the head is empirical and obedient. Of course, thanks to science we know that this is all nonsense. But scientists are also just getting to grips with how heart health affects mental health and vice versa.

This is an adapted version of the Inverse Daily newsletter for Tuesday, May 10, 2022. Subscribe for free and learn something new every day.

In today’s edition of Inverse Daily, read about how physical health and emotional well-being intersect and drive each other, execises to combat sitting at your desk all day (hi!), and landmark physics discoveries coming to a particle accelerator near you.

This is important: Uninterrupted periods of physical inactivity of six or more hours are as reliably a risk factor for premature death as are obesity and smoking. Studies have linked that kind of idleness — pushed on a large portion of the workforce through our information-centered, laptop jockey economy — to an increase in the risk of death from a chronic health condition by 19 and even 25 percent.

But, some casual behavioral adjustments may help. In an intervention study published last month in the Journal of Science and Medicine in Sport, white-collar workers improved signs of metabolic and cardiovascular health by reducing sitting by 50 minutes a day over three months, through practices as simple as standing during a phone call or taking the stairs instead of the elevator.

After three months, the group that decreased their sitting time had “significant” signs of improved metabolic and heart health, when compared to three months prior, including better fasting insulin and resting heart rate. They also had a modest decrease in body fat percentage of one percent, but no changes to BMI or overall weight.

In a recent review of 12 studies published in the journal BioMedical Engineering Online,scientists found that people with anxiety, depression, and panic disorders are more likely to experience poor heart health, regardless of their age.

But poor heart health is not an inevitability for those experiencing mental health issues. Instead, these results reinforce the importance of “early therapeutic intervention” for these brain conditions, the study authors write.

Beyond therapy, maintaining one’s general health is also critical, co-author Renly Lim tells me. Lim is a research fellow at the University of South Australia. This includes maintaining a healthy diet, exercising, and getting enough sleep.

“Talk to your health professional to discuss your options — both non-medication and medication treatments, as well as lifestyle changes — to better manage any mental health problems,” Lim says.

Should you exercise your dog on a treadmill? Here’s what veterinarians say

Dog owners on TikTok have likely already stumbled across a video of a pooch confidently strutting on a treadmill like a model jetting down a runway.

The search phrase “dog walker treadmill” has amassed more than 1 billion views on the site. But is it actually safe or acceptable to walk your dog on a treadmill? Apparently, it’s not an outlandish idea — plenty of pet owners can and do use treadmills to help their dogs exercise. Animal science researchers and veterinarians suggest there can be benefits to exercising pets on a treadmill, though it depends on the needs of your cat or dog.

“While the concept has gained popularity, training a pet to use a treadmill has been around for years,” Stephanie Liff, a veterinarian at Lemonade, which offers pet insurance, tells Inverse.

Here’s how to safely train your pet to walk on a treadmill — and why it might benefit your K9 friend.

Know what to do.

After a three-year hiatus, the Large Hadron Collider is coming back online for new science. This includes the hunt for a fifth fundamental force.

Sam Harper has been a particle physicist and a collaborator on the LHC’s CMS (Compact Muon Solenoid) experiment since 2007. He says that new upgrades at the collider over the past three years are now poised to hopefully bring scientists to the brink of discovering revelations that could alter our understanding of the smallest parts of our universe forever.

Harper says that the scientists use the LHC to explore the validity of particle physics' most important theory: the Standard Model. Since its development in the 1970s, this theory has described nearly all the behavior of subatomic particles that scientists have observed, but recent findings have thrown this supremacy into question, including a 2022 finding from FermiLab data which suggests a certain boson, called the W boson, may be much heavier than predicted by the standard model.

With new upgrades at the LHC, scientists may finally be able to get to the bottom of this mystery, Harper says. If data from LHC’s new run, Run 3, observes behavior not predicted by the Standard Model, that could be a tell-tale sign that there are forces or particles not yet known to the Standard Model.

More like this
Mind and Body
Feb. 6, 2023
Overthinking? This New Kind of Therapy May Finally Provide An Antidote
By Elana Spivack
Science
Jan. 28, 2023
How does the placebo effect take hold? A doctor explains two influential factors
By Kathryn T. Hall. and The Reader
Mind and Body
16 hours ago
Researchers find similar brain pattern shifts in two common conditions
By Miriam Fauzia
LEARN SOMETHING NEW EVERY DAY.
Related Tags
Share: