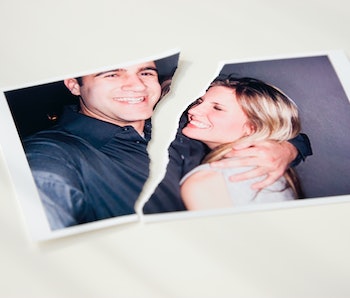 Breakups are a fundamental part of the human experience, but heartbreak is never routine. The last chapter of a romantic relationship is often plagued by questions — What changed? Who changed? — and some serious soul-searching and rumination. Breakups shake up a person's world so much, new research suggests, you might be in the process of ending things without even realizing.

In a study published Monday in the journal Proceedings of the National Academy of Sciences, researchers show how impending breakups can be identified up to three months before they actually occur. The team discovered this shift by taking a close look at Redditors' posts to Reddit’s r/BreakUps — a forum for anonymous discussion of failed relationships — before and after they shared their own story to the forum.

The findings suggest people are affected by a future breakup before they’re even aware a breakup is on the cards. Language markers used to detect impending breakups, in turn, lasted up to six months after the event.

Sarah Seraj is a research assistant at the University of Texas at Austin and the lead author on the study. She tells Inverse the effect of a breakup goes far beyond the romantic realm.

“These changes were detectable even when people weren’t directly talking about their relationship, showing the impact breakups have on all aspects of their life,” Seraj says.

“Changes in people’s language even before the actual breakup means that even though they didn’t necessarily know the end of the relationship was coming, it was already affecting their life," she says.

How breakups unfold — Breakups, Seraj explains, are difficult to study in a natural setting. Researchers typically use retrospective self-reports to work out what went down — and if you've ever listened to a friend recount their own breakup story, you will know these retellings may not be as reliable or as objective as science demands.

“We can track people over time and ask them to fill out surveys, but we can’t exactly follow them around in their personal life and record conversations with friends and family about their breakups,” Seraj says.

Instead, Seraj and her team turned to as objective a measure as they could: natural language data. At first glance, these data look like a social media post or a text chat with friends. Through the eyes of a scientist, they offer a record of subtle changes in psychological states. The computational analysis of natural language, Seraj explains, is a fairly new tool — but critical. Computers can detect small changes a person cannot — like how pronouns and prepositions play into psychology.

Bring in the Redditors— To gather natural language data, the team turned to Reddit. Ultimately, they analyzed more than 1 million posts from 6,800 Reddit users gathered one year before and one year after they shared news about their breakups on the subreddit r/BreakUps.

What makes Reddit fruitful for this kind of study, Seraj explains, is you can track a person's conversations across different areas of their life based on the subreddits they engage with. Once a user was identified as going through a breakup — because of their post on r/BreakUps — the team could track how they discussed other topics both before and after the event, and observe if changes in language use carried over into these other conversations. To be included in the data set, users were required to have at least five posts on Reddit, at least one post on a subreddit other than r/BreakUps, and to have posted at least one month before and after their own breakup.

“One of the other neat things about Reddit is that people post about their life using anonymous user handles,” Seraj says.

“This not only allows them to talk about deeply personal topics without fear of it getting back to their personal lives, but it also protects their identity.”

What was discovered — Language markers of impending breakups were evident up to three months before the event, peaked on the week of the breakup, and returned to baseline about six months later, according to the study.

Language markers include increased usage of the words "I" and "we," and what the researchers call “cognitive processing” words.

Cognitive processing refers to how a person makes sense of or reacts to an event. In the context of this study, an example would be when people tried to figure out why their relationship ended, and understand their role.

In this example from the study, the bolded words are signs of cognitive processing:

"I'm undecided whether or not to share my story. I need some help because I feel lost but my story is long and not sure whether it's worth sharing."

The changes in language observed in the pre-breakup phase suggest disruptions to typical thinking patterns happen before the breakups themselves occur.

“The reason cognitive processing words were high even before the breakup is because relationships rarely go south overnight,” Seraj says.

The big takeaway — This study is the first to track how long breakups affect emotional states by analyzing language data. On average, it took users about nine months to return to their baseline.

Ultimately, people who posted about their breakups for longer time periods had the hardest time getting over it, and took the longest to move on.

This makes sense in some ways, but not others. Studies do suggest “expressive writing” can modestly improve mental health in times of woe. But rumination can be detrimental to the psyche. Writing about the same events repeatedly, the study team theorizes, can cause individuals to consistently relive distressing events, ultimately postponing their recovery.

“People who kept talking about their breakups for longer periods were less adjusted than people who sought support initially but then moved on,” Seraj says.

Over the course of the study, Seraj and her colleagues “read so many heartbreaking stories about breakups.”

There is a silver lining for the suddenly single, however: Those who are coping with romantic loss are very much not alone, Seraj says.

“It will be a struggle at first, but things will get better,” she says. “For most people in our study, it took about six months for things to get back to normal. It’s longer than you think!”

Abstract: By analyzing language on the social media platform Reddit, we tracked people’s social, cognitive, and emotional lives as they dealt with the breakup of a close intimate relationship. Language markers can detect impending relationship breakups up to 3 mo before they occur, with continued psychological aftereffects lasting 6 mo after the breakup. Because the language shifts are also apparent in subreddits (forums) unrelated to relationships, the research points to the pervasive impact personal upheavals have across people’s social worlds. Comparable cognitive and social effects are apparent among people undergoing divorce or dealing with major life secrets. The analysis of subtle shifts in pronouns, articles, and other almost-invisible words can reveal the psychological effects of life experiences.