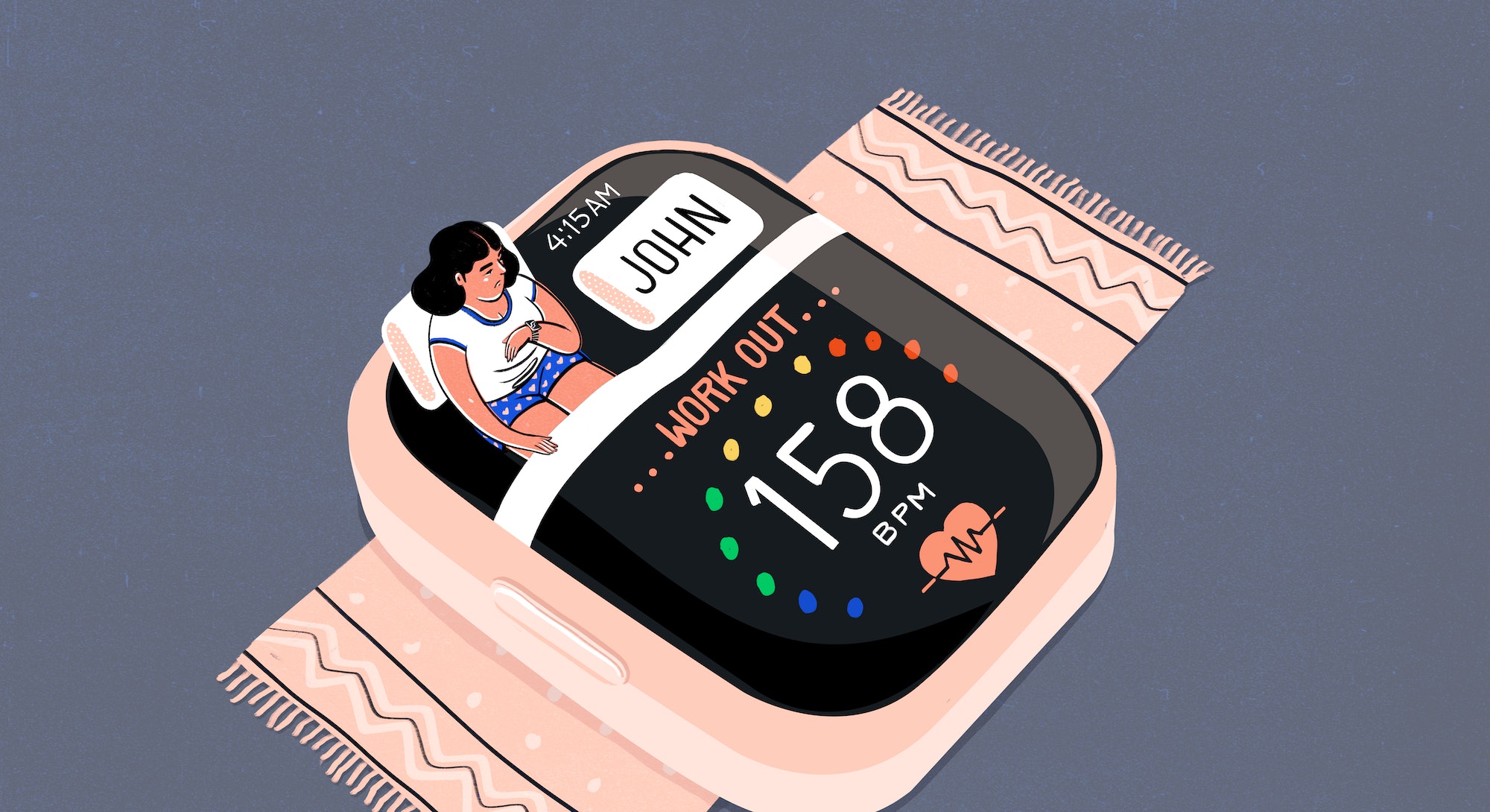 Remember when wearable devices could only track your 10,000 steps a day goal and little else?

Now wearables can track your location, stress levels, blood oxygen levels, heart rate, and much more. Smartwatches can even do all this while taking calls and receiving texts.

But it’s an unintended consequence of wearable devices that could prove to be the most interesting – their effect on relationships. Users have been sharing stories of wearables driving both positive and negative discoveries in intimate relationships via social media. Experts also report that this same technology could one day advance to prevent conflict between couples — or even tell you how connected you are to your significant other.

As wearable technology advances in scope, demand has risen. Statistics show the number of connected wearable devices on the market globally has doubled from 325 million in 2016 to 722 million in 2019. More than 81.7 million adults in the United States now own one.

Technology brands want people to buy their wearables and use them regularly. One way users are motivated to strap their smartwatch on day after day (and not leave it in a drawer) is with competitive elements. Research suggests that social competition can motivate people to work out more — that’s why major wearable brands, including Fitbit, Apple, and Garmin, make wearables that track your data and make it easy to share that data.

But choosing to share data about your workouts can have some unintended consequences if you forget that you’re constantly sharing — something that NFL Network reporter Jane Slater discovered. On December 5, 2019 she tweeted:

Slater confirmed in later tweets her ex was cheating on her — not taking a late-night exercise class. Other users responded to Slater’s tweet with similar stories of their own — suggesting that exposing infidelity with wearable tech data isn’t the obscure occurrence one might think it is.

Why wearables can track sex

Dr. Alex Koch, a professor of exercise science at Lenoir-Rhyne University, confirms that it’s possible for a Fitbit to track sex.

“[Wearables] work by using two built-in devices: an accelerometer, which estimates whole-body motion from device’s vibration, and a photoplethysmograph, which measures heart rate,” Koch tells Inverse. “Sexual activity would show up as some form of activity, through both an increase in heart rate and an increase in motion.”

“The software in the devices does its best guess interpreting vibrations on the device itself to the movement of the whole body.”

The problem is — there’s no way of differentiating sex from other exercises.

“There are many possibilities for erroneous interpretation of sexual activity,” Koch says. “Anything that shakes the watch and raises your heart rate will be detected and interpreted to the best ability of the software.”

Slater isn’t the first to realize the complicated relationship between Fitbits and sex. Back in 2011, users discovered that their Fitbit data was being shared publicly online — including sexual activity they intentionally logged but assumed would be kept private.

This was soon rectified — but when a device is designed to be worn 24/7 and is packed with sensors that can pick up on any movement, the very nature of these machines means unexpected discoveries will happen — the unexpectedly good and the unexpectedly not-so-good.

Anna Kate* told Inverse that a few years ago her (now ex) boyfriend was at a party and, because his ex was going to be there, she asked him to tell her when he was heading home.

“He had originally planned to leave the party around 1 am at the latest, so when I hadn't heard from him at 4 am, I started to call him repeatedly,” Anna Kate says.

That’s when his wearable gave him away — not because Anna Kate had access to his data, but because his smartwatch answered her call.

“I hypothesize that he was probably trying to decline my calls but accidentally picked up via his Apple Watch instead without realizing. That's when I heard a female voice, heavy breathing, and completely lost my mind,” Anna Kate says.

It’s not unheard of to answer a phone in a compromising situation. But the Apple Watch is, by design, meant to be worn all the time and operated with simple taps and gestures.

There are cases in which wearables have a positive effect on relationships, too. David Trinidad, a 38-year-old who works in sales, noticed his wife’s Fitbit was reporting her heart rate was elevated.

“When I looked at the readings it was odd; the resting heart rate was significantly higher than it usually was, and she had spikes throughout the day,” he tells Inverse.

He then went onto a Reddit Fitbit community to find out what was wrong, thinking the tracker was broken.

“I called her right away and said 'someone on Reddit thinks you might be pregnant and that’s why you’re seeing the elevation in heart rate,'” Trinidad recalls. “So that night she bought, like, every test you could buy, and sure enough, she was!”

How wearables can serve future couples

Ongoing research suggests that, in the future, sharing wearable data can benefit couples by providing a framework for how to avoid conflicts and connect.

Dr. Adela C. Timmons, an assistant professor in clinical and quantitative psychology at Florida International University, has been working on ways to use wearable technology to prevent conflict in relationships before it happens.

“Wearable tech could potentially be used one day to understand how emotional states contribute to relationship functioning,” Timmons tells Inverse. “For example, wearables could warn or alert us to stress or negative mood states in ourselves and direct us to calm down.” In turn, wearables could prompt couples to meditate or take a break.

This use is a possibility because data like vocal pitch and tone, word usage, electrodermal activity, and heart rate are all useful predictors for these emotions. But while this could be a positive application of wearable technology, it’s still a ways off.

“More research needs to be done to understand how such technologies might help versus hurt relationships and how exactly we should structure, present, and share information that appropriately respects privacy and autonomy,” Timmons explains. She estimates that another six or seven years of research development would be needed before we can roll these kinds of interventions out more widely.

That’s not to say that this data can’t be used to evaluate how someone feels presently. Interestingly, this same kind of data can already show how connected we are to someone else. A 2013 study published in the International Journal of Psychophysiology found that people in love have similar heart rate rhythms. There isn’t a feature yet to make these kinds of comparisons in consumer wearables — but the finding suggests that one day we might see a "how in love are you?" feature.

According to Statista, the number of wearable devices is predicted to reach 1 billion globally by 2022. In the coming years, they may evolve to become skin patches or swallowable sensors so they’d be capable of collecting even more advanced data. The fact that processors and sensors will become more sophisticated, lighter, and smaller suggests that “the sky is the limit,” says Koch.

Could more advanced tech and data spell more problems for relationships? Maybe. But let’s not forget that technology doesn’t cause breakups, conflict, and cheating — people do.

There may have been a paradigm shift in the way that technology can expose cheating and other breaches of trust — especially if data, passwords, and accounts have been shared beforehand — but although the technology is new, the situations are not.

In the past, infidelity might have been exposed by a receipt for dinner in a coat pocket or lipstick on a collar. Now it’s heart rate data or an accidental hand gesture on a touchscreen. It’s the same story, but it’s set in modern times.

“It's made me re-evaluate the power technology has to make or break relationships,” Anna Kate says. “It can help connect people who are thousands of miles away, and it can leave a trail of irrefutable evidence if something goes wrong.”

“I think it's all up to the person wielding the technology and how they want to use it — for good or for the not so good.”