"These findings are invaluable for the health of millions of people." 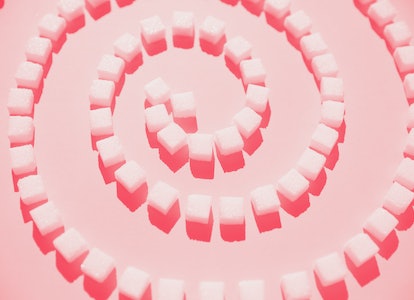 In the world of food, few substances get quite as bad wrap as sugar. It's a fair evaluation: too much of the sweet stuff is linked to a myriad of negative health effects like fatty liver disease, Type 2 diabetes, cardiovascular disease, and some cancers.

In a study published Wednesday in the journal Science Translational Medicine, scientists announced another insidious sugar side effect. Research suggests sugar consumption can disrupt the gut microbiome, make animals vulnerable to colon inflammation, and may lead to inflammatory bowel diseases like Crohn's disease.

The research was conducted in mice, so how these inflammatory dynamics play out in real-life human bodies remains to be seen. But for now, scientists and physicians alike say it's wise to reserve sweeteners as a special treat, not a daily staple of your diet.

"These findings are invaluable for the health of millions of people because high-sugar diets are an integral part of our modern lifestyle," study co-author, Hasan Zaki, tells Inverse. Zaki is a researcher at the University of Texas Southwestern Medical Center.

"Our study suggests that avoiding high-sugar diet is an option for the prevention of IBD and other inflammatory and metabolic diseases."

Sweet science— The average American eats about 77 grams of sugar daily, a number that dwarfs the recommended amount of 25 to 36 daily grams for men and women, respectively.

For decades, scientists have known that sugar can throw metabolism and insulin responses out of whack, a shift that can cause a cascade of downstream effects. What they didn't know, however, is how sugar influences inflammatory bowel diseases (IBDs).

To determine how sugar influences IBDs, the research team studied the effects of different types of sugars — glucose, sucrose, and fructose — on mice's inflammatory responses and gut microbiota.

"We clearly demonstrate that a high-sugar diet alters the composition of gut microbiota."

They fed groups of mice solutions that were 90 percent water and then 10 percent either glucose, sucrose, or fructose for a week. The dose of sugar was designed to mimic the 15 percent sugar content of common soft drinks.

Another group of mice drank high sugar solutions for one to five weeks, then DSS. The sugar groups were compared to a group of healthy mice that were not fed any extra sugar but also given DSS. After these initial experiments, researchers also transferred the gut microbiota of sugar-fed mice into healthy mice. Gut microbiota consists of microorganisms that live in the digestive tracts of animals.

Why is sugar not good for health?

Mice on the sugar treatment suffered from aggressive colon inflammation with severe diarrhea and a rapid loss of nearly 20 percent of their body weight. The gut microbiota of sugar-fed mice induced exacerbated colitis when transferred into healthy mice.

Short-term intake of large amounts of sugar didn't trigger severe acute inflammatory responses in mice with healthy guts. Instead, consuming sugar markedly altered the composition of the gut microbiome, the "good bacteria" in the gut that keeps the digestive system and metabolism operating smoothly.

Specifically, sugar had this negative microbiome effect by feeding one bacterial species named Akkermansia muciniphila. It degrades mucus and has been linked to colon inflammation.

This gut bacterial shift eroded the protective layer of mucus that lines the inside of the mouse intestines, which allowed other bacteria to infiltrate the gut lining. Via this mechanism, the high sugar intake made mice more susceptible to colon inflammation, a change that could put them at greater risk for inflammatory bowel diseases.

"We clearly demonstrate that a high-sugar diet alters the composition of gut microbiota, favoring the growth of several bacteria that degrade the mucus layer of the intestine," Zaki explains.

"The mucus layer protects the intestinal mucosal tissue from pathogens. Thus, intestine with reduced mucus layer gets easily exposed to commensal or pathogen, leading to the induction of inflammatory responses in the gut and development of inflammatory bowel disease."

These findings may explain why inflammatory bowel diseases are prevalent in Western countries, and their increasing incidence among younger generations, the authors say.

"Inflammatory bowel disease (IBD) is not an ancient but a contemporary disease that is rapidly increasing likely because of widespread adoption of a Western lifestyle and diet," Zaki and their co-authors write.

"Our findings strongly support the concept that intake of high sugar in the form of sucrose and high fructose corn syrup might be a critical trigger for IBD."

Quitting sugar — Based on these findings, as well as the growing body of evidence underscoring sugar's nasty effects, scientists suggest limiting sugar intake.

"These and other findings clearly establish a detrimental role for sugar in the gut," Zaki explains. "Although we have to verify our findings in clinical settings, it is highly likely that the effect of high-sugar will be the same for the human gut."

While cutting out sugar may seem simple at the outset — just skip dessert, right?— it's a lot more complicated than it sounds. Sugar is in most processed foods, whether they be chicken nuggets or ketchup. A 2015 survey published in The Lancet found that 68 percent of all packaged foods and beverages in the United States food supply contain “caloric sweeteners” — another way of saying sugar.

To cut down on sugar, health providers suggest:

Ample research also shows that whole, plant-based foods offer the most nutritional bang for their buck.

"The findings of this study underscore that we really need to pay attention to how much sugar we take daily," Zaki says.

"We cannot completely avoid sugar in our diet because sugar is essential for our energy and metabolism, but we can stop excessive intake of sweetened food and beverages."

Abstract: The higher prevalence of inflammatory bowel disease (IBD) in Western countries points to Western diet as a possible IBD risk factor. High sugar, which is linked to many noncommunicable diseases, is a hallmark of the Western diet, but its role in IBD remains unknown. Here, we studied the effects of simple sugars such as glucose and fructose on colitis pathogenesis in wild-type and Il10−/− mice. Wild-type mice fed 10% glucose in drinking water or high-glucose diet developed severe colitis induced by dextran sulfate sodium. High-glucose–fed Il10−/− mice also developed a worsened colitis compared to glucose-untreated Il10−/− mice. Short-term intake of high glucose or fructose did not trigger inflammatory responses in healthy gut but markedly altered gut microbiota composition. In particular, the abundance of the mucus-degrading bacteria Akkermansia muciniphila and Bacteroides fragilis was increased. Consistently, bacteria-derived mucolytic enzymes were enriched leading to erosion of the colonic mucus layer of sugar-fed wild-type and Il10−/− mice. Sugar-induced exacerbation of colitis was not observed when mice were treated with antibiotics or maintained in a germ-free environment, suggesting that altered microbiota played a critical role in sugar-induced colitis pathogenesis. Furthermore, germ-free mice colonized with microbiota from sugar-treated mice showed increased colitis susceptibility. Together, these data suggest that intake of simple sugars predisposes to colitis and enhances its pathogenesis via modulation of gut microbiota in mice.