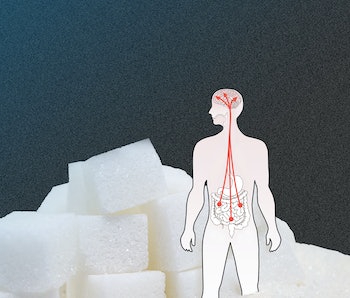 Every animal on the planet has a hardwired preference for sugar. But unlike other species, human beings have refined sugar — and have hidden it in a wide array of foods, from soda to pasta sauce. Sugar is the most common food ingredient in processed foods, and some clinicians argue, we're all addicted to it.

Why we want sugar so terribly is explained by a study published Wednesday in the journal Nature. The reasons why go far beyond taste, scientists say, and involve a part of the body far beyond the mouth.

In a study on mice, researchers discovered a gut-brain axis that may explain sugar cravings. This powerful neural circuit runs between the gut and brain, relaying sugar-related information. It is activated even when taste receptors are inhibited, the study reports.

This finding explains the fundamental ways sugar affects and interacts with the brain — and explains why sugar triggers an "unquenchable desire to consume it," senior author Charles Zuker, a neuroscientist at Columbia University’s Zuckerman Institute, tells Inverse.

Scientists have known sugar influences the brain's reward system, and this process starts with taste. What they didn't know — and what this study reveals — is that there's a separate neurological pathway that starts in the gut and is activated by sugar. This pathway, Zuker explains, send signals "directly into your brain."

When humans and animals taste a sugary substance, taste receptors on the tongue send hardwired signals to the brain. Sugar, also known as glucose, sets off a flurry of metabolic activity, which converts the glucose into energy.

Previously, it was thought that taste alone drove our desire to consume sugar, Zuker explains. But even when taste receptors are "turned off," animals still seek out sugar — a strange phenomenon that's been seen in previous studies.

In an effort to illuminate the factors driving sugar cravings beyond taste, Zuker and his team put mice through a series of experiments. The team tested what happened when they bypassed the mouse taste receptors and delivered glucose directly to their gut.

Even when taste receptors were inhibited, a certain region of the mouse brains called the caudal nucleus of the solitary tract (or cNST) "lit up" when sugar hit the gut. This suggested that signals were traveling directly between the gut and brain.

To determine the signals' path, the researchers honed in on the vagus nerve, the body's longest cranial nerve that connects the brain to internal organs.

Through functional imaging, the team captured neural activity in the vagus nerve activated by sugar in the gut. They became the first scientists to observe sugar-specific neurons firing along a direct circuit from the gut to the brain.

When the scientists turned off this gut-brain circuit, the mice no longer craved or showed a preference for sugar.

Zuker says that this finding explains why "sugar is mediating this very strong effect on our neural circuits that are at the root of many of the problems associated with sugar overconsumption."

The team also found that artificial sweeteners — which promise the taste and satisfaction of sugar without potentially harmful costs — did not activate this gut-brain sugar sensor. That's likely why these sugar substitutes fail to impersonate sugar or assuage cravings.

"When we drink diet soda or use sweetener in coffee, it may taste similar but our brains can tell the difference," Hwei-Ee Tan, a co-author of the study and researcher at Columbia's Zuckerman Institute, said in a statement.

"The discovery of this specialized gut-brain circuit that responds to sugar -- and sugar alone -- could pave the way for sweeteners that don't just trick our tongue but also our brain."

In the future, manipulating the gut-brain sugar sensor could help people enjoy — and be satisfied by— sweet substances, without the risk of sugar driving poor health.

Abstract: The taste of sugar is one of the most basic sensory percepts for humans and other animals. Animals can develop a strong preference for sugar even if they lack sweet taste receptors, indicating a mechanism independent of taste . Here we examined the neural basis for sugar preference and demonstrate that a population of neurons in the vagal ganglia and brainstem are activated via the gut–brain axis to create preference for sugar. These neurons are stimulated in response to sugar but not artificial sweeteners, and are activated by direct delivery of sugar to the gut. Using functional imaging we monitored activity of the gut–brain axis, and identified the vagal neurons activated by intestinal delivery of glucose. Next, we engineered mice in which synaptic activity in this gut-to-brain circuit was genetically silenced, and prevented the development of behavioural preference for sugar. Moreover, we show that co-opting this circuit by chemogenetic activation can create preferences to otherwise less-preferred stimuli. Together, these findings reveal a gut-to-brain post-ingestive sugar-sensing pathway critical for the development of sugar preference. In addition, they explain the neural basis for differences in the behavioural effects of sweeteners versus sugar, and uncover an essential circuit underlying the highly appetitive effects of sugar.