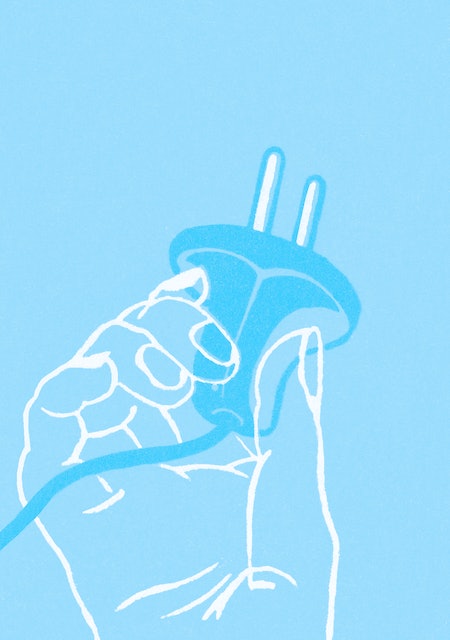 The past few months have been just pummeled with bad news: Disastrous wildfires in Australia, a novel coronavirus pandemic, and police violence over racism, and its various ripple effects.

Social media has been a grimly kept log of all it all, in real-time. If you have the means, then you have non-stop access to the powerful, the violent, the overwhelming. All you have to do is scroll through your newsfeed.

It can lead to "feed fatigue," and the cracks are beginning to show.

There’s compassion fatigue, a condition sometimes experienced by first-responders who feel disconnected from the suffering of others after exposure to tragedy.

There's also apocalypse fatigue, a term used by climate changed activists to describe when otherwise well-intentioned people, overwhelmed by the threats of the climate crisis, begin to avoid conversations and stop seeking solutions.

With the global pandemic unfolding amidst a backdrop of police violence against Black Americans, “feed fatigue” has also reemerged.

When crises become overwhelming on social media, the typical advice is to log off. But when faced with the crisis of police violence and racism, turning away isn’t an option for Black Americans.

There’s also the argument that disengaging can actually cause harm, a message that resonates: A popular Instagram post offering advice for people wishing their feed would “go back to normal" has been widely shared on Twitter, and has almost 300,000 likes on Instagram.

Brandale Mills Cox is a market researcher who studies diversity in media. She tells Inverse that there are ways that social media can help push a movement forward, like tweeting at your Congressperson or advocating for changes in legislation on Instagram.

It can even be an important method of reflection on tragedy. A 2017 study of 28 million Twitter posts about the Black Lives Matter movement found that continued engagement on Twitter was linked to lowered negativity and anger, as well as the emergence of a “collective identity.” But social media isn’t enough on its own, Mills Cox tells Inverse.

“I think that our white allies might feel a sense of obligation to post certain things," she says. "That's great but we want more than that. We want actual dialogue."

Social media is just one way of opening up that dialogue, experts tell Inverse. Fighting “feed fatigue” doesn’t necessarily mean staying glued to Twitter. Rather, it means committing to acknowledging the experiences of Black Americans, explains Joseph Flynn, an associate professor at Northern Illinois University who studies the intersection of multicultural and social justice education.

“It's not so much that people shut down so much as whether or not they are willing to start back up and stay on the path,” Flynn tells Inverse. “Continue to educate oneself and continue to reach out and create new relationships across racial and ethnic lines.”

Feed fatigue and “white fatigue” – There's a difference between wanting to unplug because of triggering content, and wanting to avoid having to confront privilege.

“We know that watching negatively valenced news can affect everyone’s mood, making them sad or anxious depending on the nature of that news,” Graham Davey, a professor emeritus of psychology at the University of Sussex, tells Inverse. In some cases it can cause symptoms “very similar to post-traumatic stress disorder," Davey explains.

The closer you are to that violent or negative news, the worse the effects are. Black men are 2.5 times more likely to be killed by police than white men are, according to a 2019 study published in Proceedings of the National Academy of Sciences. That means, seeing a timeline that’s filled with videos of police violence may be especially harmful to Black Americans.

“The more the viewer feels threatened by the visual images they see — if, for example, the images resonate with what is happening in their lives — the more likely they are to experience stress-related responses,” says Davey.

For people who are triggered by seeing violence in a social media feed, Mills Cox suggests reevaluating who you’re following, limiting how much time per day you spend on social media, and making sure that people in your feed aren’t simply regurgitating violence purposely.

Unplugging, in that sense, is extremely healthy. “Especially in times like this we're dealing with a pandemic on top of racial and social injustices. It can be a lot and it can be really overwhelming,” she says.

Things get more complicated when the urge to detox from social media stems from being made to feel uncomfortable by ideas that question the status quo and draw attention to white privilege.

The urge to detox from that is sometimes called “feed fatigue” on Twitter but it’s somewhat similar to the concept of “white fatigue,” which Flynn outlines in detail in his book White Fatigue: Rethinking Resistance for Social Justice. White fatigue, he explains, is a “quasi-form of white resistance” in which white people who believe racism is wrong still struggle to grasp the idea of systemic or institutional racism.

“When issues of race come up you can see this palpable: ‘here we go again,’” says Flynn. “Understanding institutional racism is far more complex of an endeavor. White folks have a tendency to get frustrated with that process.”

That frustration can increase when coupled with the pace of social media.

On one hand, he explains, you might see posts that outline how racism exists in a certain person’s behaviors or actions. Then, immediately below, you see posts describing the legacy of institutional racism in America. You might have posted a black square on Backout Tuesday without thinking twice, only to learn, in a matter of hours, that it may have even caused harm.

“It’s this oscillation between one perspective and another perspective. I think that confusion adds to the notion of fatigue. People end up resigning saying, these things are too difficult, how can we ever resolve these issues,” Flynn says.

Ultimately the road to better understanding is “rife with potholes and missteps and misunderstandings,” Flynn explains. The desire to unplug from challenging or complex ideas is “kind of natural.” It’s also uncomfortable.

But unplugging from social media and unplugging from the conversation about the injustices don’t have to be the same thing. There are ways to engage offline that can continue to push boundaries.

How to strike a balance — If you’re feeling exhausted from social media but also want to say on course, Mills Cox and Flynn both argue that social media isn’t the only place you can engage with new viewpoints or take action.

“It becomes really important that you get outside of social media and sit face to face with someone and have a conversation,” Flynn says. “That makes it much easier to leave yourself open to understanding this broader scope of history, and institutional and systemic behavior that shapes the environment for all of us."

“Unplugging” also doesn’t mean you have to sign off entirely — it just comes down to managing how much time you’re devoting to it. Davey recommends setting aside a particular time each day when you are going to go online, limiting how much time you spend there, and following up your online time with a relaxing activity like listening to music.

Still, in some cases, “shutting down [social media] is sometimes the best thing you can do,” says Flynn. What’s more important is that you decide to keep logging back on, or participating in the dialogue over and over again.