"It's a public health problem." 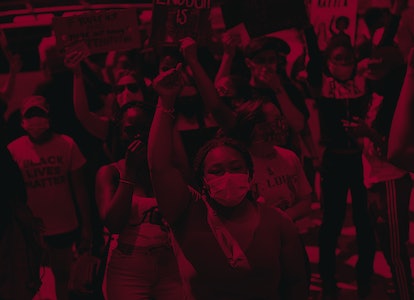 As protests continue across the United States in response to the killings of Black Americans by police, would-be protesters are confronted with a question: Do they head to the streets or do they continue to socially distance as the Covid-19 pandemic continues?

On Twitter, some health specialists aired their take: Covid-19 is a public health emergency, and so is racism. Because of that, they support people's choice to go protest, even during a pandemic. They just hope that protesters do so safely.

Wizdom Powell, a psychology professor at the University of Connecticut who has studied population health disparities, puts it this way: "There is substantial evidence to suggest and to affirm that racism is a public health problem," Powell tells Inverse.

Covid-19 and the deaths of George Floyd, Breonna Taylor, Ahmaud Arbery and others have brought this idea into the "mainstream understanding," Powell explains. But the idea that racism is a public health issue is not a new idea.

Covid-19 is a stark reminder of this inequity: Emerging data suggest Covid-19 is killing Black Americans at 2.4 times the rate of white Americans. When they do seek care, Black Americans are more likely to experience lower-quality care at hospitals and face implicit bias from their medical provider.

Racism's mental toll — When experiencing racism, like harassment on the street or discrimination from an employer, the brain triggers its evolutionarily embedded stress response: fight or flight.

The heart pounds, breath quickens, and senses heighten to prepare the body to run or face a threat. But when threats pop up every day, they over-activate this physiological response. In turn, this creates chronic stress that, over time, takes a life-altering toll.

About 66 percent of Black people report high levels of day-to-day racial discrimination, which can trigger the fight or flight response. These frequent, potentially traumatic events influence a person's "allostatic load," research shows. This is a physiological indication of repeated or chronic stress's wear and tear on the body.

Black women and men have higher allostatic loads than their white counterparts, which contributes to early health deterioration and shorter lifespans. Researchers call this disturbing health phenomenon "weathering," the result of cumulative exposure to social and economic adversity and political marginalization.

It's not just direct experiences of racism that influence health. Emerging research suggests trauma can be passed inadvertently from generation to generation. That means centuries of past trauma from enslavement and legalized oppression linger in the psychological and physical health of people of color today.

“Sick and tired” — Living as a Black person in a racist society doesn’t just cause psychological damage. It can accelerate biological aging. It can also contribute to a long list of negative health outcomes including higher rates of diabetes, hypertension, asthma, and heart disease compared to white individuals.

These health disparities aren’t inherent in the biology or genetic makeup of Black people, Powell stresses. Instead, they stem from environmental factors like exposure to pollution, limited access to healthy food, low-quality medical care or insurance coverage, and development of “risky” coping mechanisms, like substance use.

"These are the byproducts of the limited availability of resources in the places where people live, work, play, pray, get educated, and get health care," Powell says. "It is about the structural arrangements that Black folks overwhelmingly find themselves in that contributes to these outcomes."

In a 2017 study, researchers found Black men who experienced stronger implicit anti-Black bias and reported higher levels of racial discrimination had the shortest leukocyte telomere lengths (LTL). Telomeres are repetitive sequences of DNA at the ends of chromosomes that protect against DNA degradation. They're also markers of aging on the cellular level.

"The consequences of experiencing racism build up in the body in a way that can overwhelm your systems."

Another 2010 study found that, at the ages of 49 to 55, Black women are 7.5 years biologically “older” than white women. Indicators of perceived stress and poverty account for 27 percent of this difference.

"The consequences of experiencing racism build up in the body in a way that can overwhelm your systems — your immunological functioning, your cardiovascular functioning, and perhaps, your endocrine functioning," Powell says. "The impacts are bone-deep, not skin deep."

Timothy Lahey, an infectious disease physician and clinical ethicist at the University of Vermont, says there are so many examples of disparate health outcomes and inequitable access to health care for people of color that "it takes hours to even list them."

"Nearly all relate to social determinants of health rather than genetics," Lahey tells Inverse, noting barriers to health such as lack of preventive care like vaccines, limited access to health insurance, and under-recognition of pain and other symptoms while in care.

"This all adds up to people of color having higher risks of disease due to factors beyond their control, exacerbated by lower access to needed care, feeling less heard in care; receiving lower-quality care in care," he explains. This results in "having poorer health outcomes."

How to build an equitable public health system — One goal of public health is to reduce health disparities. Yet public health authorities have been slow to collectively classify racism as a public health crisis or emergency, or respond appropriately, Powell says.

"Covid-19 will both exacerbate social determinants of poor health and point a bright red neon blinking arrow at a problem we, in America, are so predisposed to neglect," Lahey says. "It is thus an opportunity and a call to action to all of us to listen more, to insist on change, and to harness this moment as a time to change our health care systems for the better."

"We have to look at all of our policies and ask ourselves, 'Are these policies fair, just, and equitable?'" Powell says. "We have to collectively address this and when we do, and I believe we can, we will have emerged as a healthier, stronger, and more unified nation."

More like this
Mind and Body
6.27.2022 10:30 AM
What’s the best way to wash your face? Dermatologists explain the science of clean skin
By Katie MacBride
Mind and Body
6.19.2022 2:00 PM
This overlooked mental-health "hack" increases your chance of living longer
By Sarah Sloat
Mind and Body
6.19.2022 11:00 PM
Covid-19 smell loss: 6 long-term effects nobody is talking about
By Johan N. Lundström and The Conversation
Related Tags
Share: