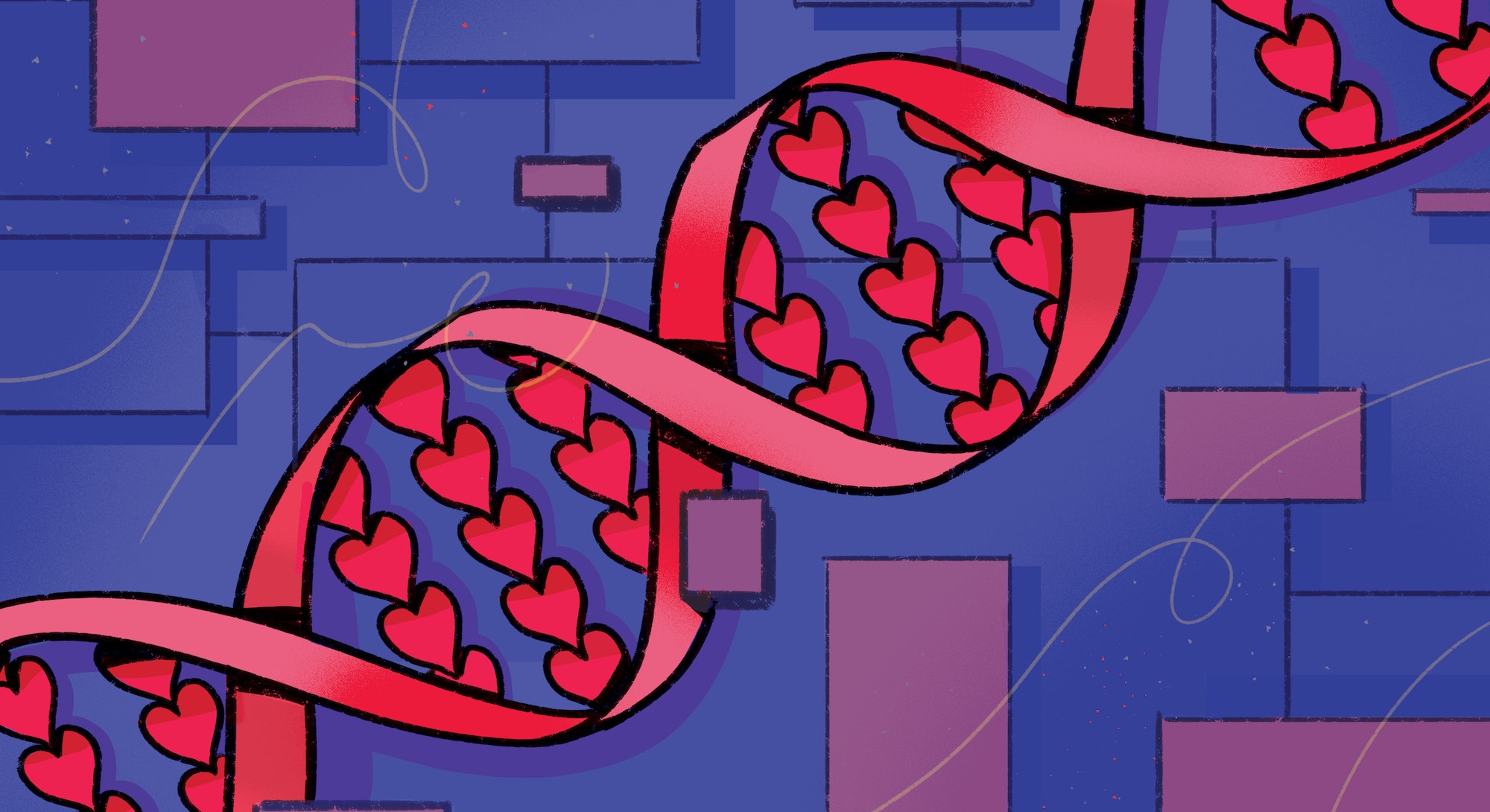 What if you could find your one true love through advanced DNA matching technology?

That’s the dream scenario researcher-turned-business mogul Rebecca Webb promises in Netflix’s romantic sci-fi thriller The One, which tells the story of a dating company called MatchDNA that uses genetics to help customers find their soulmates. The fictional technology is based on the way ants find their community through a pre-established biological bond, which Webb claims can be replicated in humans to find your genetic soulmate.

The science behind The One is fiction — not much is known about what element of choice is involved in ant reproduction — and the series does little to explore the ethical conundrums of a genetically predefined happy ever after. Still, it’s an appealing fantasy and one that researchers all over the world have long tried to solve. While some scientists believe genes can and should be used to match people, others think it’s just poorly researched wishful thinking. One thing both sides do agree on: they still don’t have a final answer.

The genetics of love

Timothy Sexton, CEO of the dating app DNA Romance, tells Inverse The One isn’t that far off from the service he already offers.

“I guess I was happy that The One came out and it was highlighting the fact that DNA-based dating was a real thing,” Sexton says.

DNA Romance uses “information hidden in your DNA to forecast ‘romantic chemistry’ between people online.” Users provide their DNA profile either by uploading data from other DNA services (like 23andme and Ancestry.com) or sending a cheek swab directly to the lab. They also fill out a series of Meyers Briggs personality questionnaires before being matched with a pool of potential lovers.

Our DNA is full of data (3.2 billion nucleotides packed into 23 pairs of chromosomes, to be exact), but Sexton’s company claims to have isolated the specific details that determine if you’re a good romantic match.

“Your DNA file is huge,” he says, “but what we look at is a hundred different DNA markers.”

Specifically, DNA Romance examines the four bases of DNA (As, Ts, Gs, and Cs) in 100 locations on chromosome six. But you’re not looking for direct mirror images. After all, as the saying goes, opposites attract.

The entire endeavor is mainly based on research spurred from the so-called “sweaty T-shirt experiments” in Switzerland in the ‘90s conducted by the evolutionary biologist Claus Wedekind. The experiment — itself based on a mice study conducted in the ‘70s — had male college student participants wear the same T-shirt for multiple days and then asked women to rate the garments according to attractiveness after smelling them.

The results suggested women tended to choose scented T-shirts from men who were most different in certain DNA markers on chromosome six. Those same markers code for the major histocompatibility complex (proteins used in the immune system). MHCs are, according to researchers, possibly detected through scent. They’re what pop culture wrongly refers to as “pheromones.” Actual pheromones are used by animals, not humans, in mate selection.

While there have been some controversies about the Swiss experiment (more on that a bit later), Sexton points out that other independent studies corroborate its findings. That includes a 2006 study by the University of New Mexico, one conducted in 2016 in Germany, another from 2018 specifically examining MHC-based attraction among Asian American speed-daters at the University of California, and one more doing the same between 58 Southern Brazilian students.

“The fact that the same observations and experiments can be compared in different spaces, and in birds, in salmon, in lemur, in horses… that speaks volumes to me,” Sexton says. “I don't argue that it's all chemistry; chemistry is just one little component. But it makes all the sense in the world that we're wired to have chemistry with somebody who is genetically different to us.”

Plus, the genetics of love might not solely be up to MHCs, either.

In other words, “genetics plays a role in the intensity of how people's brains respond to their partner,” Acevedo says.

Her team is among the first to examine this thoroughly. The perfect soulmate match à la The One is “too much of a stretch,” Acevedo says, but given a person’s genetic makeup, there’s a pool of people they're more likely to be attracted to.

“The genes stay the same, but they get turned on and turned off by different things, and certain environments will trigger certain responses,” she says. “Just like people may have a genetic predisposition for diabetes but maybe only trigger that according to their lifestyle, it’s probably the same with love.”

Not all researchers are enthusiastic about playing Cupid with people’s helixes. That includes Matthew Cobb, a professor of zoology at the University of Manchester who specializes in the history of reproduction.

“The idea that humans base their choice of partner on genetic similarity or dissimilarity seems to be absurd and to fly in the face of everyday experience,” Cobb says. “It’s all just a bit crap, to be honest.”

“One of the most remarkable things is that we find people of every kind attractive.”

“While there may very well be some underlying relationships between our genetics and partner compatibility, the reality is we don’t have nearly enough data to understand what they are, and we likely won't for quite some time,” she says. “It’s misleading at best and dangerous at worst to present our understanding of human-human interactions at the genetic level as anything but shaky.”

Part of the scientific community takes issue with the genesis of the sweaty T-shirt theory in the first place. Tristram Wyatt, a professor of zoology at the University of Oxford who has extensively written about how corporations created a human pheromones myth, quickly points out multiple flaws with the experiment.

“Over the years, when people have tried to repeat the experiment, sometimes it works and sometimes it doesn't, and the numbers are very small,” he says. “The low down is, nope, it's not possible, but it's a really interesting idea.”

According to Wyatt, apps like the fictional MatchDNA are “kind of a gimmick” and with little scientific backing.

“One of the most remarkable things about humans is that we find people of every kind attractive,” he says, “and we're always able to have children, which suggests we are enormously compatible the world over.”

Whether or not “the one” exists at all is a debate for another time. According to science, the chances that your soul mate’s identity is hidden solely in your DNA are slim to none, but that doesn’t mean it’s not worth looking.

FUTURE LOVE IS A SERIES ABOUT HOW ADVANCEMENTS IN SCIENCE, TECHNOLOGY, AND CULTURE ARE CHANGING LOVE, SEX, AND DATING.