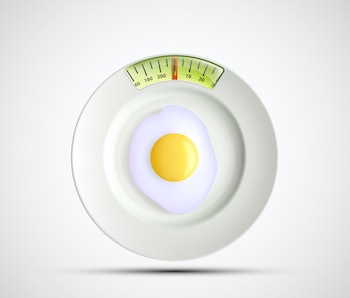 In the ongoing quest to live longer and healthier, some research has focused on the power of calorie restriction — the controlled reduction of nutrient intake while maintaining a balanced diet to avoid malnutrition.

The underlying mechanisms driving the positive link between calorie restriction and longevity have long been elusive. A recent study in mice brings us one step closer to understanding: Researchers pinned down some of the metabolic pathways involved and hint that scientists may be able to hijack these pathways with a potential therapy in the future.

Years down the line, researchers predict people may be able to derive some of calorie restriction's positive benefits — without actually reducing what they eat.

The findings were published Tuesday in the journal Science Signaling.

To determine what's happening on a molecular level when animals restrict their caloric intake, researchers rounded up a group of mice — a common stand-in for humans in clinical research.

The team specifically focused on temperature as a potential driving factor of longevity, as it relates to calorie restriction.

"This is an adaptive mechanism that the organisms evolved to save energy when food is scarce," study co-author Bruno Conti tells Inverse. Conti is a neuroscientist at Scripps University.

"... the ultimate goal is to provide the beneficial effects of calorie restriction without having to undergo either reduction of calorie intake or core body temperature."

To unwind these factors, Conti and his colleagues put mice into two groups, one housed in a cage at a standard room temperature of 71.6 degrees Fahrenheit. The other cage was kept at 86 degrees Fahrenheit, a state scientists call thermoneutrality.

Thermoneutrality is a state of thermal balance between an organism and its environments such that bodily thermoregulatory mechanisms are inactive. Essentially, mice aren't shivering or sweating to regulate their body temperature, and they aren't losing heat.

Researchers restricted half the mice's caloric food intake, gradually reducing their daily diet by until they were eating half their original diet. The other group of mice ate however much they desired.

Throughout the study, scientists analyzed the mice's metabolic activity in their hypothalamus and blood plasma. The hypothalamus is a brain region involved with regulating hunger and feeding, while the plasma is a "good vehicle to evaluate system-wide changes," the team writes.

How does calorie restriction impact metabolism?

Ultimately, these findings suggest that not being in a thermoneutral state can drive the life-extending elements of calorie restriction.

In both the blood plasma and hypothalamus, calorie restriction influenced many metabolic pathways in the 71.6 degrees Fahrenheit group. However, fewer of these changes occurred in the group in the thermoneutral, hotter condition.

Further examination linked the metabolic effects of calorie restriction to the molecules nitric oxide and leucine enkephalin, which were produced in higher amounts in the hypothalami of the mice housed at 22 degrees Celsius.

“By validating the pathways identified, we hope that we will pave the road for the development of calorie restriction mimetics that promote health and longevity,” Conti says.

Conti also aims to specifically identify the pathways regulated by temperature reduction that promote health and longevity. This step is crucial for developing molecules to target them, called temperature mimetics.

"Regardless of the definition, the ultimate goal is to provide the beneficial effects of calorie restriction without having to undergo either reduction of calorie intake or core body temperature," he explains.

The evidence pointing to calorie restriction and another popular dieting approach, intermittent fasting, is growing. However, the evidence so far is largely overshadowed by the long list of studies suggesting eating a Mediterranean diet heavy in fruits and vegetables helps people live longer and delay the onset of disease.

Much more research in people must be completed before scientists are confident that calorie restriction meaningfully impacts human health and lifespan.

"While eating with moderation remains a generally good practice to care for health, I would not recommend trying calorie restriction at home without consulting with a doctor," Conti cautions. "Similarly, I do not recommend trying to reduce body temperature which, if done uncontrollably could have fatal consequences."

Abstract: Calorie restriction (CR) enhances health span (the length of time that an organism remains healthy) and increases longevity across species. In mice, these beneficial effects are partly mediated by the lowering of core body tem- perature that occurs during CR. Conversely, the favorable effects of CR on health span are mitigated by elevating ambient temperature to thermoneutrality (30°C), a condition in which hypothermia is blunted. In this study, we compared the global metabolic response to CR of mice housed at 22°C (the standard housing temperature) or at 30°C and found that thermoneutrality reverted 39 and 78% of total systemic or hypothalamic metabolic variations caused by CR, respectively. Systemic changes included pathways that control fuel use and energy expenditure during CR. Cognitive computing-assisted analysis of these metabolomics results helped to prioritize potential active metabolites that modulated the hypothermic response to CR. Last, we demonstrated with pharmacological ap- proaches that nitric oxide (NO) produced through the citrulline-NO pathway promotes CR-triggered hypothermia and that leucine enkephalin directly controls core body temperature when exogenously injected into the hypo- thalamus. Because thermoneutrality counteracts CR-enhanced health span, the multiple metabolites and pathways altered by thermoneutrality may represent targets for mimicking CR-associated effects.

More like this
Mind and Body
8.7.2022 10:00 AM
Nordic Diet vs. Mediterranean Diet: The health benefits of eating like a Viking, explained
By Duane Mellor, Ekavi Georgousopoulou and The Conversation
Mind and Body
8.3.2022 1:35 PM
Is collagen worth taking? Scientists reveal the ideal method for building the protein
By Katie MacBride
Mind and Body
7.31.2022 2:00 PM
Four science-backed methods to feel less tired during the day
By Sarah Sloat
Related Tags
Share: