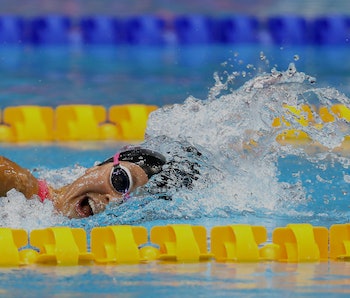 On Sunday, Becca Meyers, a three-time Paralympic gold medalist in swimming, dropped out of the Tokyo Paralympic Games. Her track record made her a clear favorite for another medal.

In a statement released Tuesday, Meyers explains she was forced to drop out because the U.S. Olympic & Paralympic Committee (USOPC) denied a reasonable and essential accommodation.

What’s new — Meyers is a deaf-blind athlete. She had asked that a Personal Care Assistant (PCA) be able to accompany her, a typically standard request for the Paralympic games. In this case, the PCA was someone she knew and trusted and had relied on for this in the past: her mother.

USCOPC deemed Meyers’s PCA “non-essential,” she explains in the statement. Instead, the committee decided only one PCA would accompany all 33 Paralympic athletes on the swim team, nine of whom are also visually impaired.

To reduce the risk of Covid-19 transmission, the Tokyo Organizing Committee of the Olympic and Paralympic Games, at the direction of the Japanese government, is not “not permitting any personnel other than operational essential staff with roles related to the overall execution of the games, into the country,” the USCOPC told The Washington Post

While a PCA is unquestionably essential for every athlete like Meyers, and therefore the execution of the games, experts tell Inverse it’s also not clear that one PCA for 33 people is actually the best Covid-19 safety protocol.

Further, at a time when the World Health Organization is stressing the importance of physical activity for everyone, including people with disabilities, it’s vital that people in the disability community have role models like Meyers and other Paralympians.

Why this matters — In USA Today, Meyers explains the role of a PCA:

“Athletes with disabilities are able to compete in a setting like the Paralympics because of PCAs. They help us navigate these foreign venues, from the pool deck, athlete check-in to finding where we can eat. But the biggest support they provide athletes like myself is giving us the ability to trust our surroundings – to feel at home for the short time we’re in this new, unfamiliar environment.”

It’s mind-boggling to consider a PCA nonessential. In the same piece, Meyers tells a story about trying to navigate the Paralympic Games in 2016, when she didn’t have a PCA. She says she was surprised to realize that no one on the 2016 U.S. Paralympic Swimming Team was “prepared to care for a deaf-blind athlete.”

She describes trying to navigate the 2016 Games without assistance:

“I was overwhelmed navigating the athletes' village, finding the bus terminal, making my way to the venues where I needed to compete. I had such issues in and around the dining hall, where I wasn’t able to find the right food to eat, that I started skimping on meals.”

If PCAs are essential to helping an athlete find food before and after tournaments, it’s pretty hard to fathom them being nonessential.

“What if there’s an emergency in the middle of the night?” Myers writes. “What if we need to be moved from one venue to another quickly? ... If I don’t have someone I can trust, how can I trust that I will be safe?”

What about the Americans with Disabilities Act?

Lauren Young is the Director of Litigation for Disability Rights Maryland, a nonprofit that provides free legal service to Marylanders of any age with disabilities of any kind. Young tells Inverse that she hasn’t spoken to anyone in Meyers’s family, but if the reports she’s reading are accurate, she describes the situation as “sad and infuriating.”

“The Linchpin of the Americans with Disabilities Act — and section 405, the Rehab act — both of which are binding on the U.S. Olympic and Paralympic Committees, say you look at each case individually and what the individual’s disabilities require,” Young says.

Young hasn’t met Meyers but says that from what she’s read about her sensory disabilities, “it seems quite clear she’s entitled to a disability support person.” Support people like Personal Care Assistants “have to be allowed for folks with disabilities who need them, including people who have sensory disabilities,” Young says.

Some experts believe one PCA for 33 athletes isn’t even adhering to best covid-mitigation practices: It’s safe to assume that the one PCA would be having close contact with most, if not all, of those athletes, creating a close contact “pod” of 34. If each athlete who needed one had their own PCA, those close contact pods could be 2 each, as long as contact with other athletes and PCAs remained at a minimum.

“They’re allowed in because they’re essential.”

George Rutherford, Director of the Prevention and Public Health Group and professor of epidemiology and biostatistics at University of California San Francisco, reminds Inverse of a still-relevant pandemic truth: “The smaller the pod, the less chance for broad dissemination of infection.”

Young believes the Covid-19 part of the equation is almost irrelevant when you’re talking about people who provide essential services to people with disabilities.

“During Covid, hospitals in Maryland are generally instructed that disability support personnel should be allowed in the hospital, even when there were restrictions on other visitors,” she explains. “They’re allowed in because they’re essential.”

Instead of restricting essential personnel, the Olympic and Paralympic Committees should “be protecting our athletes, recognizing what they need, and making the request for what they need,” she says. “Seems pretty basic to me.”

The Inverse analysis — Ultimately, the message the USPOC is sending, intentional or not, to athletes with disabilities is a grim one.

After a year and a half of a pandemic, everyone has been more sedentary than they typically are, and the World Health Organization and other public health advocates have taken notice. This is especially important for people with disabilities, Young says.

“It’s been documented over and over how vital exercises and how secondary diseases are so prevalent for so many folks with disabilities, which is understandable given their health care concerns, and also the inequities in our healthcare system,” she says.

Athletes like Becca Meyers exemplify the fact that people with disabilities can compete at the highest levels of their sport if they are given reasonable, essential accommodations to safely attend practice and competition.

“What kind of message does it send that the Committee isn’t supporting her exactly as she needs to be supported,” Young asks.

“What does this say about those civil rights laws? What message are we sending that our laws require you make accommodations to give people a level playing field but she can’t have someone help her navigate around?”