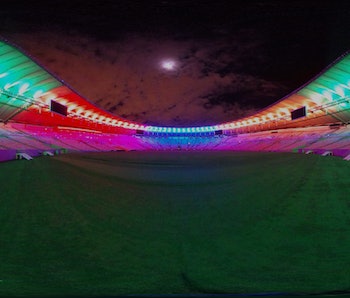 The connections between the Zika virus and what may be its most severe effects — neurological conditions like microcephaly or Guillain–Barré syndrome — are mysterious. The virus, on the other hand, is not. Zika was isolated in Uganda in 1947, first in a rhesus monkey and then in a Aedes aegypti mosquito. By 1951, doctors confirmed Zika caused illness in humans. But Zika didn’t attract much attention. Epidemiologists focused on the more dangerous diseases — dengue and yellow fever — cohabiting A. aegypti. Resources were limited and Zika was basically dismissed as yet another disease thriving in the tropics.

Right now, Zika is thriving in northeast Brazil. That’s a public health crisis compounded by scheduling: The XXXI Summer Olympics are set to kick off on August 5. For that reason, news organizations around the globe are asking whether a viral outbreak could affect the games. The answer to that question is likely yes, but it’s not a particularly compelling query. The real question is whether the International Olympic Committee jeopardized the games by deciding to hold an Olympics in the tropics in the first place. A Zika-like problem may have been inevitable even if the Zika outbreak was not.

“This is just one more complication to add to a very long list of complications,” says Andrew Zimbalist, a sports economist at Smith College and the author of the book Circus Maximus: The Economic Gamble Behind Hosting the Olympics and the World Cup.

Whenever strangers gather far from home, the risk of increasing infectious disease rates is small but non-zero. In the wake of the Haitian earthquake in 2010, the United Nations sent thousands of peacekeepers to the island. Among these were Nepalese soldiers, who, according to work by Yale University and other public health experts, brought with them cholera. (The UN maintained no fault.) Haiti, lacking both the infrastructure and immunity for a disease eradicated in the area a century earlier, saw half a million of its citizens fall ill.

It’s not only disaster that breeds disaster. Super Bowls can spread the flu. Pilgrimages to the Hajj are linked to spikes in meningococcal diseases. The Olympics aren’t immune, either. The flu and measles have broken out at the Winter Games. But in the Olympic pantheon, Zika is an anomaly — it’s spread by animals that need warmth and wetness. Not all host countries are created equal.

To paint tropical climates with a large brush, the rate of infectious disease trends higher the warmer you go. Economics, level of healthcare, and ecology all play a role. Tropical countries tend to be underdeveloped, with more limited healthcare resources. And as they develop, they’re also more likely to encounter new diseases. In his book Spillover, David Quammen outlines how zoonoses — infections that originate in animals — leap to humans, at a rate that increases as previously remote areas are brought into a interconnected world.

Of emerging infectious diseases, seven in 10 originate in wildlife wrote a team in the journal Nature in 2008. University College London biodiveristy researcher and lead author Kate Jones, tells Inverse that, “the number of pathogens are higher at lower latitudes.” When it comes to relocating the Olympics, Jones offers a few caveats. Risk isn’t just a function of increased number of pathogens — it “depends on the level of health care support each country has,” she points out. It’s also tremendously difficult for epidemiologists to predict when zoonotic pathogens emerge, making it tough to assess how dangerous a certain four year period might be.

For its part, the International Olympic Committee is confident Brazil (with the aid of the World Health Organization) can handle Zika. “We welcome the action taken by the WHO to deal with this issue,” a representative tells Inverse. “We remain in close contact with them and are following their guidance.” The World Health Organization predicts the rate of Zika infection to fall off as Brazil dries out by August. Margaret Chan, the WHO’s director general, said that visitors and athletes “will get the maximum protection they need,” Reuters reported. Whether that’s enough to relieve athletes — like American soccer keeper Hope Solo, who told Sports Illustrated she wouldn’t go if she had to make the decision then — remains to be seen.

Not all healthcare professionals are as convinced by the WHO’s confidence. New York University bioethicist Arthur Caplan advocates for postponing the Olympics until a vaccine is finished and widely available. Delaying the games will cause some logistic consternation, he tells Inverse, but re-booking hotels could save even more trouble, particularly for pregnant travelers. And that Rio is mosquito-free later in the year isn’t a given. “There’s certainly been times when Brazil is doused with rain in August,” he says.

There’s also a danger in focusing on Zika alone. The bigger picture of moving the games to a tropical area is the issue of moving the games at all . Other athletes don’t seem so concerned by the disease — members of the rowing team told the Boston Globe the pollution in Rio’s waterways were a larger issue. The dangers aren’t only pollution. Violent crime in Rio de Janeiro, warns the U.S. State Department, includes pickpocketing, robbery, and kidnapping. To hear protesting construction workers tell it, if the stadiums will be finished in time for the Olympics remains an open question.

“Economically, for a developing country to try to host the Olympics is a fool’s errand,” Zimbalist says. “They require billions and billions of dollars of investment in transportation, communications, and sport infrastructure. It just doesn’t pay off.�������������������������� Zimbalist adds that the tourism returns aren’t as high as touted; in fact, he argues that international attention can backfire and dissuade visitors if theres violence or other cracks in the Olympic facade. Whether or not the presence of Zika will color future locations of Olympics was not a question that the IOC answered.

The games will go on in Rio, of course. But though the current Olympic system is taken as a given, it is a historical anomaly. The idea of the Olympics are ancient; moving them far and wide is not. Since the cycle of modern Olympics kicked off in 1896, European and North American locations dominated. There have never been games in Africa or Southeast Asia; the 2016 Olympics will be the first in South America and only the third below the equator, after Melbourne and Sydney.

To give historically underrepresented nations a chance to host the games is a noble goal. Actually putting the Olympics in tropical areas — which Zika could be a portent of things to come — is not the only way to celebrate these countries.

One solution, as tough as it would be in practice, would be to erect a permanent home for the summer games. Countries could still lobby to be the host, but from a fixed location. “It is irresponsible to move the Olympic games every time,” Caplan says. A government throws gobs of cash at building stadiums and support for the massive influx of visitors — London, in 2012, saw 500,000 people; Brazil also expects half a million— that never again will see such a demand. In the bioethicist’s eyes, the expense doesn’t justify the brief international spotlight. “They cost a ton of money and you’re not building other things that your citizens need.” On a global scale of infrastructure rankings, Brazil comes in 120 out of 144 countries, according to The World Economics Forum.

The Olympic games, by their very nature, are global in scale. It is not implausible that the Rio games will contribute to Zika infection across the world. To prevent that, it’s up to humans to eliminate mosquitoes, and up to nature to not rain. If not, well, models of international travel out of Brazil show 60 percent of the populations in Italy, Argentina, and the United States susceptible to seasonal Zika transmission.