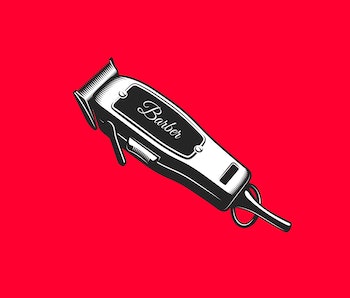 In many cities in America, the coronavirus pandemic has snatched the autonomy we used to take for granted. By this point in your self-imposed quarantine, the thought of wresting back control over your own life may have grown into an overwhelming urge.

That's good news, though. Exerting control during a turbulent situation can be a show of resilience, a well-documented trait in psychology that can reduce stress.

And, also, your hair is getting a little weird. It's time for a quarantine haircut.

How to give yourself an at-home haircut

If you want to an even cut or buzz, don’t do it yourself, says Neil Grupp, a New York City-based hairstylist. It’s nearly impossible to achieve an even style if one shoulder is up or your arm is twisted in an unnatural position. Instead, have a partner take charge. (To feel like you're in control of your life, you must also give up control of the clippers.) You can also reach out to your barber or hairstylist who can guide you step-by-step on video chat.

2. Use thinning shears, not kitchen scissors:

You need a pair of sharp, haircutting scissors, like these. Grupp recommends thinning shears, which enable more subtle adjustments.

Cutting the hair dry enables you to see what the cut will look like in reality, Grupp says. If you cut hair wet, you may also cut too short, because hair expands as it dries.

Something as small as a haircut or home dye can turn around a dark day, psychologist Patricia Farrell tells Inverse: “This is a time that has been given to us, in a very strange way, to begin to make our lives better,” Farrell says. “See it that way, use it in that way, and it will become different for you. You're not going to get depressed, you're going to get hopeful because you are going to develop hope.”

“And if it begins with your hair, fine, do it! Give yourself permission," she says.

Why do people cut their hair in quarantine?

From Marie Antoinette's towering wigs to Twiggy's pixie cut, hair has never just been dead, keratinized cells growing from our heads. For thousands of years, hair has been a marker of identity and form of expression, tied up with gender, sexuality, and class norms.

Hair plays a vital role in the life narrative we create for ourselves, Farrell says: “All of us are actors in our lives, and people don't want to admit that,” she says.

In the military, this phenomenon becomes starkly clear. During basic training, newly enlisted recruits are given an “induction cut,” the shortest, most uniform buzzcut possible. As their hair hits the floor, each person is stripped of their individuality to become one with the unit.

"So many emotions are connected to the way that you look,” Grupp tells Inverse.

Those emotions can run high: In a 2019 poll on 680 American women, style website TYME found that 20 percent of women had cried over a haircut they didn't like. Meanwhile, 29 percent said they felt empowered by having "good hair."

When people look in the mirror, they want to feel a sense of normalcy, Grupp says. Maintaining hair routines can give back a sense of control.

Instead of cutting, “give your hair a break,” Grupp says. “You're gonna see that the texture is going to change and it's going to be better.”

“At the end of the day, a lot of us aren't going outside, so you're kind of one shampoo away from starting all over,” he says.

If you are tempted to take total control and go to town with a pair of scissors, approach with caution: “I wouldn’t advise people to cut it yourself, but I know people are going to do it anyway,” Grupp says.

Even if you screw it up and give yourself some cringe-inducing bangs, don't freak out, Grupp says. "Nothing is permanent.”

Whether you choose to change your hair or take a different tack, reframing lockdown as less of a prison sentence and more of an opportunity to make changes can seriously alleviate your stress, Farrell says.

More like this
Mind and Body
Jan. 22, 2023
Cyclic breathing: Why experts say just 5 minutes a day can reduce stress
By Sarah Sloat
Science
Jan. 28, 2023
How does the placebo effect take hold? A doctor explains two influential factors
By Kathryn T. Hall. and The Reader
Mind and Body
Jan. 16, 2023
One daily social practice could help stave off dementia
By Elana Spivack
LEARN SOMETHING NEW EVERY DAY.
Related Tags
Share: