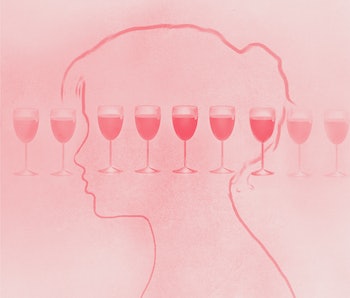 For many people with alcohol use disorder, certain cues — like seeing a glass of wine in a movie, or a happy hour through a bar window — can trigger powerful drinking-related memories long after becoming sober. These cues can set off intense cravings for alcohol and cause relapse even after years of abstinence.

In a new study in mice, researchers evaluated why these memories persist and why they can hijack decision-making.

They discovered that repeatedly drinking alcohol alongside particular cues can activate certain clusters of neurons to form a long-lasting physical memory trace in the brain. In turn, encountering those cues later in life can reactivate this memory trace and trigger relapse.

While memory is an experience stored in the brain, a memory trace is the physical neuronal ensemble linked to a memory. When the research team selectively silenced the alcohol memory trace, they were able to substantially reduced the rate of relapse in mice.

In the future, therapeutically targeting this memory trace may help people resist alcohol cravings, spurred by environmental cues and nagging memories of alcohol, the researchers say.

This finding was published Wednesday in the journal Science Advances.

"Alcohol is experienced as highly rewarding by men and mice and is thought to induce lasting changes in the brain that maintain relapse vulnerability," coauthor Michel van den Oever, a researcher at Vrije Universiteit Amsterdam, tells Inverse.

"Cue-evoked reactivation of the memory trace is not something that can be simply stopped by 'will-power.' It may even occur unconsciously and still elicit strong feelings of craving."

Drinking game — To explore where alcohol-related memories live in the brain, the researchers put mice through a strange drinking game and studied their brain activity. Each time a mouse pressed a lever and received a drop of alcohol solution (containing 8 percent alcohol), a light turned on. Over time, the animals learned to associate the light with the availability of alcohol.

After multiple drinking sessions, turning on the light —even without giving the alcohol reward —triggered the animals to seek alcohol and "relapse."

Throughout this process, the researchers used a technique called viral-TRAP (targeted recombination in activated populations) to permanently tag neurons that were active in the medial prefrontal cortex during the relapse.

This technique revealed that when the mice drank, a small group of neurons in the prefrontal cortex became highly active.

Then, using a drug called clozapine N-oxide, the team selectively silenced this group of neurons.

This silencing reduced cue-evoked relapse one month after the last time the mice drank alcohol. Mice with suppressed neurons were much less likely to press the lever, even when the light turned on

Interestingly, silencing those same neurons didn't make a meaningful difference when the light wasn't present. Meanwhile, silencing a random subset of neurons in the same brain region instead of that specific group didn't make a difference.

The team also replicated the scenario with another tempting substance: sugar. But they did not find that silencing the neurons activated during sugar consumption reduced cue-related relapse. This suggests a learned alcohol-cue, not sugar-cue, is stored in the prefrontal cortex.

Relapse after long periods of abstinence may stem from the reactivation of the persistent memory trace formed during repeated drinking, co-author Esther Visser, a researcher at Vrije Universiteit Amsterdam, tells Inverse.

It only took 15 days for mice to form this memory trace, the authors say. Further research will reveal how long it takes for drinking to make similar changes to the human brain.

It's near impossible to remove alcohol-related cues from our own environment — even an unexpected beer commercial can be a trigger. Because of this, van den Oever argues that the way to prevent relapse is to continue to invest in studying the brain mechanisms that drive relapse. This research may lead to better treatment options for the hundreds of millions of people who struggle with alcohol misuse.

Abstract: Alcohol use disorder is characterized by a high risk of relapse during periods of abstinence. Relapse is often triggered by retrieval of persistent alcohol memories upon exposure to alcohol-associated environmental cues, but little is known about the neuronal circuitry that supports the long-term storage of alcohol cue associations. We found that a small ensemble of neurons in the medial prefrontal cortex (mPFC) of mice was activated during cue-paired alcohol self-administration (SA) and that selective suppression of these neurons 1 month later attenuated cue-induced relapse to alcohol seeking. Inhibition of alcohol seeking was specific to these neurons as suppression of a non– alcohol-related or sucrose SA–activated mPFC ensemble did not affect relapse behavior. Hence, the mPFC neuronal ensemble activated during cue-paired alcohol consumption functions as a lasting memory trace that mediates cue-evoked relapse long after cessation of alcohol intake, thereby providing a potential target for treatment of alcohol relapse vulnerability.