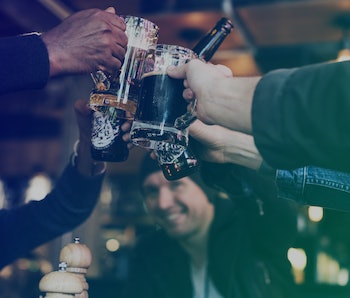 By the end of the evening, the taste of alcohol fades, but traces of the memories formed with a drink in hand linger on for years. The exact content of those memories might be hazy the next day, but the smells, sounds and sites of a familiar bar can be enough to trigger a strong alcohol craving that emanates from deep in the brain. Now scientists have an idea of why these memories feel so strong.

Being at a party, a bar, or out with friends on nights or weekends are all common situations that might trigger a need for alcohol that can be particularly difficult for people struggling to with alcohol abuse.

Gabor Egervari, Ph.D., the co-author of a a paper published Wednesday in the journal Nature and post-doctoral researcher at University of Pennsylvania Perelman School of Medicine, tells Inverse that drinking related memories are incredibly powerful.

Memories of drinking alcohol are filled with the smells, sounds, and sights of a place where you’ve had a few. Those triggers translate to alcohol cravings that can be hard to ignore:

“These memories encode stimuli from the drinking environment that become associated with experiencing alcohol reward. Later exposure to these memories can trigger intense craving and relapse,” he tells Inverse.

Why are these alcohol related memories so powerful? Egervari’s paper points toward the role that alcohol plays in memory formation on a cellular level. Experiments on fruit flies have shown that alcohol can trigger cellular pathways that affect the way we encode memories, and this team, using a mouse model has pulled this idea into even clearer focus.

In a mouse study, Egervari and the team found that the way the body breaks down alcohol ultimately affect how memories of alcohol are formed. Alcohol breakdown, they suggest, triggers a cascade of effects in the brain that depends on two things: the supply of alcohol-related chemicals in your body, and the activity of one key enzyme in the brain.

How alcohol could affect memory formation

When you drink, your body starts to break down alcohol in the liver, where it becomes a series of metabolites (chemicals produced as the body breaks it down). One of those metabolites, called acetate, rapidly appears in the bloodstream where it travels from the liver to the brain. Think of this as a brick that the brain will use to build a structure (or a memory) later on.

Once that acetate reaches the brain, it heads straight for cells in the hippocampus, the area most associated with episodic memory — basically how you remember life’s experiences. Once it’s within those cells, one key enzyme called ACSS2 actually starts transporting that acetate. If acetate is the brick, then ACSS2 is the builder.

In their previous work, this same team at Penn showed that ACSS2 is crucial to the formation of long-term spatial memory. In this most recent study, Egervari found that ACSS2 ends up depositing part of those acetate chemical groups onto histones — which are the proteins that DNA is wound around in the nucleus of the cell.

Overall, this suggests that these additional groups create tiny epigenetic changes that influence how genes are expressed and how ACSS2 gets down to work.

Ultimately that process “contributes to the formation of alcohol related memories,” which can trigger cues that lead to relapse. But it may also be one way to stop those memories from becoming so strong.

In their experiment Egervari and the team kept mice in a box with two compartments: one with saline solutions and one with alcohol. Generally, the mice who are given alcohol in one area of the box tend to hang out in that area once the alcohol is taken away, demonstrating a conditioned place preference.

"Later exposure to these memories can trigger intense craving and relapse."

It turns out that the levels of ACSS2 in their brains actually influences how that conditioned place preference plays out.

When mice had normal levels of ACSS2 in their brains they found that their behavior was typical: they went to the places where they drank alcohol in the past, when given the choice. But when the scientists reduced their ACSS2 levels, they showed no preference for their favorite cozy alcohol corners.

As Egervari adds in a release, this suggests that ACSS2 is the key to forming alcohol-related memory, which means that it may also be one way to stop them from becoming so potent. By finding a way to interfere with ACSS2, he adds that we “could prevent the formation of alcohol-associated memories and thereby decrease the likelihood of relapse in populations with alcohol use problem,” he says.

These results are likely a long way off. Manipulating a key enzyme for memory in mice is one thing, doing it in humans is another. But their experiment shows the physical effects of alcohol in the brain that show themselves in even the haziest drinking memories.

Emerging evidence suggests that epigenetic regulation is dependent on metabolic state, and implicates specific metabolic factors in neural functions that drive behaviour1. In neurons, acetylation of histones relies on the metabolite acetyl-CoA, which is produced from acetate by chromatin-bound acetyl-CoA synthetase 2 (ACSS2)2. Notably, the breakdown of alcohol in the liver leads to a rapid increase in levels of blood acetate3, and alcohol is therefore a major source of acetate in the body. Histone acetylation in neurons may thus be under the influence of acetate that is derived from alcohol4, with potential effects on alcohol-induced gene expression in the brain, and on behaviour5. Here, using in vivo stable-isotope labelling in mice, we show that the metabolism of alcohol contributes to rapid acetylation of histones in the brain, and that this occurs in part through the direct deposition of acetyl groups that are derived from alcohol onto histones in an ACSS2-dependent manner. A similar direct deposition was observed when mice were injected with heavy-labelled acetate in vivo. In a pregnant mouse, exposure to labelled alcohol resulted in the incorporation of labelled acetyl groups into gestating fetal brains. In isolated primary hippocampal neurons ex vivo, extracellular acetate induced transcriptional programs related to learning and memory, which were sensitive to ACSS2 inhibition. We show that alcohol-related associative learning requires ACSS2 in vivo. These findings suggest that there is a direct link between alcohol metabolism and gene regulation, through the ACSS2-dependent acetylation of histones in the brain.

More like this
Mind and Body
14 hours ago
Having this many nightmares a week may be tied to extreme brain aging
By Abidemi Otaiku and The Conversation
Mind and Body
17 hours ago
Why your pee smells after eating asparagus — and why not everyone can smell it
By Katie MacBride
Mind and Body
15 hours ago
One powerful breathing technique could boost a key factor for longevity
By Elana Spivack
Related Tags
Share: