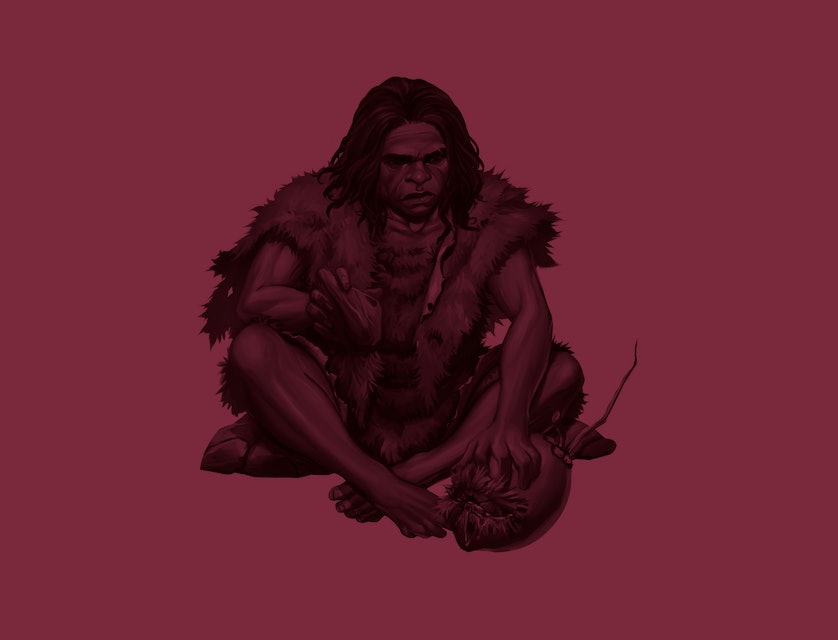 In listening to people talk about their ancestry, I have come to two realizations. The first is that few people actually care about the percentage breakdown of somebody else’s report. Let’s be frank, not many people, besides you, care that you’re 2.3 percent Italian. (Much lower than you thought! Also of little interest!) Learn from me! Resist the urge to overshare!

The other realization is a little more captivating. The most popular part of ancestry tests to other people is how many Neanderthal variants one has in their DNA. Sort of a “How Neanderthal are you?” question.

Whether they experienced a violent, raw life or one that facilitated creating soul-enriching art, Neanderthals live on through their connection with modern humanity. It’s a spellbinding bit of emerging data.

Here’s Sarah Sloat for Inverse in a 2020 story on the connection between Neanderthal and human DNA: “While anthropologists long speculated that Homo sapiens and Neanderthals mated, this interbreeding wasn’t confirmed until May 2010... it was then, only a decade ago, that people became aware of the possibility that Neanderthal DNA lived in them.”

That brings us to our main story for today. It suggests Neanderthals started vanishing from the Earth much earlier than previously thought. The reasons make for an epic story, which you can read up on at the bottom of this email.👇

But first, a quick request — Let me know your favorite video game by sending an email to newsletter at inverse dot com with “VIDEO GAME STORIES” as the subject line. The reasons could be emotional or counterintuitive. In fact, the more unlikely the story, the better. I'm collecting my favorites for a new project. I'll publish a few responses in an upcoming edition of Inverse Daily.

This is an adapted version of the Inverse Daily newsletter for March 10, 2021. Subscribe for free and earn rewards for reading every day in your inbox.

Deep brain stonks — Everyone from seasoned hedge fund managers to redditors tries to predict which stocks will spike next. According to new research, they’re going about it all wrong.

Previous studies have explored how, when aggregated from a group of people, activity in the brain can predict which videos will go viral, which news articles will be shared, and how people in the real world will respond to advertisements. The practice has been dubbed “neuro-forecasting.”

In a study published Monday in the Journal of Neuroscience, scientists at Stanford University applied this theory to the stock market.

“It turned out in this research that brain activity provided a better forecast than behavior,” co-author Brian Knutson, a professor of psychology and neuroscience at Stanford University, tells Inverse.

Collector culture — Sony has put out plenty of special-edition consoles over the years, but some are so rare, beautiful, or bizarre that they’ve become coveted collector’s items. Card story editor Bryan Lawver has collected some of the most prized out there with this card story.

Read the full story on the latest from the CDC.

Hubble trouble? — NASA’s Hubble Space Telescope has orbited Earth for more than 30 years — and it is showing its age. This past weekend, it hit a stumbling block from which it has yet to emerge, reports science editor John Wenz.

On Sunday, the NASA Hubble Twitter account posted news the craft had entered safe mode at around 4 a.m. Eastern. Here on Earth, mission scientists scrambled to put our eye in the sky back online.

What NASA is telling Inverse: “The Hubble Space Telescope is in good condition but remains in safe mode as a precaution while the team works to fully understand the error encountered.”

Where they went — Our big story today comes from nature writer Tara Yarlagadda. She writes that a study published Monday offers new answers about exactly when the ancient humans we know as Neanderthals went extinct.

This new research pushes back the timeline of when Neanderthals may have vanished from Europe, with evidence suggesting Neanderthals had likely disappeared from northwestern Europe roughly 40,000 to 44,000 years ago — far earlier than previously thought.

(Previous radiocarbon dating analysis of Neanderthal remains found in Belgium determined it might have been as recently as 24,000 years ago.)

Getting the date of these Neanderthal fossils precisely right is crucial to understanding the extinction of Neanderthals, as well as their relationship to the first modern humans.

Read the full story on the answer why.

More on the ancient world:

That’s all for this edition of Inverse Daily. You can follow me on Twitter @nicklucchesi, where I share some of my favorite stories from Inverse, Input, and Mic every day.

Happy birthday to Chuck Norris. The action movie star turns 80 years old today. Norris gained early fame with roles in movies that showed off his martial arts abilities. (He famously was killed by Bruce Lee in Way of the Dragon.) Those parts laid the foundation for his rise to mainstream stardom in the early ‘80s. It’s safe to say Norris found his fame to be more durable than most as he moved into a successful TV run in the ‘90s. Later, he became the inspiration for one of the internet’s first memes (see above). Bruce Lee killed Chuck Norris in 1972, and yet, Norris still lives in 2021. There’s a Chuck Norris joke in there somewhere.