With virtual reality, scientists reveal a fatal flaw in one of soccer's most trusted defensive moves 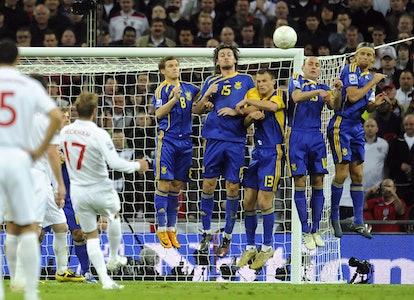 It was the final 60 seconds of what had been a tense 90 minutes. England was a goal down to Greece in the 2001 FIFA World Cup qualifying match that would decide which country would go on to the final stages of the World Cup competition. David Beckham, then the 26-year-old England striker, took a chance with a free kick awarded 30 long yards away from the Greek goal line.

The entire Greek side fell into place in front of their goal, with four men forming a tight phalanx in front of their goalkeeper — ”the wall.” At such a distance, Beckham’s last-ditch chance at an equalizing goal — and the chance of staying in the World Cup — was a gamble. With men in the way of his line of sight, it seemed to the spectators like an impossibility.

And then it happened: Beckham scored.

The ball curved around the wall of men, swiftly finding the back of the net, untouched by the stunned Greek goalkeeper. The classic defense maneuver, the wall, was no match for Beckham’s ability to bend a ball, sending it careening into a net as he so desired. But for players not so skilled as Beckham, the wall can and does work to stop free kicks that have a chance at the goal. In this move, the defense line in front of the goal, hoping to prevent the striker from scoring.

One goal, after all, can be the difference between winning and losing a game of soccer. The wall is tried and tested — but it may also be fundamentally flawed. A new study published Wednesday in the journal PLOS ONE uses virtual reality to show how the very logic behind the wall may work in the opposing team’s favor.

Cathy Craig is a professor of psychology at Ulster University in Northern Ireland and one of the authors of the study. She tells Inverse she became interested in the psychological elements of sports around the same time as Beckham made his incredible goal.

Craig saw the potential of what at the time were “extremely rudimentary” virtual reality systems for testing how psychology plays into players’ performances on the field — not just in soccer, but in other sports, too. Craig recalls using the Cybermind hi-res virtual-reality headsets to do her first experiments.

“We used very old headsets that cost a lot of money, and the graphics were not very good at all, but it did the job of being able to at least recreate that optical information that the brain would normally have in those situations,” Craig says.

One of her early studies looked at how a soccer player “bending” the ball, just like Beckham, affects a goalkeeper’s ability to block the shot. Since then, Craig has witnessed an “explosion” in the growth of virtual-reality technology over the past decade — enabling sports researchers like her to get an unparalleled view of the beautiful game.

In the new study, Craig wanted to know if the human wall soccer teams put up to block a player’s free kick from the goal was actually helping or hurting their cause. To do this, the team recruited 15 novice and 10 expert goalkeepers, and had them try to block shots in a virtual game of the researchers’ own design.

In this fantasy game, the ball would shoot toward the goal at the same trajectory, but from different positions, with and without a wall. The goalkeepers, for their part, had no prior knowledge of which scenario they would face during the trials. The researchers then measured how the players responded to each scenario.

Specifically, Craig wanted to observe what the goalkeepers did, when they did it, and how they did it.

“The big question was: What does the position of the wall do? And this is the neat thing about VR technology is you have reproducibility across trials,” Craig says.

“If you tried to do this in real life, it would be impossible, because you’d be expecting your kicker to kick the ball exactly the same way each time.”

Craig says the virtual-reality system allowed them to track exactly how the player was moving, and where the ball was at the moment they decided to move.

What they found defied the logic of the wall entirely: Sometimes, the wall hindered goalkeepers’ performance by partially blocking their view of the ball after it had been kicked, giving them less time to predict its trajectory.

She says expert goalkeepers were, perhaps predictably, more able to make up for this loss of view with skill and instinct than novice players.

But based on these findings, it may not always be a good idea to put up a wall to defend a free kick.

“We’re not necessarily saying don’t have a wall, but we would really question coaches and goalkeepers to think about when is it good and when is it not, and a good way to do that is with things like VR technology,” Craig says.

The history behind the wall is interesting, Craig notes. According to several historians she and her team consulted with, the wall used to function as a purely physical barrier designed to block the shot. But this worked best only in the early days of soccer, when the balls were made of heavy leather, unable to lift far off the ground. These days, expert players like Beckham can easily lift a modern, lightweight soccer ball over or even around the wall. This ability changes the point of the wall, Craig says.

“The fact that they can skillfully lift it over means that then you’re trying to guess where that ball is going to come from,” Craig explains.

“We noticed that in the case where we had the ball in the center of the goal — right in front of the goalkeeper in the center — that made it even more difficult because you’re trying to guess if it’s coming from left or right when you have the wall placed there.”

The team’s virtual-reality program may soon make it out the lab. It can be used by coaches and players around the world, and with it they can create their own, customized sessions to practice different free-kick scenarios. Craig says one thing coaches will like about it is that players tend to understand and accept critiques more often when there’s data to back the criticism up. With the virtual-reality tool this team has developed, they can replay their sessions and see their mistakes first-hand. It could also prove useful for players who have injured themselves, but want to stay in the zone without getting back on the field. One player the research team worked with, for example, had injured their wrist, but found the virtual training sessions useful practice while they were healing and couldn’t block real balls.

There is one major limitation to this system, however. You cannot recreate the sense of touch with a virtual-reality program, Craig says. She should know, because her team tried. They tested a system that used vibrations, similar to a video game controller, but they were too distracting. Instead, they found auditory enforcement, like recreating the sound of the ball being kicked and it hitting your gloves, helps a bit to give the sense of realness their system lacks.

As for what’s next, Craig simply wants to see how far this technology can be taken. She wants to experiment with different ways it could help players improve, and, perhaps, change how we play sports. The researchers have already been approached by a field hockey team, she says.

“I think what’s next is trying to understand how we can best use this technology to improve performance,” Craig says. “That’s, for me, the thing that’s going to be really exciting.”

Abstract: Free kicks are an important goal scoring opportunity in football. It is an unwritten rule that the goalkeeper places a wall of defending players with the aim of making scoring harder for the attacking team. However, the defensive wall can occlude the movements of the kicker, as well as the initial part of the ball trajectory. Research on one-handed catching suggests that a ball coming into view later will likely delay movement initiation and possibly affect per- formance. Here, we used virtual reality to investigate the effect of the visual occlusion of the initial ball trajectory by the wall on the performance of naïve participants and skilled goal- keepers. We showed that movements were initiated significantly later when the wall was present, but not by the same amount as the duration of occlusion (~200ms, versus a move- ment delay of ~70-90ms); movements were thus initiated sooner after the ball came into view, based on less accumulated information. For both naïve participants and skilled goal- keepers this delayed initiation significantly affected performance (i.e., 3.6cm and 1.5cm larger spatial hand error, respectively, not differing significantly between the groups). These performance reductions were significantly larger for shorter flight times, reaching increased spatial errors of 4.5cm and 2.8cm for both groups, respectively. Further analyses showed that the wall-induced performance reduction did not differ significantly between free kicks with and without sideward curve. The wall influenced early movement biases, but only for free kicks with curve in the same direction as the required movement; these biases were away from the final ball position, thus hampering performance. Our results cannot suggest an all-out removal of the wall–this study only considered one potential downside–but should motivate goalkeepers to continuously evaluate whether placing a wall is their best option. This seems most pertinent when facing expert free kick takers for whom the wall does not act as a block (i.e., whose kicks consistently scale the wall).