"At the molecular level... lipids from foods can have an influence on the taste of wine." 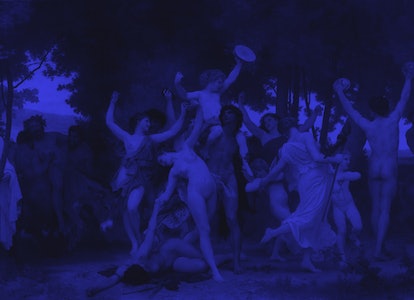 Nothing says sophistication like pairing a glass of full-bodied, Cabernet Sauvignon with a roast loin of the finest Aberdeen Angus beef. But new research out of one of France’s most famous wine regions, Bordeaux, suggests pairing high-tannin red wines like Cabernet, Nebbiolo, or Syrah with a greasy hamburger tastes even better.

Swirling, sniffing, and swallowing a mouthful of fine wine can help the more discerning of drinkers pick apart the (tasty) chemical mysteries within. The ritual is a commonplace activity among wine connoisseurs. For centuries, we have used this sensory knowledge to matchmake foods with different grape fermentations, but the molecular underpinnings of these perfect pairings isn’t well understood. And in that knowledge gap may lie greater revelations — we may be missing something fundamental when it comes to picking the right wine for the right food.

Why it matters — Perfect wine pairings won’t change the world, but they can transform your dinner date, and, on a more scientific level, offer deeper understandings of the chemical lives of this most-beloved of beverages.

What's new — Julie Géan is the first author on the study and associate professor of physical chemistry at the University of Bordeaux — a region of southern France intrinsically linked to the history of wine. She tells Inverse the study marks the first time scientists have looked at this kind of wine pairing in this way.

"It is the first time that we demonstrate at the molecular level that lipids and tannins coming from red wines are able to interact and that lipids from foods can have an influence on the taste of wine," says Géan.

The study was published this month in the Journal of Agricultural and Food Chemistry.

Géan says there are other studies out there which examine the antioxidant properties of certain components in wine. But few gastronomical investigations have considered how these molecular interactions play out in terms of the actual sensations people have when they drink the wine.

"In the field of gastronomy, there's nothing about this," Géan says, referring to molecular analysis. "They are more interested in the sensory analysis [only]."

In the study, Géan and her team were interested in how lipids (fatty molecules) interacted with the tannins found in rich red wines like those made from Cabernet Sauvignon or Syrah grapes, for example. Higher levels of tannins can interact with saliva to create an astringent sensation on someone's palate. As a result, Géan tells Inverse this can make a high-tannin wine taste astringent.

Anecdotal and sensory evidence suggests fatty foods, rich in lipid molecules, have some mitigating effect on the acidic punch — just think about how a piece of creamy brie, for example, can enhance a mouthful of cheap Syrah your friend brought to dinner. This team of French chemists decided to figure out exactly what was happening at the molecular level to produce this change.

What they did — To investigate the inner workings of wine pairings, the researchers followed a two-step plan:

In the first experiment, the team was interested in seeing how both the form and size of lipids changed when exposed to Catechin over an eight-day period.

What they discovered — In the biophysical study, the presence of Catechin in the oil-in-water emulsion appeared to cause the lipid droplets to clump together, the researchers report.

According to Géan, this minute interaction had a big effect on the overall sensory experience of ingesting these compounds. In the sensory experiment, the team found participants who consumed small amounts of oil before consuming the tannin solution reported experiencing a less intense astringency on drinking the tannins.

Interestingly, participants who consumed olive oil in particular reported how the taste of the tannin solution transformed into a fruity taste.

Chemically speaking, Géan speculates this changed sensation may arise from the Catechin clinging to the lipid globules, leaving less space for saliva to interact with the tannin molecules and generate an acerbic taste.

How this can be used — Géan says the team can’t say which fatty acids have the most neutralizing impact on tannic wines, but she suggests that rich French foods like paté or Camembert may be good bets for pairing with these reds. (For concerned parties, it's on their agenda, so watch this space.)

For a more typical American palate, the findings suggest there is a good chance your favorite take-out fries do, in fact, pair very well with that nice Merlot you've been saving — for science.

What's next — Beyond this wine study, Géan says there are still many interesting unknowns about how wine and food interact to explore in future research. In addition to better characterizing the effects of different fatty acids in dietary lipids, it would also be interesting to study how the soil used to grow the grapes or the wooden barrels used to store it might change the chemical composition — and thus, the taste — of different wines, too.

"I like that this work can perhaps help some Sommelier to choose a better meal in accordance with a wine," Géan says.

Abstract: Wine is very often consumed with a meal. However, although it is well known to tasters that the taste of wine changes in the presence of food, the influence of dietary lipids on wine astringency and bitterness caused by grape tannins is not well established from a molecular point of view. In this context, we investigated wine tannin−lipid interactions by combining biophysical techniques to sensory analysis. Nuclear magnetic resonance and optical and electron microscopy showed an interaction between catechin, a majority component of grape tannins, and lipid droplets from a phospholipid-stabilized oil-in-water emulsion, characterized by (a) an increase in the droplet size in the presence of catechin, (b) slowing of their size growth over time, and (c) an increase in lipid dynamics in the droplet interfacial layer. Those results were strengthened by sensory analysis, which demonstrated that dietary oils decrease the perception of astringency of grape tannin solutions. Our results highlight that dietary lipids are crucial molecular agents impacting our sensory perception during wine consumption.

Update: This article has been updated to better reflect how fats affect the astringency of the tannin solutions, and to make more clear how lipids and Catechin interact with each other.

More like this
Mind and Body
5.5.2022 1:00 PM
Does submerging an avocado in water keep it fresh? The science behind the hack
By Elana Spivack
Innovation
5.13.2022 11:00 AM
These robots have one special skill that could make human chefs obsolete
By Sascha Brodsky
Mind and Body
5.14.2022 3:00 PM
Does smoked meat cause cancer? A dietitian assesses the damage
By Elana Spivack
Related Tags
Share: