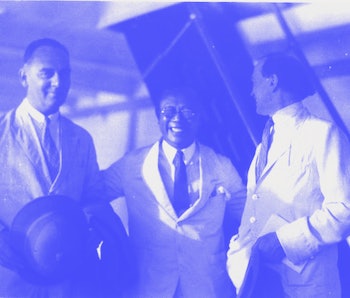 Dr. Wu Lien-teh did not mess around when it came to infectious disease in the early 1900s. A century ago, he was battling a plague in China and made a radical proposal based on an act that itself was pioneering for its culture.

Today, his innovation is an everyday sight. And thanks to his ingenuity and gumption, we’re a step ahead when dealing with health disasters like Covid-19.

On what would have been his 142nd birthday, Google honored his legacy with its “Google Doodle,” an increasingly prestigious act of digital recognition for often overlooked pioneers in their field.

You see, the doctor, realizing that plague was airborne, came up with a better face mask.

Lien-teh grew up in what is now a part of Malaysia but used to be part of a colony of the United Kingdom called the Straits settlements. His family was from China, so when he was accepted to Cambridge’s medical school in 1896 with a Queen’s Scholarship, he became the first student of Chinese descent to ever attend.

He quickly made a name for himself, winning a number of awards and scholarships, which allowed him to travel to Liverpool, Germany, Paris, and Baltimore for research. But he eventually returned to the Straits Settlements. It was here that an opportunity from China came — he was asked to sail to Tianjin, where he took the role of vice-director at the Imperial Army College.

His big moment — When news of a deadly plague in Northern Manchuria with almost 100 percent mortality reached Beijing in 1910, Lien-teh was asked to go and help stop the rapid spread.

This was the pneumonic plague, stemming from the bubonic plague and caused by bacteria Yersinia pestis, the same bacteria behind the long-gone Black Plague. This outbreak had originated with marmot trappers along the Siberian border and killed 60,000 people in just four months.

According to an obituary of Lien-teh published in the British Medical Journal:

“He had no doubts what he was up against. At the time of diagnosis, the pneumonic plague was a sentence of death. Doctors stood in front of their patients in full blast of their breath to examine their chests. They paid the price.”

Lien-teh conducted an autopsy on a Japanese woman who had died from the plague, the first-ever done in China, after facing much resistance because of Chinese cultural customs that condemned the practice. He came up with a new theory that flew in the face of the common narrative at the time: rather than being spread by fleas and rats, the plague was airborne in humans.

After this, Lien-teh wasted no time in introducing a more protective version of anti-plague masks by adding more gauze, protective layers, and a better way to tie the mask to prevent movement.

Today, his masks are recognized as early precursors to the N95 masks we use for extra protection today.

The history of medical masks

Like today, some met the suggestion to wear a mask to prevent spread with contempt and resistance.

In fact, a prominent French doctor who intended to replace Lien-teh at his post was thought to have hurled racial slurs at the Chinese doctor. According to an account from Lien-teh, the French doctor “raised both his arms in a threatening manner, and with bulging eyes cried out… ‘How dare you laugh at me and contradict your superior?’”

The French doctor, known now only as Dr. Mesny, is said to have operated on a number of plague patients, and “refusing any kind of mask, very soon succumbed.”

Lien-teh’s other contributions — But perhaps even more crucial to Lien Teh’s success in eventually curbing the outbreak was his insistence on cremating the bodies of those who had died from their infection. According to the Singapore Medical Journal, he was shocked to find 2,000 unburied bodies in the area.

He knew that when the weather turned warmer, the bodies left out would be a grave public health danger. Lien-teh had to convince local officials to agree, despite strong cultural opposition to the practice, to a mass cremation because the ground was too cold for burial. Making matters even grimmer, they had to soak bodies in paraffin and burn them on funeral pyres.

With an increase in cremation, encouragement to wear gauze and cotton masks, as well as advice from Lien-teh to monitor the railways and other transportation sites, mortality from the Manchurian Plague declined and the disease ran its course.

Though Wu Lien-teh met other challenges in his life: the death of a first wife and two children, the burning of his personal possessions following a Japanese invasion, even accusations of being a Chinese spy and an opium possession conviction, his medical legacy as a grandparent of public health persists.

His work and later leadership as one of the first Chinese public health services moved the medical world forward. We’re still reaping the benefits of his contributions — including the “anti-plague” mask — today.

More like this
Science
6.16.2022 10:00 AM
Climate change and air pollution are wrecking children’s health, a landmark review reveals
By Tara Yarlagadda
Mind and Body
6.15.2022 7:51 PM
A single gene could stump a deadly parasitic infection
By Allison Parshall
Mind and Body
6.21.2022 10:00 AM
What is hybrid immunity? Two experts explain the mix of vaccination and infection
By Grace C Roberts, Lena Glaser and The Conversation