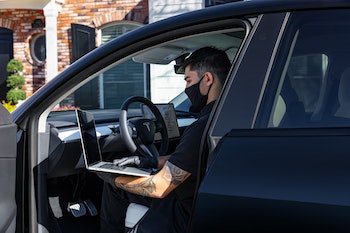 That is despite the National Transportation Safety Board’s safety concerns and the National Highway Traffic Safety Administration’s ongoing investigation into Tesla Autopilot.

The Button, however, is less of a request button and more of a good behavior sticker — Tesla drivers can earn beta FSD access if and only if their “driving behavior is good for seven days,” Musk wrote on Twitter. Since this sticker comes with software bugs and consequences of life or death, some drivers are finding that proving “good behavior” is a bit harder than it sounds.

Space tourists are experiencing the common travel woe of being dissatisfied with their bathroom. On Crew Dragon, though, consequences can be a little more dire than just a lack of toilet paper.

Luckily, and despite popular belief, the toilet troubles that plagued the Inspiration4 crew last week came down to a malfunctioning fan. Although the fan did set off the ship’s mayday alarm system, the crew was able to resolve the problem with the help of SpaceX ground control. And flight leader Jared Isaacman needs you to know his truth — “I want to be 100% clear,” he told press last Thursday, “there were no issues in the cabin at all as it relates to that.” So, no flying turds this time, confirmed.

But enough spaceflight potty humor. You should also know that the U.S. Space Force has awarded a total of $87.5 million to next-generation spaceflight companies, with $14.47 million going to SpaceX. SpaceX will use the award for Raptor engine testing, which is key to an orbital launch’s success, along with liquid methane and combustion stability testing, reports GeekWire.

To learn more about the history of SpaceX’s relationship with the government, check out an exclusive clip from PBS documentary episode, Elon Musk: In Their Own Words, available only on Inverse. The full episode will air tomorrow, September 28, at 8 p.m. Eastern time.

10. Elon Musk and Grimes call it quits. But they still “love each other." Boring!

9. Blue Origin’s next civilian space visit will take place on October 12. The company claims it has already sold $100 million worth of New Shepard rocket tickets, but has not disclosed the price of seats on this particular flight. Go figure!

8. 90-year-old actor William Shatner, best known for his portrayal of Captain Kirk in the Star Trek franchise, will take up a seat on an upcoming Blue Origin flight. His journey will be filmed for a space tourism documentary, the perhaps natural successor to a promotional timeshare video. Where no actor has gone before, etc.

7. Some Musk fans think a cryptocurrency named after his dog, Floki, could reach a $10 billion market cap valuation. What do you think? Read more.

6. Bill Gates thinks Musk, Bezos, and Branson should focus their efforts elsewhere. The billionaires are fighting.

3. While Musk sets the scene, engineers around the world try to make it happen and anticipate problems before they happen. Like the University of Cincinnati researchers working on a “gas station” for Mars. Like, for rockets.

2. But what happens when it’s finally time to go to the big rocket in the sky? What happens to the dead on Mars? Nothing you’d expect.

1. And a piece of Musk history: On September 15, 2016, Musk conducted a 20-minute interview with startup accelerator Y Combinator. Musk spoke on a few interesting topics for young engineering hopefuls, like if a PhD is worth it, how to make a “crazy” decision, and his vision for the future of A.I. He also miscategorized parts of the brain (the cerebral cortex is for all control and information-processing, not just “thinking,” Elon!), but I’m willing to look past it.

This has been Musk Reads #266, the weekly rundown of essential reading about futurist and entrepreneur Elon Musk. I’m Ashley Bardhan, assistant to Musk Reads.

More like this
Science
6.27.2022 8:45 PM
NASA found the crash site of the rocket booster that hit the Moon in March
By Kiona Smith
Innovation
7.2.2022 6:00 PM
Are self-driving cars safe? The tipping point rests on a psychological illusion
By Jean-François Bonnefon and The Reader
Innovation
7.6.2022 1:00 PM
Rivian R1S Review: The best electric SUV yet
By Jordan Golson
Related Tags
Share: