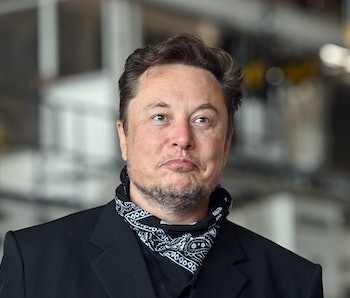 Hot on Netflix’s trail, PBS will focus an episode of its In Their Own Words documentary series on Elon Musk. The episode wants to display the world’s most popular billionaire in a softer light than biography Power Play’s hard lines.

The hour-long episode will premiere on Wednesday, September 29 at 8 p.m. Eastern time, and will include Musk-expert interviews with journalists, scientists, and former NASA astronaut Garrett Reisman (who you can hear even more from in our exclusive Musk Reads+ interview).

Until Wednesday comes and brings the full episode along with it, whet your appetite with a first look at the series, provided exclusively to Inverse.

In the clip, we hear interviews with Reisman, journalists Tim Urban and Miles O’Brien, and former NASA higher-up Lori Garver, who once served as Deputy Administrator and has received three NASA Distinguished Service Medals.

Garver also co-wrote the book Bureaucrats and Billionaires: The Race to Save NASA with CNBC space reporter Michael Sheetz, documenting her early experiences with Musk, Jeff Bezos, and other harbingers of modern spaceflight.

It’s interesting to hear the spaceflight experts, especially those with prior NASA experience, share their thoughts on Musk’s early history.

The dominating fact of the clip, though, is perhaps unexpected when looking at the healthy, NASA-approved private space company today. Reisman and Garver share with us that, at SpaceX’s inception, the now-prominent private spaceflight company was once considered little more than a small fry by the government.

“I was in meetings at the Pentagon for years where they would make fun of Elon and me for even pushing NASA to invest in these ‘new ways’ of doing space transportation,” Garver says in the clip.

“They believed that they would never, never trust their very precious military satellites to that kid,” Garver continues, heavy on the sarcasm. “They like to believe what they do is so hard and so special and, maybe, even secret, that no one else can do it.”

“There was a big difference in corporate culture between the entire aerospace industry and SpaceX, no question about it,” Reisman said. “The aerospace industry had a certain way of doing things, and then you had SpaceX, that really had [...] the status quo as the enemy.”

Although SpaceX has certainly made its own way and waves since those uncertain days, consistently strengthening its relationship to NASA and other naysayers, Musk’s commitment to being different has stayed put (even after a breakup).