Life on Mars? After Inspiration4, what SpaceX advisor sees for the future

“There's a possibility...that we'll find life on Mars in the next 20 years” 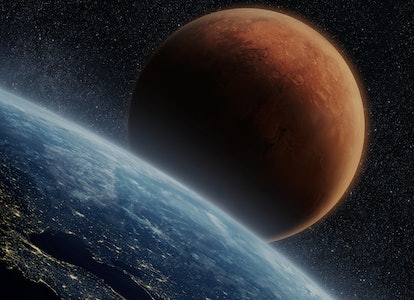 Life on Mars, extraterrestrial cities, giant floating space stations — the future of space looks bright, according to one former astronaut.

“Space, right now ... there's so much going on,” Reisman says. “It seems like every week, there's another major event that blows up my Twitter feed!”

It’s an exciting time for Reisman, as his Crew Dragon capsule transported the first all-civilian private mission to orbit this week. The team of four will spend around three days orbiting the Earth at a higher altitude than the International Space Station, conducting scientific research and demonstrating that space is no longer for the carefully selected best of the best.

SpaceX CEO Elon Musk plans to use missions like these to help fund his more ambitious goal: transforming humanity into a multi-planetary species.

“This is kind of a rare exception in the doom and gloom,” Reisman says. He cites the Covid-19 pandemic, New York underwater, Lake Tahoe fires, the war in Afghanistan, and corrosive political discourse among the issues. “But then you see these rockets flying. It's this little shining bit of hope.”

Want to know more about Crew Dragon’s inception, SpaceX’s surprising spacesuits, and why failure was “not an option” for the Elon Musk-led company? Read the full interview with Garrett Reisman, only in MUSK READS+.

After Inspiration4: What comes next

Reisman explains that SpaceX will use the Crew Dragon capsule for a series of missions planned by Axiom Space. The space company plans to build its own private space station, using the ISS as its starting point before eventually detaching after building out far enough. The first mission is scheduled for no earlier than January 2022, and subsequent missions are planned to occur every six months thereafter.

But Crew Dragon could be phased out soon by Starship, the fully-reusable rocket first unveiled by Musk in 2017. This ship, expected to host its first orbital test this year, is designed to send over 150 tons or 100 people into space at a time.

Its future is looking bright: in April 2021, NASA selected Starship as the landing vehicle for its Artemis lunar missions. The mission will launch astronauts using the under-development Space Launch System rocket, while the Starship will ferry the crew from the spaceship to the Moon’s surface and back.

Reisman described the plan as “like taking a rowboat across the Atlantic and then getting in a cruise ship to go from the outside of the harbor to the dock.”

From there, the ship could enable a self-sustaining city on Mars. Musk aims to complete the city by 2050, ferrying one million tons of cargo. That requires a reusable rocket with a large carrying capacity.

If Starship replaces Reisman’s handiwork, he will be thrilled “if it lives up to its promise, and it’ll take us to a whole new level.”

It’s all a far cry from when Reisman started at NASA in 1998 when the agency’s biggest ambition was to build a space station. Today, he says, the space race is brimming with ideas:

Will we see a unifying moment on the scale of humans landing on the Moon in 1969? “For a lot of us,” Reisman says, the Demo-2 launch of Crew Dragon “came close.”

As the first all-civilian mission continues to orbit the Earth, it’s a reminder that it could pale in comparison to what comes next.

MUSK READS+ is a fully independent operation. We are not Elon Musk, nor are we employed by him. Our job is to report the events we find interesting, giving you the inside look at the worlds of space rockets, electric cars, clean energy, and more. It means first-hand accounts of a SpaceX rocket launch, Tesla insights from third-party analysts, and more.