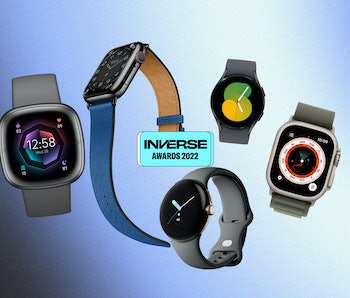 We may receive a portion of sales if you purchase a product through a link in this article.
Ian Carlos Campbell
Dec. 21, 2022

While the smartphone market continued to cool, smartwatches only got more interesting in 2022.

Samsung and Apple still command the largest market share, but both companies felt the pressure to do something genuinely new. Their answer? A “Pro” category for the most premium and athletic-minded customers. Besides being more expensive, these new wearables get that much closer to being entirely standalone devices and realizing the original promise of a wearable computer.

For anyone not trying to run a triathlon, 2022 was also the year Google finally entered the smartwatch ecosystem. It was clear the company was planning on making moves when it bought Fitbit, but the first Pixel-branded smartwatch is as good an indication as any that smartwatch design can still be exciting.

The question of whether or not a smartwatch makes sense for everyone remains unanswered, but wearable devices are here to stay, and if you decided to hop on the bandwagon this year, you were in for a treat. Here are the best smartwatches of 2022, presented in no particular order because truly there’s something here for everyone.

The Apple Watch Series 8 is indistinguishable from the Series 7, mainly because Apple’s smartwatch is in a very comfortable place right now. With all of the fitness and heart-health features a person could ask for, and a new temperature sensor on the Series 8 for offering insights into your reproductive health, there’s little reason to look elsewhere if you have an iPhone. The Apple Watch Series 8 might look a bit boring, but Apple will support it until the cows come home, and because of its popularity, you’ll never have to worry about finding new watchbands.

Fitbit’s Sense 2 might not offer the premium design of the Pixel Watch, but it does offer unique health features that didn’t make it on Google’s premium smartwatch. The Sense 2 is all about stress management, combining data from a new cEDA (continuous electrodermal activity) sensor, accelerometer, heart rate monitor, and body temperature sensor to help you figure out what triggers your stress. It’s also just a smartwatch, though Fitbit’s selection of third-party apps is smaller than what you’ll find on Wear OS.

A competent smartwatch with access to Fitbit’s Premium subscription service, and a unique set of stress management features.

The Pixel Watch is Google’s take on the smartwatch and as you might expect, it puts Google Assistant and Fitbit at the forefront. While not the most full-featured out of the gate, the Pixel Watch stands out because of its circular, dew-drop design, which instantly differentiates it from the Apple Watch and other boring squares. The Pixel Watch is an excellent, if simple, smartwatch for anyone on Android, but especially if you’re already a fan of Google’s hardware design.

Google knocked the hardware design of the Pixel Watch out of the park.

Samsung beat Apple to the punch in offering a “Pro” smartwatch earlier this year, though their interpretations differ. The Galaxy Watch 5 Pro has a new body temperature sensor for health tracking, but its most important feature is a much longer battery life. Thanks to a 590 mAh battery, Samsung claims the Galaxy Watch 5 Pro can get up to 80 hours of battery life — nothing to sneeze at if you’re making a multi-day trek and want to have your watch or maps handy.

Samsung made a big smartwatch with an even bigger battery life.

The Apple Watch Ultra is a major departure for Apple, sacrificing very little function for form and deliberately targeting an extreme-if-niche customer in a way few of its products do. The truth, of course, is that plenty of non-professionals buy Apple’s Pro products, and the Apple Watch UItra will be no different. For anyone who does pony up, they’ll get a larger 49mm display, brighter screen, 36 hours of battery life, water resistance up to 100 meters, a set of exclusive watch faces, and a watch that’s a lot more independent than its predecessors.

Apple’s highest end watch targets extreme athletes and anyone who wants a smartwatch that can do that much more on a single charge.

Garmin offers a wide variety of smartwatches and fitness trackers, but the Vivomove Sport is intriguing because of how it hides its smart features under a normal watch face. Hybrid smartwatches aren’t a new idea, but you sacrifice very little with the Vivomove Sport in exchange for a whole five days of battery life. When you need to check your heart rate, receive notifications, or track your run, it’s all a tap away. And when you don’t, you can join the ranks of normal watch owners without issue.

Garmin’s Vivomove Sport is a hybrid smartwatch that really does have the best of both fitness trackers and traditional timepieces.

The Galaxy Watch 5 doesn’t reinvent the wheel, but does offer more battery life and a new skint temperature sensor.