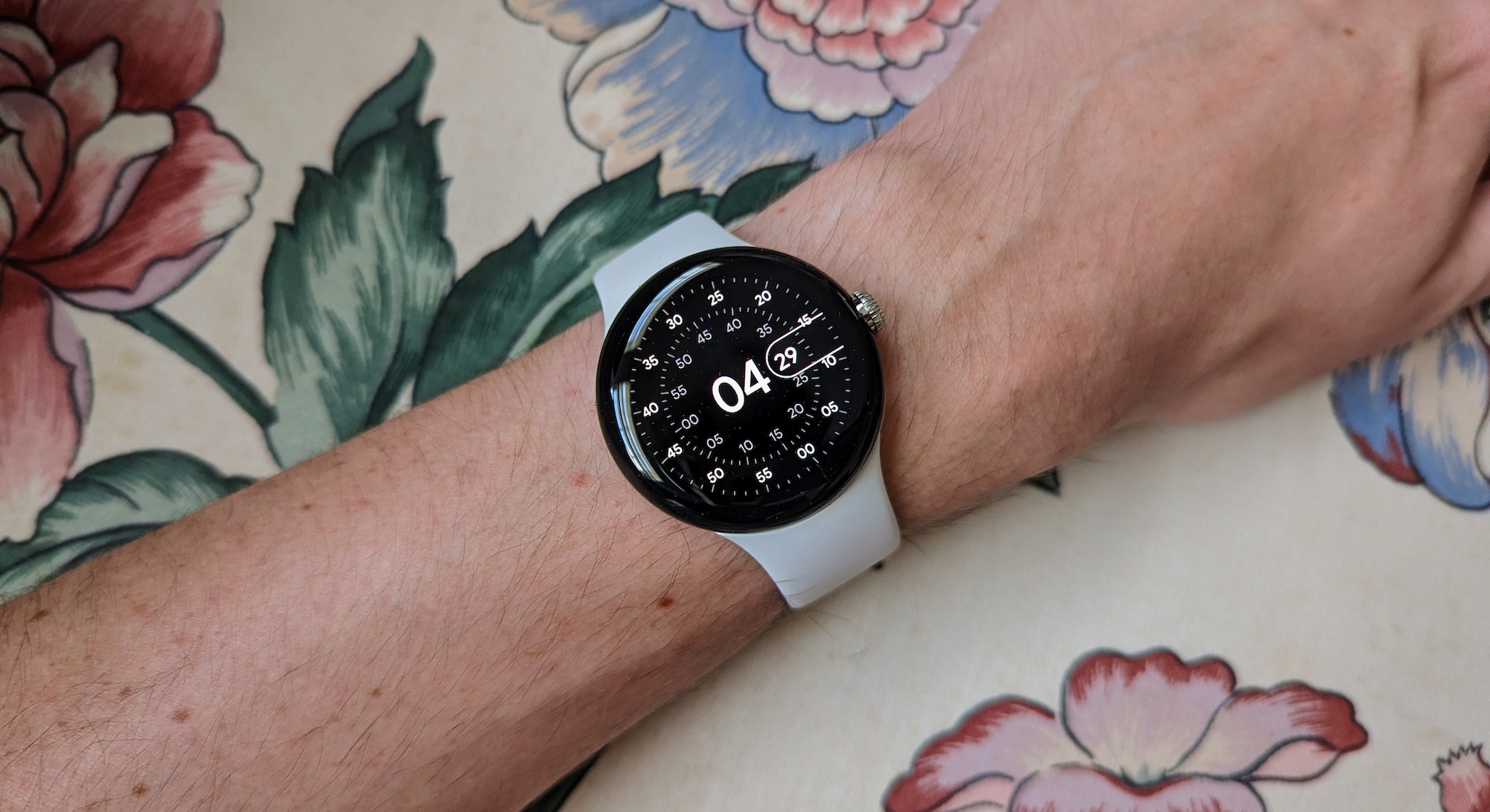 The definition of a smartwatch today is very different from what it was when Apple released the first Apple Watch in 2015 or even when Google launched its Wear OS smartwatch platform in 2014.

While the big picture idea that smartwatches should provide you contextual information and insights into your health have remained the same, how that looks, and how much you’ll be fiddling with the tiny screen strapped to your wrist, has shrunk dramatically.

Buy a Samsung Galaxy Watch 5 or an Apple Watch Series 8 and the experience is largely the same across platforms. Your smartwatch can show you notifications, track fitness, check your vitals, and occasionally offer access to a smart assistant that might answer questions. For the Pixel Watch, Google’s first smartwatch, arriving nearly a decade after the company introduced the Wear OS platform (née Android Wear), the tech giant is sticking to the basics. The Pixel Watch is Google's first smartwatch with built-in Fitbit tracking since the wearable company was acquired in 2019, but the initial integration is solid, if not barebones.

Google's official take on a smartwatch runs Wear OS, features a round, teardrop display, and has deep integration with Fitbit for fitness tracking.

The Pixel Watch is in many ways the nicest Fitbit money can buy. It has a round, water droplet-esque display covered in Gorilla Glass 5 that sits on a recycled stainless steel body. There are interchangeable straps in a variety of styles — from woven fabric to metal mesh — that slot into hidden lugs along the side of the smartwatch. And there’s a small crown and a side button above it for navigation. It feels both smaller than most popular smartwatches and a bit more premium. The Pixel Watch is more like jewelry than any aluminum Apple Watch I’ve ever owned and nearly as elegant as a stainless steel Apple Watch (according to my colleague Ray), even if it's lighter and less substantial on the wrist. It’s worth noting: Google’s band system is finicky; taking off a band requires you to press down a button and rotate the smartwatch, but otherwise, the hardware is a success in my book.

Google's smartwatch also has respectable battery life. The Pixel Watch has an estimated 24 hours of battery and that bore out in my testing, even with the always-on display turned on and a 30-minute workout thrown in. It will likely be shorter with longer workouts and more GPS (and LTE time if you get the cellular version), but for the casual athlete or office drone, it’s more than enough to get through the day and then some.

In comparison, Fitbit’s own trackers and smartwatches such as the Versa 4 and Sense 2, while unique and charming in their own way, don’t hold a candle to the Pixel Watch. This is good because the Pixel Watch offers enough of Fitbit’s health and fitness features that you probably won’t even need to consider a dedicated fitness tracker except for extreme sports edge cases.

The Pixel Watch covers all of the basics like activity tracking, heart rate monitoring, and measuring blood oxygen levels. You can also track your sleep and use the smartwatch’s built-in ECG app, too. As someone who’s used both Galaxy Watches and the Apple Watch, all of these functions worked as I expected. It was easy to jump from a complication on my watch face into the Fitbit Exercise app to start a run (though there’s currently no automatic workout detection) after work or pull up the Fitbit Today app while eating breakfast to see how poorly I slept the previous night.

Health and fitness features are managed in the Fitbit app, and come with an optional Fitbit Premium subscription for more in-depth information on your sleep, heart health, and recovery after a workout, along with video exercise classes you can watch. The most interesting of these features is probably the Daily Readiness Score, which is how Fitbit quantifies how recovered you are from the previous day’s activities. You need to wear the smartwatch for four days before Fitbit can start telling you anything useful, but when so few services actually care about how you feel after you exercise, it’s definitely worth trying out.

The experience of actually tracking a workout on the Pixel Watch is streamlined, displaying the time, your heart rate, how many calories you’ve burned, and your current heart rate zone. More information is available after you complete a workout, and in the Fitbit app too, but otherwise the experience is very hands-off. The smartwatches from Apple and Samsung are like this too — they assume you know how you should be working out — but it seems to me like there’s an opportunity to be a bit more proactive and direct users more in future versions.

But if I have any complaints about the Fitbit parts of the Pixel Watch, it’s that they require creating an additional account and downloading an additional app. If Google is serious about this smartwatch and serious about Fitbit integration, it should do more to unify things. The Fitbit app should just come pre-installed on all Pixel phones and you should be able to use your Google account.

Of course, a Fitbit is not all the Pixel Watch is. This is a Wear OS smartwatch, and the first to feature Google’s “Pixel” perspective on its own smartwatch operating system. The Pixel Watch is different enough from Samsung’s Galaxy Watches that you might not immediately assume both are running Wear OS — but they still share similar, unavoidably Wear OS elements.

Turning on the smartwatch by tapping the always-on screen or pressing the crown or side button shows you the watch face. You can long press to customize it, swipe up to see notifications, swipe down to access quick settings, or swipe right or left to move through “tile” screens (a.k.a. bits of live information from Wear OS apps) that you can access without launching an app. On the Pixel Watch, that could be your heart rate, how many hours you slept last night, the current weather, etc.

Google’s presentation of Wear OS 3.5 is very elegant, relying on pops of color and clever animations to hide the Pixel Watch's small display and thick bezel. The bezel becomes more visible in direct sunlight outdoors, but it never really bothered me and I never felt this skin of Wear OS was keeping me from seeing vital information. The rest of the software experience is surprisingly limited. Google ported over important services and apps like Google Wallet, Google Maps, and Google Home — they’re handy to have and worked well in my experience — but there isn’t a big idea to the Pixel Watch’s Wear OS features that goes beyond “it’s nice and doesn’t have any issues.” Maybe that’s for the best, but I was surprised there wasn’t more going on!

Ultimately, other than its superior looks — I think round smartwatches look better than rectangular ones — the Pixel Watch is a lot like the Apple Watch. Even the interactions are similar. If you press the Pixel Watch’s side button, it pulls up a list of recently used apps; press in the crown and it shows your app list; and the haptic feedback is pleasant when you turn the crown.

Similarities extend beyond physical interaction into the general ambition of both devices. Apple might be getting ready to make the Apple Watch Ultra a more independent device, but as it stands, both the Apple Watch and Pixel Watch are really team players. Google finally has an ecosystem of devices that work better together, and the Pixel Watch is just one of them.

Google did it. The Pixel Watch is a great first smartwatch.

Unlike the Pixel 7 or 7 Pro, if you’ve got the money and you’re using Android, there’s really no reason not to try the Pixel Watch. The Galaxy Watch might do more and there might be more watchOS apps in Apple’s App Store, but ask yourself, how often are you using anything beyond the basics Google covered? For me personally, not that often. When it comes down to it, the Pixel Watch is a beautiful piece of hardware, capable of enough fitness features to satisfy the amateur, with Google Assistant on call, and a starting price of $349 (the cellular version with 4G LTE costs $399) that’s pretty hard to beat.

Google did it. The Pixel Watch is a great first smartwatch. Now it just needs to figure out how to sell it.