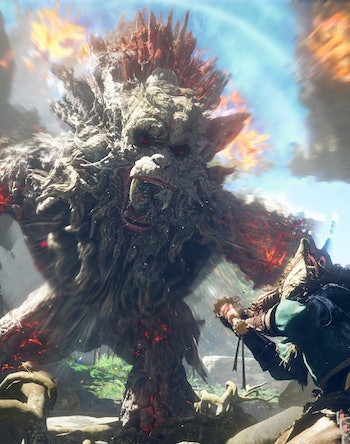 In 2017 Koei Tecmo released Nioh, bringing one of the most unique takes on the Soulslike genre we’ve seen.

Now, it feels like the studio is doing the exact same thing with Wild Hearts and the genre that Monster Hunter popularized.

Wild Hearts is the product of a strange partnership between EA and Koei Tecmo, and after getting a few hours of hands-on time with the game, it’s clear both companies are fully committed to bringing something fresh and unique to the hunting genre.

If you’ve played a Monster Hunter game you’ll immediately be familiar with the basics of Wild Hearts. The core gameplay loop involves hunting giant monsters, called Kemono, and using the supplies you gain from that to craft new weapons and armor, thereby letting you hunt stronger monsters. The demo I played gave access to roughly the first 3-4 hours of the game, walking through early story beats, tutorials, and the first three major Kemono.

Just like Nioh, Wild Hearts gameplay unfolds at a snappy pace, and there’s a big emphasis on traversal. While you have a jump button, your character will automatically vault over things like logs and rocks. There’s a distinct verticality to a lot of the environments, and you can grip and climb up cliff walls and some other objects. To balance the experience, you do have a stamina gauge that depletes over time. In some cases you can also jump onto monsters and climb up them, using a powerful attack on a weak point to cause huge damage and stagger the creature.

Where Wild Hearts gets really fascinating is with its robust crafting system, using an ancient device called Karakuri. This mystical tool lets you instantly conjure items, both in and out of combat. Think something like the Runes system from Breath of the Wild but in a hunting game format.

The Karakuri gives a wildly dynamic edge to combat, letting you conjure boxes that you can stack, climb up, and use to launch yourself into a devastating aerial attack. There’s also a springboard you can use to avoid enemy attacks, move quickly through the environment, or launch into a combo. Near the end of the demo, I also unlocked a torch that I could run through for a fiery slash attack that also lit my weapon, letting me cause extra damage. Even further, you can actually build additional devices based on how you stack the boxes or other Karakuri items you build. For example, building a three-by-three grid let me erect a barrier that could stop a charging Kemono in its tracks.

In order to use the Karakuri, you need to gather “Karakuri Threads,” which can easily be gathered off of items in the environment or enemies. On top of combat items, you also unlock a wide array of camp items that can be crafted, like a forge to create new equipment, a campfire to cook meals, or a rope caster that can create zipline shortcuts. Across the map, you can find “Dragon Pits” that can be improved using resources, in turn letting you place more crafting items.

What’s really interesting is that all the Karakuri items you place are persistent, and won’t reset when you travel back to camp or anything. This means you can reliably establish shortcuts, or put up helpful items like signs to help guide yourself. This also means that things like boxes and springs will still be there, continuing to give you more traversal options during combat. In a way, the whole system feels vaguely reminiscent of the building options in Death Stranding.

Interestingly, there seems to be an even wide array of uses for Karakuri, as during roundtable Q&A Lewis Harvey, Executive Producer of EA Originals, mentioned there’s a paddle scoop Karakuri that you can put in the water, which will automatically collect fish and other resources you can collect later. Other Karakuri can also be used to “mature and cook” your ingredients back at camp.

While the Karakuri is by far the most interesting thing Wild Hearts is doing, there are plenty of other aspects to dig into as well. Like Monster Hunter, you have a variety of weapons to choose from that all have different combos, skills, strengths, etc. The demo gave me access to a katana, a massive two-handed sword, a bow, a giant hammer, and an interesting bladed umbrella weapon. Each weapon has light attacks, heavy attacks, and special attacks that can combo together, but the Karakuri also ties in here. For example, the katana has a gauge that fills as you cause damage, and once full you can use “Karakuri Unleashed,” which drastically increases your range and damage as you enhance your katana.

There’s a big “nature” theme to the different Kemono in Wild Hearts, as the three major beasts I battled were integrated with plants that also played into their special attacks. The giant boar-like Kemono could make vines shoot up from the Earth, while another one could spit sap that would cover my character and slow me down. The three Kemono in the demo all felt incredibly varied, and hopefully, the full game can keep up that kind of variety. At the same time, EA indicated that different Kemono can run into each other and interact in some interesting ways.

The build I played is obviously early on, and the experience was definitely rough around the edges in terms of graphical fidelity and assets. That being said, the feudal Japan-inspired setting is already working wonders, and the world of Wild Hearts looks gorgeous. Fighting a Kemono in a giant field of flowers or forest of bamboo feels fitting, especially when the creature can tear through the forest and send debris flying every way.

Wild Hearts has made an incredibly strong first impression, and I’m honestly blown away by how unique the entire Karakuri system feels. It’s an excitingly experimental system that already seems like it’s going to provide a wealth of options. Being able to craft and place objects in the middle of battle can feel a bit messy at times, but it also provides a new dimension to hunting games that I hadn’t even thought of before. The hunting genre can be a tough sell for anyone not already invested, but Wild Hearts might just be different enough to attract a new wave of players.