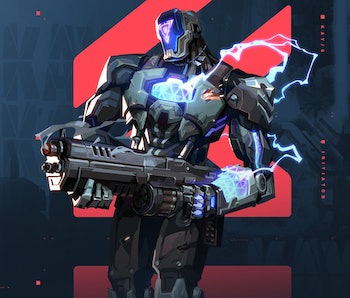 Just over one year after its initial 1.0 launch, we’re getting a brand new Episode and Act that introduces a new robotic agent, battlepass, and an event and special bundle to celebrate the game’s anniversary.

If you’ve created some fond memories while playing Valorant over the past year and want to know what’s next, this is everything that Riot Games has revealed about Valorant Episode 3, Act 1!

When is the Valorant Episode 3, Act 1 release date and time?

Riot Games has confirmed that Valorant Episode 3 Act 1 will begin on June 22, 2021. When that date rolls around, you’ll want to update Valorant. Once you do that, you can log on and have access to the new agent, battlepass, and balance updates that come with the new season. With Episode 2 Act 3, the update rolled out around 5 p.m. Eastern time. It’s unclear when specifically this update will roll out, but be on the lookout throughout the day for the update — or more info via the official Valorant Twitter account.

Episode 3, Act 1 will run until August 24, 2021, so this Act will entertain you throughout this summer.

Who is the Valorant Episode 3, Act 1 new agent, KAY/O?

Valorant Episode 3, Act 1 introduce KAY/O, a new robot agent. KAY/O is a robot created to neutralize Radiants by suppressing his opponents abilities. ZERO/Point throws a knife that will stick to any surface before exploding and disabling other agent’s abilities. FLASH/drive is a grenade that quickly explodes and blinds other players.

FRAG/ment is damage-focused grenade that deals more damage the closer an agent is to its center. Finally, KAY/O’s ultimate is NULL/cmd, which emits a pulse that surpresses any enemy agents caught within it. If he’s killed while this is active, KAY/O will actually just be downed and can be revived by teammates.

KAY/O was actually the first new Valorant agent that Riot started working on after the game’s launch in June 2020, so Riot wanted this character to be a “back to basics” type of agent that would appeal to fans of other FPS games.

“An aspiration we have for KAY/O is that FPS players could take some of the common mastery they have acquired from other games, like throwing grenades, and apply them in an intuitive way to access the outputs of KAY/O’s kit,” Game Designer Ryuan Cousart explains. “I wanted KAY/O players to really think of the map and be able to see geo and make decisions based off of it.”

What is in the Valorant Episode 3, Act 1 battlepass?

Like every other Act of Valorant, Episode 3, Act 1 features a new Battlepass that costs 1,000 VP and will net players new customizable items. Even if you don’t pay, you’ll get the Jigsaw Ghost, Greatly Increased? Spray, Greatly Decreased? Spray, The Key to Ancient Mysterious Buddy, and nobirds Card for free. Those that pay can also get the following items: K/TAC Vandal

“For this pass, we wanted it to feel very much like a reflection on the past because it’s been one year since the game launched,” Senior Producer Preeti Khanolkar explains. “That’s why we created the K/TAC and Jigsaw gun skins as callbacks to our lore and agents.”

This anniversary theme will be felt elsewhere during Episode 3, Act 1 thanks to a special event pass and bundle.

What is the Valorant Year 1 Event Pass and Give Back Bundle?

Valorant turned 1 earlier in June, and an event to celebrate that is kicking off when Episode 3, Act 1 launches on June 22. Between June 22 and July 6, players can actually work to complete a free Event Pass. It contains the Year One Gun Buddy and Card, Ep 3 Reflection Card, YR1 and Yeaer One titles, and 20 Radianite Points.

Players can also gain bonus XP by playing in parties of 2 or more. If you’re playing with a full party of 5, you can get 20 percent more XP per match.

Riot Games is also celebrating their anniversary by selling the “Give Back Bundle” for 6,382 VP. It’s quite expensive, but all proceeds go to the Riot Impact Fund that Riot Games does also run. Valorant players voted on what items they would like to see, and the following made the final cut alongside some Give Back themed items.

Whether you want to spend money or not, Riot Games is doing a lot to celebrate the first anniversary of Valorant. The game has already amassed over 14 million players on PC and a mobile version is in development, so don’t expect the multiplayer shooter to go away anytime soon.