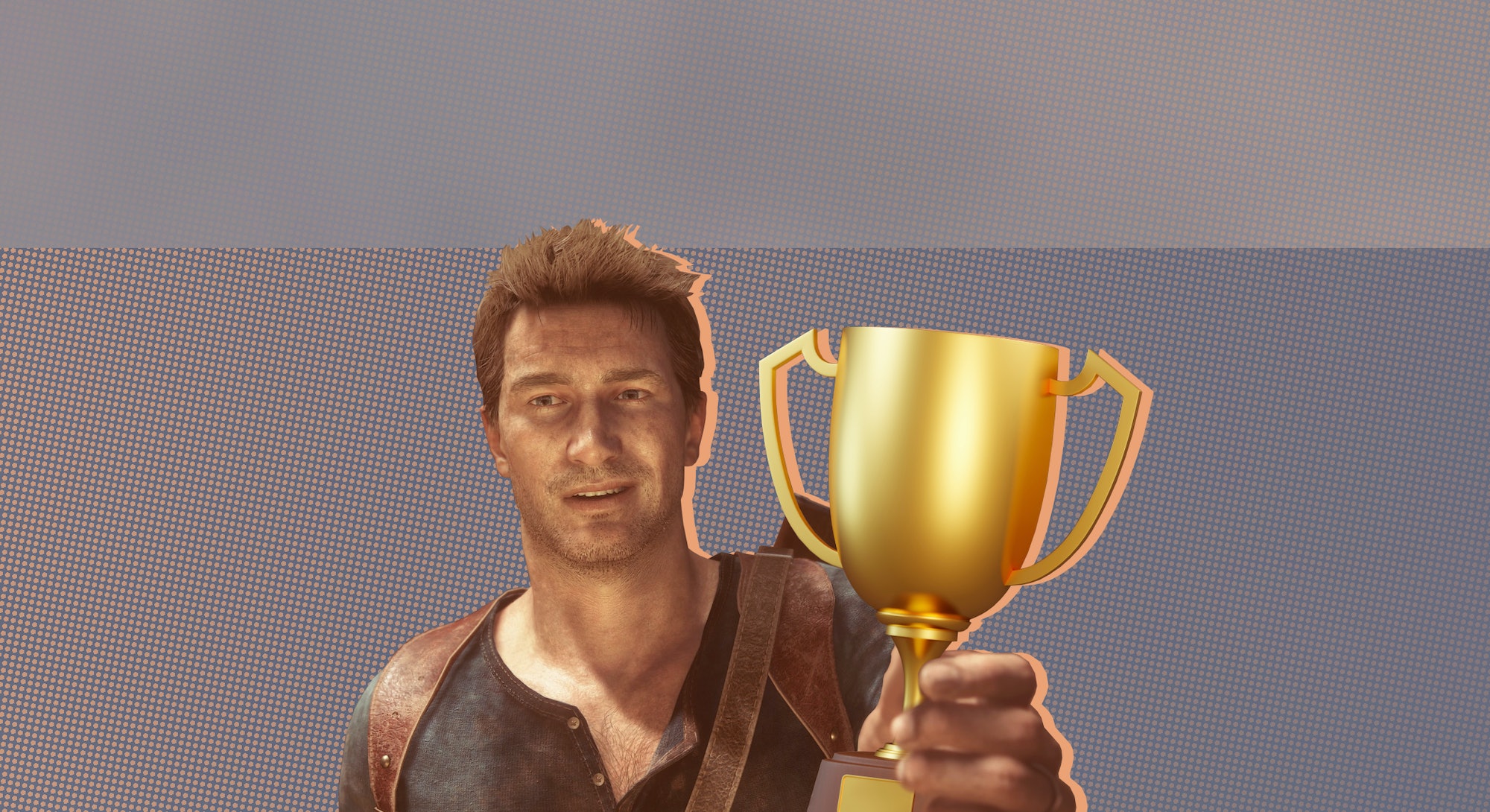 For some players, simply watching the credits roll on a video game isn’t enough.

Some opt to chase trophies, which serve as digital proof of their in-game accomplishments. There usually aren’t tangible rewards associated with earning trophies. But that hasn’t stopped many players, like Twitch streamer Jakob VanDeusen, from pursuing them.

“Nothing hits harder than popping a Platinum trophy,” he tells Inverse. “It's a huge drop of serotonin and it means I had a worthwhile experience with a game.”

Trophies debuted on the PlayStation 3 back in 2008, closely resembling Xbox 360 achievements. They’re evolutions of those high-score lists on arcade classics like Ms. Pac-Man or Galaga. But while your achievements in Donkey Kong were only visible at your local arcade, these virtual trophies are enshrined forever online.

“Nothing hits harder than popping a Platinum trophy.”

The Platinum trophy is the most coveted, only being awarded after earning all other base trophies first, consisting of Bronze, Silver, and Gold. Many straightforward achievements are unlocked simply by progressing through the game, but the rarer accolades require deep dives into optional modes or especially challenging scenarios that many players never touch.

The motivations behind trophy hunting are more personal and idiosyncratic than mere bragging rights — even chill, story-based games like Life is Strange offer a robust suite of trophies to claim. Developers often use trophies to keep players engaged longer, or to offer a blistering challenge to a hardcore few.

Inverse spoke with seven trophy hunters to learn more about what drives them to complete the toughest tasks in gaming. For these players, the experience of trophy hunting can make or break a gaming experience. Some find the thrill of completing every morsel of content exhilarating. Others say a daunting list of tasks will cause them to opt-out of certain games entirely.

Exhilaration and mastery are the biggest motivators for trophy hunting. Many gamers see trophies as an incentive to step outside their comfort zones, learning new strategies and mechanics they may have otherwise avoided.

That’s the case for freelance journalist Alex McCumbers, who says achievements like “pulling stunts in Brutal Legend and earning 10,000 kills online in Gears of War,” are far more memorable than simply beating a final boss and completing the story.

The gratification that comes with improving one’s skills is equally important. For podcaster Max Roberts and avid gaming completionist Niki (who did not wish to share her last name), trophy hunting is about mastering something that once felt impossible.

“Good trophies feel just out of reach, but obtainable with good practice,” says Roberts. “When I truly love a game, it becomes more enticing to chase the Platinum to keep the experience going.”

“Trophies encourage me to attempt challenges I probably wouldn’t have considered otherwise, like playing on harder difficulties,” Niki adds.

Trophies also add to a game’s value, as a handful of players explained to Inverse. If you only buy a few games per year, trophy-hunting can be a satisfying way to get your money’s worth. But fun isn’t always a top priority. Podcaster Anthony Ragucci says he replayed Rise of the Tomb Raider and Shadow of the Tomb Raider to 100 percent completion twice due to bugged side missions across each game.

Even devoted completionists say an overly grueling process to earn a Platinum can sour their enjoyment of a game. Some have skipped games completely due to what they saw on the trophy list — even if it’s a game they’d probably enjoy.

After too many frustrating experiences, Darren McCarthy now scopes out a game’s trophy list before buying it.

“I won’t buy or start a game unless I’m confident I’ll have the Platinum trophy by the end,” he says. “Obviously, this has made me pass over a few games, but that’s my loss and I accept that.”

“Trophies have tainted Hades for me.”

Similarly, Ragucci says going back to clean up trophies can lead to “existential dread.” He recalls the “Mein Leben” trophy from Wolfenstein II: The New Colossus as being particularly unpleasant, as it involves completing the game on the hardest difficulty with permadeath enabled. According to PSN Profiles, fewer than 0.1 percent of players have earned.

“It may take a lot of time and effort but I'm going to do it,” Ragucci says.

Niki has had similar experiences, citing the “Flapmaster” trophy from Goat Simulator as being particularly troublesome. To earn it, you need to accrue 10 points in Flappy Goat, an in-game Flappy Bird clone that Niki calls “insanely difficult and annoying.”

The trophy is so tough to get that YouTuber BushidoCypher would charge $10 to log into players’ accounts to earn it for them. Niki compares some trophy-hunting experiences to collective “war stories” that let communities commiserate about the grueling tasks involved with chasing Platinums.

2020’s indie darling Hades also has several particularly obnoxious trophies that have been thorns in the sides of aspiring completionists.

“Trophies have tainted Hades for me,” Roberts says. “I have all but two trophies tied to the same event: Achilles’ Chthonic Companion. After 50 hours and no progression in that storyline, I had to give up.”

Players also expressed disdain for online multiplayer trophies, which can often feel more arbitrary and gimmicky than challenging. For instance, the “Slow on the Draw” trophy in Red Dead Redemption requires players to earn 10 assists online in a single match – most easily achieved by intentionally shooting opponents in non-critical areas such as the leg. This can wind up feeling like griefing to the rest of the squad.

While no trophy list can appease everyone, there are some general best practices.

One major source of frustration is missable trophies, which can only be obtained within a limited section or level. Essentially, trophy hunters are often faced with the choice to either read spoilers before playing or risk having to play a second time to get the trophy they missed.

“The best trophy lists align with natural gameplay progression, encourage experimentation, exploration, reward skill, and highlight special moments,” Niki says. “They make you want to experience everything in the game and unlock them all.”

She praises recent first-party PlayStation games for this, saying Sony has “mastered the art of an enjoyable, accessible [trophy] list.” Ghost of Tsushima, Ratchet & Clank: Rift Apart, Marvel’s Spider-Man: Miles Morales, and Horizon Forbidden West all stand out as examples of games that do it right.

Ragucci points to the Horizon Forbidden West trophy list as one with a glaring flaw. It only requires you to find some of the game’s collectibles, instead of all. “It doesn't really make a lot of sense of why you'd do that over just getting them all,” Ragucci says. “I left some things incomplete, and I ultimately didn't care because I didn't need to do them for a trophy.”

Nearly every player Inverse spoke with said they’d prefer for trophies to be at least mildly challenging. “Easy trophies are fine, but I do think that more meaningful challenge-oriented achievements are way more interesting,” McCumbers says.

As Niki says, there’s an “art” to a good trophy list, often straddling the line of challenging enough to make it satisfying without feeling impossible.

The process of earning the Platinum trophy in Road Bustle takes all of five minutes.

Some developers take notice of passionate trophy hunters and create games with the sole purpose of inflating players’ Platinum counts. These games are often laughably simple and can earn you a Platinum trophy in minutes.

They often cost only a few dollars at most, offering a quick fix for desperate and hungry trophy hunters. My Name is Mayo (and its sequels), Road Bustle, and pretty much everything from publisher Ratalaika fits this category.

Whether or not these games are viable, however, is a major source of contention among hunters. Do you have a sense of honor and pride or not?

“If you buy My Name is Mayo for $1 and you get an hour of enjoyment and pop a few trophies along the way, I'd say it's worth it,” VanDeusen says.

“I personally look at specifically which Platinums people have rather than just how many because there is a definite unspoken value to trophies,” Niki says.

“Everyone will respect and recognize an Elden Ring Platinum over a 15-minute Ratalaika Platinum,” Niki says. “If it were up to me, I’d get rid of all those shit 10-minute Platinum games because I feel they’re against the spirit of trophy hunting to encourage people to buy and play shit games they don’t enjoy just for an easy Platinum.”

It’s easy to imagine why Niki feels this way when so many games out there require a Herculean amount of effort for a Platinum trophy. To Platinum Street Fighter V, you basically have to be a pro. To do the same in Hollow Knight, you have to defeat 42 bosses back-to-back in the Godmaster DLC ... without dying.

How does that compare to somebody willing to smash a single button 10,000 for the My Name is Mayo Platinum?

“Personally, I consider it cheating the system and don’t agree with it,” McCarthy says, arguing that such “non-games” have “ruined trophy hunting.”

Valor, it would seem, is alive and well in the field of trophy hunting.

Correction: A previous version of this article mistakenly said that trophies were added to PlayStation 3 in 2007 when it was, in fact, 2008.