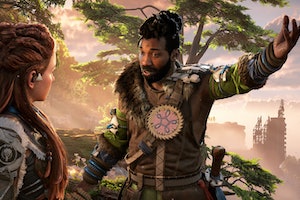 Horizon Forbidden West might be one of the most complex games of 2022, and that means there are many opportunities for seriously important concepts to get swept under the rug as you chart your course through the campaign. Beyond the game’s seemingly never-ending list of tutorials, here are eight tips beginners should keep in mind as you battle some truly vicious beasts.

8. Quick Save versus Manual Save

The sequel makes it very clear that Horizon Forbidden West features the same campfire-based save system used in Horizon Zero Dawn, but it doesn’t fully explain the list of options once you get there. You’ll see the option to use a Quick Save or a Manual Save, but what does each one do?

In simple terms, the Quick Save is essentially an instant overwrite of a single save slot that Forbidden West uses by default to save the game. This one save will function fine for most folks, but true RPG fanatics who like to set up multiple saves during pivotal plot moments should use the Manual Save option instead. It allows you to create multiple save points and overwrite the ones you no longer need. The Quick Save, on the other hand, will just keep on rolling.

7. Keep an eye on your medicine pouch

The virtues of medicinal berries are one of the first tips you learn in Horizon Forbidden West, so it’s easy to disregard them once you get deeper into the machine-smashing gameplay loop. Keep an eye on that X/14 that’s visible on the left-hand side of the UI, as that tells you how many health recharges you have left. Before entering any combat situation, do your best to ensure you’re completely maxed out.

To find more berries, look for the areas with tall, red grass. Typically any area with machines will have a few berries to keep you somewhat supplied, but you shouldn’t get in the habit of relying on the environment in front of you for health all the time. Otherwise, you’ll end up stranded like me and be forced to sprint for your Stash in fear of your life. Check your berry count when traveling between missions. I never let mine get below 10 after making that initial mistake, and that kept me alive through most of the game.

This may sound a bit elementary, but there are definitely a few similar quest design patterns in Forbidden West. One mainstay that crops up time and time again is Aloy being forced to find an alternate entrance to an area that’s otherwise inaccessible. If you ever get stuck on any puzzles of this nature, our best tip is to remember to look up.

There are lots of mechanics in this game that leverage verticality including the Pullcaster, grapple points, and vents in high-up places. Turn on your Focus and take a gander at the sky to see if you notice anything. Chances are you’ll find a highlighted piece of equipment that was out of your immediate field of view.

5. The Warrior and Survivor trees are good

In the days and weeks after launch, you’ll likely see lots of coverage about the bow mechanics of Forbidden West, but its developers at Guerilla Games spent lots of time improving Aloy’s melee skills too. To take full advantage of those enhancements, we’d advise taking a second look at the Warrior and Survivor skill trees to ensure your character fights like a beast from up close.

The Warrior tree offers exclusive combos, higher damage output from your staff with each hit, and increased damage while performing Critical Strikes after a machine gets knocked down. Being a good Warrior also has benefits for the bow as well, as it improves Resonator Boosts. These are special combos in which you charge up enemies through melee attacks and then finish them off with a single bow shot. It’s a highly versatile maneuver. If you’re fighting at a reduced range, it also helps to have a fast recovery, access to more recovery items, and better health performance during critical moments. The Survivor tree offers all that and more.

4. Valor Surges are awesome and important

One of the most important new combat mechanics in Horizon Forbidden West is the Valor Surge. These are special abilities accessed by unlocking clusters of connected skills on the game’s six skill trees. Each tree has multiple Valor Surges tuned to the chosen playstyle, but you can only have one equipped at a time.

The Valor Surge we found most helpful is called Toughened, and it’s on the Survivor skill tree. Level it up to its maximum potential, and you’ll essentially have unlimited health for several minutes during critical battles of your choosing. Its effects typically lasted through most of the toughest boss fights in the game. Work toward unlocking this if you’re struggling.

3. Some accessibility features are great for everyone

This game has a whole bunch of awesome accessibility features, but they’re not just good for those playing the game with a disability. Quite a few of them offer quality-of-life enhancements that could arguably make your experience better. We liked having “climbing notations always on” as a more seamless alternative to constantly equipping your Focus through every phase of an adventure. And then, of course, there are the obvious benefits to auto sprinting, increased slowdown while scrolling through the weapon wheel, and keeping mounts glued to the road.

Not every accessibility setting has to be about making the game easier. If you want a brutally difficult experience, you should also mess around with the player damage and enemy health sliders included with the custom difficulty setting. This allows you to tailor the game’s difficulty to whatever feels most acceptable to you. Points on the scale between very easy and insanely hard are yours to exploit.

2. Camps and side quests level you up fast

We went through most of Forbidden West feeling sufficiently over-leveled, but that fate won’t be the same for everyone. The game offers suggested levels for most of its activities, and, for the most part, they’re pretty accurate. If you’re several levels below the recommended threshold, you’re likely to be thrashed by what’s ahead.

When trying to level up your Aloy, our best suggestion is to focus on Rebel Camps and Rebel Outposts, marked by a skull on your map, or the orange exclamation points that denote side quests. The camps are quicker to polish off and are generally more consistent in their payouts. But there are quite a few side quests, particularly ones tied to the campaign’s main characters, that offer an absolutely enormous XP boost when finished. To make sure a certain task is worth your time, you can see its completion reward in your quest log.

Especially if you’re playing through Forbidden West on a high difficulty level, knowing the elemental weaknesses of your target becomes paramount. Certain types of ammo are more effective against nearly every machine you face, so it helps to know precisely how that impact breaks down.

To find out, swipe the touchpad after scanning an enemy to see this screen. When fighting against this Fireclaw, it’s a good idea to use Frost ammo. If you’re shooting it with fire ammo instead, you’re only helping its cause. Every weapon in your arsenal has elemental properties to consider as you plan your strategy.

More like this
Gaming
Jan. 25, 2023
Redfall is Bethesda’s vampire-infested co-op shooter — what to know
By Jess Reyes
Gaming
Jan. 24, 2023
Where to go first in Forspoken: 3 locations for the early game
By Hayes Madsen
Gaming
19 hours ago
MLB The Show 23 Release Date, Cover Athletes, Platforms, and Pre-Orders Explained
By Joseph Yaden
LEARN SOMETHING NEW EVERY DAY.
Related Tags
Share: