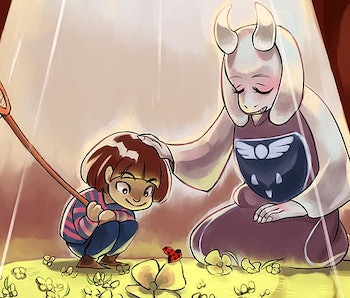 Kazuya Mishima just joined Smash Bros. Ultimate as its penultimate addition. It’s great that another popular character has joined Smash, but this seems to be more than a single new reveal. The addition of Kazuya might’ve inadvertently provided all the clues we need to ascertain the final character being added as part of Fighters Pass 2.

If this Twitter theory is correct, the final fighter is Frisk from Undertale. Here’s the evidence.

Clue #1- Sans from Undertale received a skin and a track

Even if you’ve never touched Undertale, you’ve likely heard the song “Megalovania.” If not that, you’ve definitely had the visage of the skeletal boss, Sans, grace your eyeballs. “Megalovania” and Sans are certainly the two most popular pieces of media to emerge from Undertale.

Smash Ultimate added Sans as a Mii Fighter costume during DLC round 3. Being the first Undertale representative, it’s odd they didn’t pick the lead character, Frisk as a skin ... or is it?

Smash Ultimate previously added Heihachi Mishima from Tekken as the first acknowledgment of that series. Similar to Sans, Heihachi is arguably the most popular Tekken character.

Flash-forward a few months later, and voila, Tekken’s protagonist Kazuya Mishima is announced as an addition. A side character becoming a Mii Fighter skin could be a precursor to a main character being added.

Additionally, Sans came with the “Megalovania” track. He was the first Mii Fighter skin to come with a music track. Cuphead from Cuphead would be the second, as he came with a rendition of “Floral Fury.”

Getting a track is a big deal. Shortly after Cuphead’s Mii Fighter skin joined the game, Smash Ultimate hosted a Spirit Board event to mark the occasion. You could collect items in-game that were based on characters from Cuphead. Despite giving Sans such a remarkable entrance, he didn’t get an event. Perhaps it’s because Undertale spirits will be added with Frisk later on?

Heihachi also lacked any Tekken spirits, which will soon be remedied with Kazuya’s addition.

With the addition of Fighter Pass 2, six voice tracks were added to Smash Ultimate:

That final slot is currently unknown. Steve and Alex don’t have any voice acting, so the sixth slot will be occupied by one of the final two fighters. Kazuya is quite chatty in his source material. We can assume that he’ll get the final voice track, meaning the last character is silent.

There aren’t many silent characters around. Goku, Shrek, and Sora would certainly chat your ear off. Frisk is the perfect fit to fill that slot.

Clue #3 – Undertale has an anniversary in September

Using our good pal, math, we can deduce that new Smash Bros. characters release approximately every three to four months. Three months from now, it’s going to be September. Undertale was originally released on September 14, 2015. Let’s imagine that event for a second.

We’ll likely have a new chapter of Deltarune announced somewhere around then. Creator Toby Fox previously implied there would be an addition to Deltarune in 2021. Following the announcement, Fox might bring up that there will be another way to enjoy Undertale in the near future, announcing Frisk for Smash.

This would be a great way to get new eyes to Undertale and get people excited for Deltrarune.

In 2019, the anniversary month was used to announce Sans as a skin.

When announcing Sans for Smash Ultimate, the game’s director, Masahiro Sakurai discussed that Fox came over to his house to brawl in Ultimate. As cool as it would be to imagine the two developers as chums that united for their love of the fight, these two developers are busy people.

Did they really come together for just a Mii Fighter Skin? Perhaps there’s something larger at play such as Frisk joining Smash?

It seems like all the clues are coming together for Frisk being the final fighter in Smash Ultimate. But we should find out for sure in just a few months.