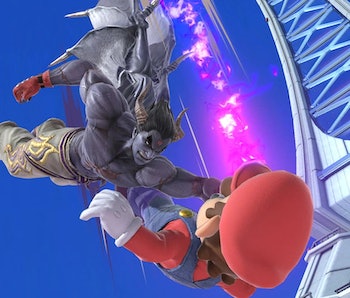 Super Smash Bros. Ultimate kicked off Ninendo’s E3 2021 presentation, and the leading fighter of the show was far from what fans expected. Kazuya Mishima from Tekken will officially be the next challenger to join the roster, and it looks like he’ll operate differently from any other fighter we’ve seen yet.

Below, we detail the latest news with regard to Kazuya’s release date, full moveset, and more.

Kazuya Mishima will be available June 29, 2021 for $5.99 as a standalone purchase or included with the Fighters Pass Vol. 2.

The main draw for Kazuya’s inclusion in Super Smash Bros. Ultimate is that this is essentially the first time a character with a more traditional fighting game moveset will be playable within Nintendo’s unique fighting game. While other similar icons like Street Fighter’s Ryu and King of Fighters’ Terry Bogard exist in Smash Ultimate, their base of attacks was reduced to match all other fighters on the roster.

That’s in contrast to Terry, for example, who has similar variations on tilt, attack, and smash like every other fighter, Kazuya features nearly three dozen moves ripped straight from the character’s Tekken 7 command list. Terry and Ryu can perform their most iconic attacks in Smash, but this mirroring of Kazuya appears far more granular.

Ironically, this detailed approach defies Sakurai’s mindset on Smash development as of 2013.

“The biggest feature we look at in Smash Bros. is, ‘What does this character bring to Smash Bros. that other characters don’t?’” Sakurai said in a GamesTM interview nearly eight years ago. “If you look at … someone from a fighting game already, and people like fighting with this character, from my point of view, it’s like ‘This guy does what this guy already does. He fills the role that this character already has. So while you may like this character and he’s interesting, that doesn’t really merge well here.” So, Sakurai has responded by adding Kazuya in a role that’s somewhat similar to the one he currently occupies in his original series.

True to Kazuya’s devilish ways, he also has the ability to transform into a Devil for certain moves as well, such as the iconic Air Inferno. This change will likely further complicate Kazuya’s fighting possibilities.

Kazuya’s moves were a big feature of the character’s E3 showcase, and now we have specific details about all of them.

Neutral (B): Devil Blaster: Fires a fast beam instantly that can pass through multiple opponents. Its power decreases over time. The blast can be aimed in several directions and reflected.

Side (Left/Right+B): Devil Fist: A fast punch that rushes forward and through opponents. The closer they are, the more knockback there is. You can punch through close opponents. It can also be used for recovery.

Up: (Up+B) Devil Wings: Allows you to ascend in combination with jumps. You can move left or right once the jump peaks. It can also be used to KO opponents by shooting them upward.

Down (Down+B) Heaven’s Door: Grab an opponent and throw them to the ground. Can be used to take opponents down with you. Players can resist it through inputs depending on how much damage they’ve taken.

When damage is 100%+ or Stamina is below 25%, Rage triggers and can be used once per Stock. Attack power is multiplied by 1.1x. There’s also a Rage Drive throw that can be used once per Stock that’s used as a grab or by doing Heaven’s Door. Rage state ends after using the move. It also ends if you take enough damage. It will also end soon after you miss a Rage Drive attack.

Final Blaster: It releases a volley of Devil Blaster attacks that fan out. It will fail if the first beam doesn’t hit.

Kazuya is great for comebacks, has high attack power, but has low range and is slow. He’s also heavy and has a low jump. Kazuya auto-faces opponents in 1:1 scenarios like other fighting game characters and has continuous Super Armor, but not as much as Bowser. He has very little hitstun.

Left stick has eight directions, but you still only use A.

These attacks are all input while crouching.

Kazuya will be bundled with the Mishima Dojo stage. It starts off fully enclosed, but its surroundings break through combat on all sides. It does not include any floating platforms.

This article was originally published on June 15, 2021