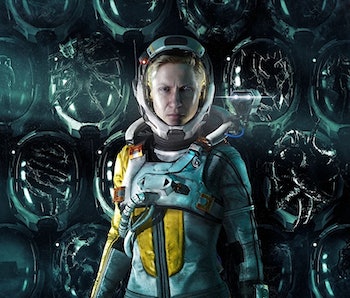 Getting to the end of Returnal is no easy task. The new PS5 action game is a tough-as-nails roguelite that can be brutally unforgiving. With no checkpoints or saves during runs, one bad power surge could send you back to square one. There’s a chance that most players never even make it to the final biome.

Those who do are in for a treat, though. Returnal tells a mystifying sci-fi story that doesn’t fully reveal itself until the end credits. If you think you have a sense of what’s happening on Atropos, the real story might be much darker and more psychological than you think. Here’s exactly what happens in Returnal’s ending and its secret ending.

Leading up to the ending, you’ll notice a lot of strange motifs throughout the game. There’s a mysterious astronaut, octopus-like creatures everywhere, and a normal car parked around the planet’s surface. Every little detail comes into play at the ending.

After defeating the final boss, Selene comes face to face with a giant sea creature and says “Are you the one who brought me here?” The game then jumps to a flashback on Earth of Selene (or someone who looks like her, at least) driving at night with her child in the backseat. Notably, Selene’s child is holding an octopus toy in the scene. The kid asks Selene “Mom, do you see the white shadow?” and then things get tragic.

Selene looks down to tune the radio and looks up in time to see an astronaut standing in the middle of the road. She swerves, sending the car off a bridge and underwater. Selene struggles to get her child out of the car, but is ripped away by some unseen force before she can. Roll credits on that harrowing image.

There are a few ways to interpret this, but here’s the psychological explanation: the entire game is Selene reliving that moment. It’s a game about trauma and a protagonist who can’t stop replaying a horrific event in her head. Everything starts to make sense when viewed through that lens. It’s why we see so many squids (a nod to her daughter’s toy) and why the final level takes place underwater. It even justifies the game’s roguelite Groundhogs Day premise: she’s constantly reliving the tragedy.

It’s hard to say if anything that happens on Atrops is literal or just metaphor. That part is up to interpretation. The bigger picture is much more personal.

The game’s secret ending is far more complicated. After meeting a few extra conditions, Selene eventually interacts with her car in the final area. The scene jumps to Selene coming face to face with an alien sitting in a wheelchair (which shows up in visions throughout the game). It attacks her and she shouts “I told you to leave me alone” as she fights it off. A human voice says “Selene” back to her and the scene changes again.

Now we’re in Selene’s first-person view watching the car crash from the perspective of the astronaut her car swerved to avoid. Then we cut back to Selene’s perspective in the car underwater. This time, she doesn’t struggle to save her daughter and no one pulls her away; she simply swims up to the surface as soon as she awakens. The screen goes black, she cries out “Helios” and that’s the ball game.

It’s harder to explain what’s happening here as it’s a little more abstract. What we can glean is that the monster in the wheelchair represents Selene’s strained relationship with her mother, adding another layer of psychology to the game’s seemingly alien world. There’s a theory here that the driver of the car could have been Selene’s mother, which paints the accident in a different light.

There’s a theory here that Selene entered some sort of time paradox that teleported her back to the site of the crash. In that case, Selene may actually be the astronaut who inadvertently sent a car careening off the bridge. Basically, you can either view this through a literal sci-fi lens or a strictly metaphorical one that takes place in her head. Take your pick; it’s going to ruin your day either way.

More like this
Gaming
Jan. 25, 2023
How that wild Forspoken ending sets up a potential sequel
By Hayes Madsen
Gaming
Jan. 13, 2023
Nintendo theory reveals a wild Kirby secret hidden in plain sight for decades
By Steven Asarch
Gaming
Jan. 24, 2023
The Last of Us Part 3 needs to steal a brilliant invention from the HBO show
By Willa Rowe
LEARN SOMETHING NEW EVERY DAY.
Related Tags
Share: