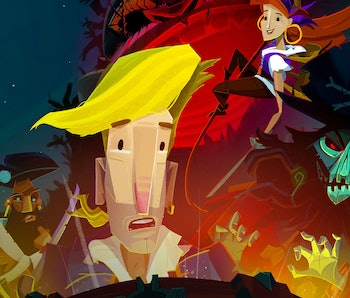 The nostalgia pendulum operates on a roughly 30-year cycle as topics drift out and back into the cultural consciousness. For a medium still in its relative youth, the current nostalgia pendulum in gaming swings back to the ‘90s, at the height of LucasArts’ popularity. Indie games in 2022 like Norco, Wayward Strand, and Perfect Tides retain the mechanical markings of classic adventure games while telling more philosophical stories in novel ways. But the newly released Return to Monkey Island goes even deeper to fully embrace ‘90s nostalgia to prove that era of gaming was worthwhile — even with rose-colored glasses removed.

You can (not) return

It has been a long time since Guybrush Threepwood was in a new Monkey Island video game: 23 years to be exact. Longer still is the time since franchise creators Ron Gilbert, Tim Schafer, and Dave Grossman have been involved in a Monkey Island project.

Return to Monkey Island is quite literally a multi-layered return in a number of ways.

Players are returning to a franchise that has lodged itself in their minds for over 30 years. Series creators Gilbert and Grossman led the project (Schafer is busy running Double Fine), marking this as a return to form for a series that has changed over the course of its several entries, oftentimes to the chagrin of fans. For protagonist Guybrush Threepwood, he is literally returning to Monkey Island ... again (he has returned several times in the series).

“You can’t go home again” is an adage from the Thomas Wolfe novel of the same name. It refers to the idea that you can never experience things as you did at some time in the past. As much as nostalgia might drive someone to return to something familiar, they are no longer the person that experienced home in the way that gives them nostalgia. In Return to Monkey Island, Gilbert and Grossman ask if any of us can truly ever return to Monkey Island. Can we recapture a moment of time in a way that it feels resonant all these years later?

At a time when so many seminal ‘90s entertainment properties are being forcibly exhumed from their graves by corporations looking to capitalize on nostalgia, leading to the original creators making metatextual projects about their own legacy, Return to Monkey Island is concerned with having fun. While metatextual jokes do exist in Return to Monkey Island, they are nothing new; That’s been a series hallmark since the first entry in 1990.

Instead of making some grand philosophical comment about nostalgia, Gilbert and Grossman got together and thought, “Hey! What if we just made a really good Monkey Island game?” That is exactly what they did.

Clearly, the franchise creators spent several decades evolving their craft. Their refinements to the franchise feel laser-focused in this new entry. LucasArts adventure games are notoriously complicated due to the SCUMM engine’s use of verb object combinations that drive the action. Return to Monkey Island is smooth as butter in its puzzle-based gameplay that doesn’t get in the way of the player with obtuse mechanics. For those who aren’t veterans of LucasArts adventure games, there is a hint system that slowly offers clues to the player in stages, letting you decide exactly how much help you need. In addition, a scrapbook available in the start menu familiarizes players with Guybrush Threepwood’s past adventures.

Return to Monkey Island tells a story that simply lets players enjoy the iconic comedic tone and story beats of a Monkey Island game. You meet the characters you expect to, you complete puzzles, you face off against LeChuck. Somewhere along the way you return to Monkey Island alongside Guybrush. Even for people like me, who have no personal nostalgia for a time when Lucasarts adventure games were popular you find yourself understanding the nostalgia of those who can.

Return to Monkey Island is exactly as advertised, a classic Lucasarts game — and a good time.

Return to Monkey Island is available now on Nintendo Switch and PC.

More like this
Gaming
November 20, 2022
Super Mario Bros. is the most groundbreaking title on Nintendo Switch Online
By David Grossman
Gaming
November 19, 2022
Vampire Survivors is the most euphoric indie shooter on Xbox Game Pass
By Mo Mozuch
Gaming
20 hours ago
10 years later, Far Cry’s best villain is just as terrifying as you remember
By Mo Mozuch
Related Tags
Share: