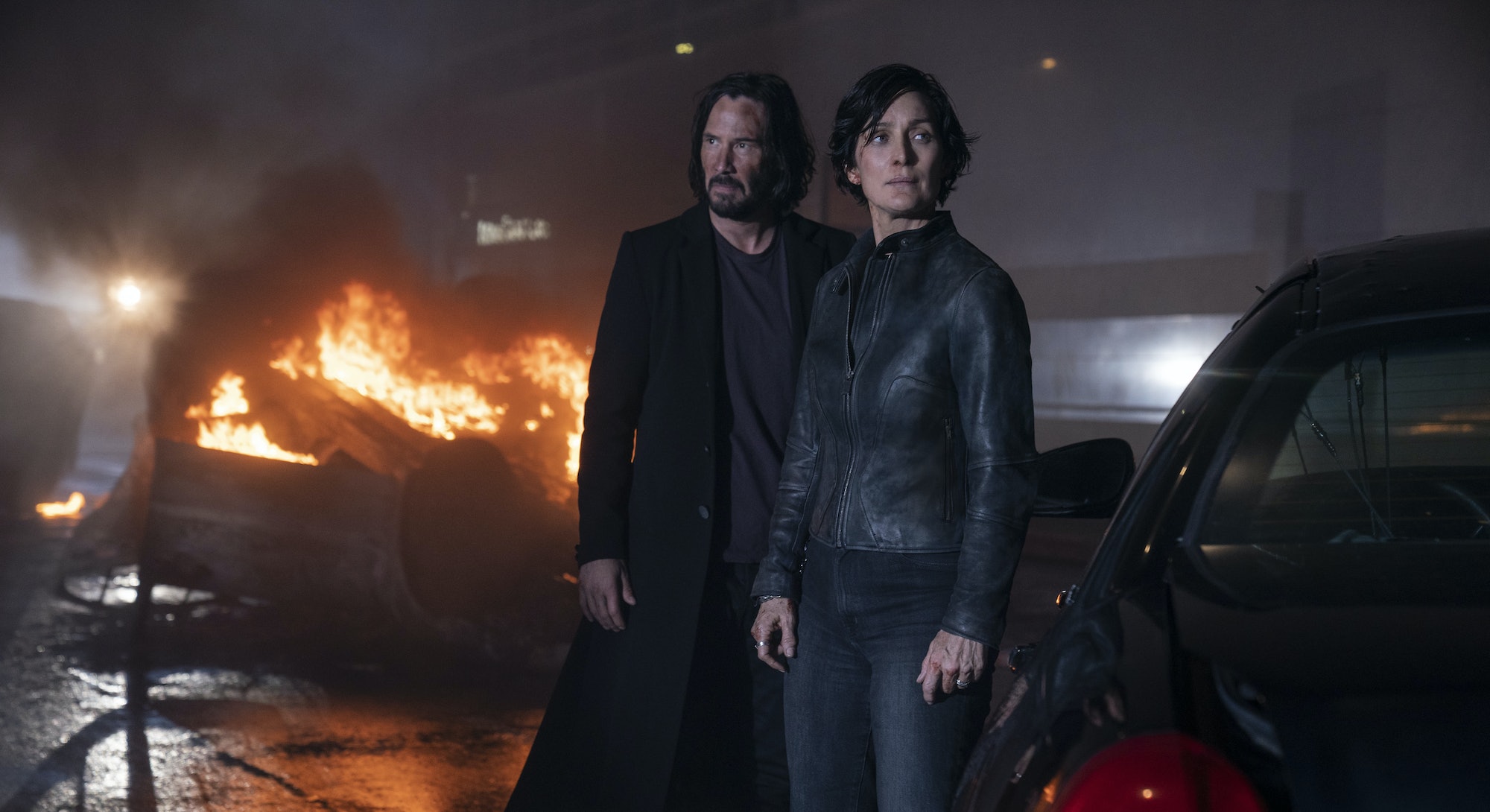 What was The Matrix about, anyway?

In a shiny video game studio office high above the San Francisco skyline, Thomas Anderson (a bearded and weary Keanu Reeves) oversees clueless creatives who debate the impact of The Matrix, released in 1999. (To us, it’s the movie franchise. To them, it’s a trilogy of groundbreaking games. The difference has no meaning.)

The Matrix was original and fresh, market research tells them. Heads nod. But why? Very quickly, and to the haunting melody of Jefferson Airplane’s 1967 hit “White Rabbit,” everyone reveals how little they — and we, the audience — actually remember The Matrix. It was more than guns and explosions, even if that sh*t was tight as hell. So, what was The Matrix?

It’s a question The Matrix Resurrections, wrestles with for much of its two-and-a-half-hour runtime. While it is too verbose to make any clear point, its artistic panache, unrivaled pizzazz, and unabashed tale of torn romance are transgressive enough to shock a system dulled by other overly reverent sequels. It’s the rare sequel that intelligently grapples with nostalgia and the alluring power that stories wield. It’s a strange and surreal picture, secretly satirical of itself but never ashamed.

The Matrix Resurrections is far from perfect, nor is it breaking any new ground like its towering predecessor. It knows it can’t, and that’s the point. As one character observes in meta fashion: “Why use old code to make something new?” Why indeed.

“Transgressive enough to shock a system dulled by other overly reverent sequels.”

Even the basic plot of The Matrix Resurrections can be a spoiler, so I’ll be brief: Neo (Reeves) returns to find himself in a new world and on a mission to save his true love Trinity (Carrie Ann-Moss, also reprising her role). He’s aided by a new group of rebels, led by punk ship commander Bugs (Jessica Henwick) and an alternate version of his mentor, Morpheus (Yahya Abdul-Mateen II). Meanwhile, there is a new character played by a suffocating, out-of-place Neil Patrick Harris, whose blue costuming is a dead giveaway to a purpose that’s supposed to be the movie’s third-act twist.

You have many questions. What you get are comically clumsy answers. The more Resurrections digs into its plot and lore, the more things feel scripted by an A.I. that’s been fed CW scripts. With solo director Lana Wachowski (sister Lily is not involved), that execution feels satirical and intentional. As one-half of the sisters who wrote and directed The Matrix many moons ago, there’s an unmistakable impression The Matrix is the work she is most proud of — and the work she’d sooner leave behind.

Through Neo, whose office is adorned with awards and Matrix merch, Wachowski expresses fatigue at coming back to “where it all started” (spoken aloud by a sharp Jonathan Groff, as a rebooted “Smith”). Hysterical verbal references to Warner Bros. and its ruthlessness for a sequel with or without Thomas Anderson (read: Wachowski) do more for WarnerMedia’s brand recognition than all of Space Jam: A New Legacy.

In a monkey’s paw to the studio, Wachowski grills the only question that matters: What was The Matrix? If you ask her, it’s a love story. That was true for its maligned sequels, Reloaded and Revolutions, and it’s true now. Tilted views of Neo and Trinity flying over sunsets like Disney royalty are corny but endearing and earnest. It’s also consistent with later era Wachowski, weaver of lofty epics like Cloud Atlas (2012), Jupiter Ascending (2015), and Netflix’s Sense8.

With their heads always in the sky, the Wachowskis never seem down to Earth as artists, which is especially true for all things Matrix. It’s also a lot for casual moviegoers who only want the dank action and not big, immaterial questions about love and legacies. Expect many in your theater (if you’ve chosen not to stream at home) to walk out with angry, heavy steps.

But Resurrections isn’t in love with the past like other franchise sequels (2015’s The Force Awakens and this year’s Ghostbusters: Afterlife come to mind) as much as it’s haunted by it. Wachowski directs her film hyper-aware of how inescapable The Matrix is. Images of saga’s past permeate with frequency both in-universe (including projecting on a canvas to mirror present events) and quick flashes that resemble passing memories. The film reaches for the past at every turn — “Nothing comforts anxiety like a little nostalgia,” a character says behind reflective shades — but keeps things at arm’s length. There’s a distance you can’t see, certainly not amidst the bombardment of familiar images. But as Morpheus would say, you can feel it.

Sadly, Resurrections’ plentiful nods to its past necessitate comparisons, and in many ways, Resurrections falls short. The movie has much ado about the original’s wuxia-style kung fu, including a “reboot” of the sparring match between Neo and Morpheus. But missing from the set is choreographer Yuen Woo-ping, the Hong Kong legend whose elegant artistry is as much a part of The Matrix’s legacy as the Wachowskis’ transgressive storytelling. His absence dooms Resurrections to a pale imitation, and the tactical style of his replacement, John Wick director Chad Stahelski, meshes poorly with the franchise’s imaginative premise.

The absence of Yuen is also revealed in appalling camera work that fails to capture the thunderous intensity of every flying kick. The result is a lesser lasting impression than when Neo and Trinity first flew in the air.

George Lucas once said that Star Wars is like poetry. It rhymes. For Lana Wachowski, The Matrix Resurrections is like a cover song. It slays. However much Resurrections trips, including with its new characters who woefully come and go underdeveloped, it’s when it recognizes it is free of the past and expectations from decades ago that it becomes sublime. For as much as Resurrections is haunted by its past, it’s unafraid of what lies in its future.

What was it that Morpheus told Neo? “Free your mind.” How soon we forget.

The Matrix Resurrections releases December 22 in theaters and HBO Max.