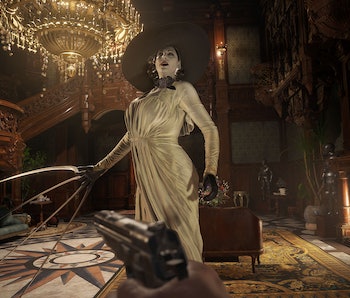 Ready for some chills and thrills? Resident Evil Village is finally out and it’s got more blood than you could fit in a nine-foot-tall vampire (9’6”, to be exact). You’ll get your fair share of gore as you shoot down lycans and other monsters throughout the 8-10 hour horror game.

It wouldn’t be a Resident Evil game without some puzzle-solving, though. Like previous entries in the series, Village has a few little brain-teasers that require some critical thinking. There’s one puzzle in particular that can be especially tricky. It involves a pool of blood and some statues in Lady Dimitrescu’s castle. If you don’t want to brute force it, here’s the solution.

First, let’s go over exactly what you’re looking at here. During the Dimitrescu Castle section, you’ll eventually barge into a new area that includes Lady D’s chamber. At the center of this section, you’ll find a room called the Hall of Ablution. Inside, you’ll see a pool of blood (or wine, but what’s the difference to a vampire?) and four statues surrounding it.

To start, head to the other side of the room and interact with the inscription on the wall. This will give you a riddle that hints at what needs to be done here:

“Women are blind to male advances, but the poor shall take their chances to give the lord their bounty sown, so that soon the wine may flow.”

It clues you as to how you should position each statue. Interact with one, and it’ll turn. Line all four up correctly and the pool will drain.

So what’s the solution? For starters, two of the statues are of women. Line them up so they’re facing one another. Now, they need a male advance to ignore. Turn the statue of the man on horseback so that he’s facing one of the women.

For the last part, turn the statue featuring three “poor” people so that it’s staring at the man on horseback. That way, you’ll have them begging to a lord, who’s too busy looking at a woman that’s ignoring him.

Once everything’s in place, the pool will drain and you’ll find a staircase down to the distillery.

You’ll return to this area later, but you might want to scavenge a bit before you head down into the distillery. There are a couple of things you can get on the Hall of Ablution’s floor that you don’t want to miss.

There are more puzzles where that came from in Lady Dimitrescu’s castle, so enjoy exploring those ornate halls while a giant woman with Wolverine claws tries to murder you.