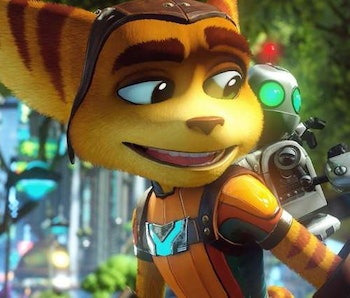 Ahead of the launch of the next game in the series this June, the (supposedly) PS5 exclusive Ratchet and Clank: Rift Apart,PlayStation is giving players the chance to experience where it all started, by making the 2016 remake absolutely free for PS4 and PS5 owners. Once downloaded, Ratchet and Clank will remain in your library after the giveaway ends. Accessing the game, now or later, does not require an active subscription to PS Plus.

There’s only one catch — you have to download your copy by March 31.

The freebie is part of Sony’s ongoing Play at Home campaign, which “aims to provide the PlayStation community with free games and entertainment offers to make the next few months a little more fun.” Another spate of freebies will be available starting March 25.

A reimagining of the 2002 PlayStation 2 hit, Ratchet and Clank incorporates elements from later games, including strafing, automatic upgrades, and kooky weapons. In addition to zapping enemies, the game also adds some unique traversal elements, like using the Swingshot to flit over gaps, walking on magnetic surfaces, and even skimming along on grind rails, Tony Hawk style. You’ll progress by traveling between planets, unlocking new worlds once you complete a set of story objectives. It’s a lot less linear than your typical 3D platformer, with branching paths and a variety of ways to complete a given level.

The original Ratchet and Clank, like all the games in the series, takes place in a science fiction setting and follow the adventures of Ratchet (a feline humanoid known as a Lombax) and his tiny robot pal Clank. Their job? Nothing less than saving the universe from never-ending threats of evil. All in a day’s work.

The series is developed by Insomniac Games, which has seen two huge successes in recent years with 2018’s Marvel’s Spider-Man and its kinda-sequel Marvel’s Spider-Man: Morales in 2020. If you got a kick out of those games’ mix of exhilarating thrills and impeccable polish, be sure to download Ratchet and Clank before the offer ends — you’ll probably find a lot to like here, and it’s a great way to suss out if you’ll enjoy the upcoming sequels.

If not, who cares? It was free anyway.