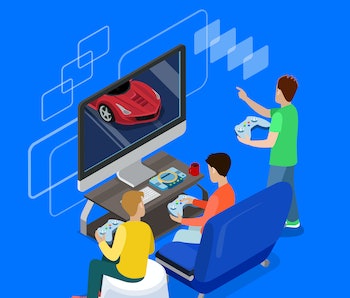 Sony finally unveiled in June what the PlayStation 5 will look like when it launches later in the year, but one of the console’s major features still remains under lock and key. It’s still unclear how the PS5’s main menu and user interface will look like. Sony briefly teased it during the console’s reveal and fans have dreamed up their own concepts, but what Sony is actually planning on doing has been a mystery — but a new patent filing could be a major hint at what's to come.

The company was granted a patent by the U.S. Patent and Trademark Office on Tuesday that might have revealed Sony’s masterplan for the PS5’s UI. The documents were first reported by SegmentNext on Wednesday and lay out a vision for a “unified user interface” that would give players full access to the console’s main menu without having to tab out or minimize a game or application they’re running.

The idea feels like a direct response to the Xbox Series X’s “Quick Resume” feature. During a tech demo in March, Microsoft showcased that this functionality would let gamers pause multiple games at once and keep them running in the background, also giving them the ability to cycle through them with a sidebar menu, as if they had a handful of programs running on a PC. By comparison, the PS4 forces you to close out of almost any application, especially games, if you want to start another one.

Sony’s proposed design is nearly identical to the Quick Resume demo Microsoft aired. The patent blueprints depict the PlayStation’s classic horizontal bar menu overlaid onto a game. This would give users the option to, say, look up a guide video without having to close out of a game, or respond to a message without having to tab out.

This patent comes only a week after PlayStation VP of UX design Matt MacLaurin teased that the PS5’s UI would be a “100 percent overhaul of the PS4 UI” on LinkedIn. His comments have since been deleted, but they hinted at the practical design showed off in the patent.

“As it’s UI, it’s practical first, but it’s a whole new visual language and a complete rearchitecting of the user interface,” wrote MacLaurin. “[The operating system will be] more subtle than flashy, but no pixel is untouched.”

The Inverse Analysis — A completely redesigned PS5 UI that focuses on functionality over aesthetic might be exactly what Sony’s next-gen strategy needs.

PS4 fans have a lot of gripes with the current state of the console’s menu and general UI. Some say it’s extremely sluggish when they leave a game running, while others think it’s overpopulated with ads and other unnecessary visuals. A more simplistic design that can snap into action, thanks to the PS5’s solid-state drive, could go a long way.

Seems like Sony is taking a hint from Microsoft's playbook for this next-gen improvement.

The Sony PS5 will be released sometime in late 2020.