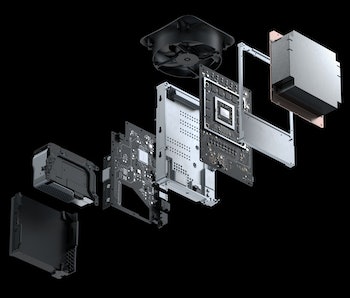 Microsoft has been more upfront about the Xbox Series X's features and specs than Sony has with the PS5, and the company finally unveiled the full specs for the Xbox Series X. This beast of a console should rival the best gaming PCs thanks to a robust GPU and CPU, an SSD drive. Microsoft even dropped a few surprises with the full specs reveal in the form of a quick resume feature and the capacity for expandable memory.

Microsoft revealed just about everything there is to know about the Xbox Series X in a Monday Xbox Wire blog post. By confirming all of these specs, Microsoft has cemented itself as the early leader in the next-gen console war. The Xbox Series X specs mean that games will look bigger and better than ever before, and there's no telling whether or not the PS5 can match it. As of now, only three major mysteries loom over Xbox Series X: the games, price, and release date.

Once Microsoft can confirm its price, show more games taking advantage of next-gen technology, and promise that it will still be released in 2020 despite coronavirus, we can all get truly excited for the upcoming console.

For now, here's everything Microsoft has revealed about the Xbox Series X specs:

This latest announcement confirmed that the Xbox Series X will have an "8 core AMD Zen 2 CPU and an RDNA 2-class GPU." The GPU is 12 teraflops, which is the highest amount on any game console yet. VP and Senior Fellow of Semi-Custom Products and Technologies​ at AMD Sebastien Nussbaum even called this console "the biggest generational leap of SOC [System on a Chip] and API design that we’ve done with Microsoft."

Why it matters: These technological advancements should establish 4K and 60 FPS gameplay as the new standard, while developers can take advantage of the technology to push games up to 8K or 120 FPS. It gives game developers more visual power to play around with.

Xbox Series X has an SSD and expandable memory

The Xbox Series X 1 TB SSD that allows Microsoft to create the "Xbox Velocity Architecture," which will enable "100 GB of game assets to be instantly accessible by the developer" at any time. If that 1 TB of storage doesn't seem like enough for you, the console will also be getting 1 TB expansion memory cards to increase the system's memory.

Why it matters: This should improve load times and the level of detail that goes into open-world games like Cyberpunk 2077. Expandable storage should also help curb any memory issues as the download size for video games continues to rise up to and beyond 100 GB.

The SSD also enables for Quick Resume, a new feature that allows gamers to pause multiple games but keep them running. "With Quick Resume, you can resume multiple games with the press of a button, instantly jumping back into the action, right where you left off, for multiple titles at the same time," the blog post reads.

Quick Room can support up to at least three games, and players will be able to resume them even after unplugging, moving, and updating their Xbox Series X.

Why it matters: With the PS4 and Xbox One, only one game can be paused, and it doesn't work if the system shuts down. By expanding the number of supported titles with Quick Resume and letting it work through complete console shutdowns, the platform should be more appealing to the more transient players who like playing multiple games at once and might pause them randomly.

Why it matters: Even though more casual players may not notice the differences that can be measured in milliseconds, supporting such features are critical for competitive and pro gamers. When inputs (button-presses) can be read even faster and the game is generally running smoother all around, it makes for a more cutting edge competitive experience for casual and pro gamers alike.

When is the Xbox Series X release date?

Unfortunately, a specific release date for the Xbox Series X has not been confirmed by Microsoft, even after the March 16 announcement. That being said, barring any impact in production and distribution due to the coronavirus, Xbox Series X should be released before the holiday season 2020.

Why it matters: Last-gen consoles are now seven years old, so players are hungry for a new console. Both the Xbox Series X and PS5 should be released around the same time later this year, barring any kinds of delays.

Xbox Series X will be released during fall 2020.