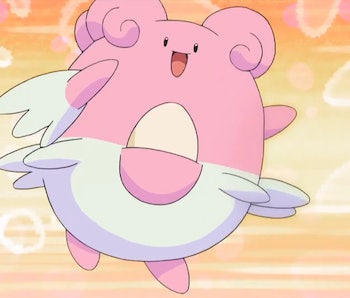 The next Pokémon Unite character is ... not Blastoise.

Even though Blastoise has been teased since the game’s beta stages and was revealed as one of the first post-launch additions to the roster, yet another Pokémon is arriving before. Following Gardevoir, the developers have chosen to add Blissey, a bulky Pokémon that’s synonymous with Nurse Joy in the world of Pokémon.

It seems like Blissey will fulfill an intriguing new niche within Pokémon Unite’s Supporter battle type as a healer and defensive wall. If you’re interested in this addition, this is what you should expect from Blissey in Pokémon Unite.

When is the Pokémon Unite Blissey release date?

When Blissey was revealed, The Pokémon Company and Tencent also revealed its release date. Blissey will be added to Pokémon Unite on August 18, 2021. While a specific release time has not been confirmed, the game often updates at 3 a.m. Eastern, so don’t be shocked if Blissey arrives at that same time.

August 18 is a fitting day for Blissey’s addition as a Pokémon Presents showcase will take place later that day, revealing more about Pokémon Brilliant Diamond, Shining Pearl, and Legends: Arceus. It will certainly be the most exciting day for series fans since Pokémon Unite’s launch!

Is there a Pokémon Unite Blissey trailer?

A trailer showcasing many of Blissey’s moves was released on August 16. Check it out below:

What is Blissey’s Pokémon Unite role?

The tweet revealing Blissey confirms that the new Pokémon will join Eldegoss, Mr. Mime, and Wigglytuff as a Supporter battle-type. This is a smart addition as the Supporter battle type has been underserved since the game’s launch. Blissey’s moves can heal other Pokémon and increase their attack speed.

Its Unite Move is called Bliss Assistance and forces Blissey to move to and protect a Pokémon that is under attack. This combination of moves makes Blissey a unique combo of healer and tank, which is a niche no one else fills in Pokémon Unite.

Her powers might ever make Zeraora a bit easier to deal with as Blissey can buff players to match its attack speed and quickly get healed by Blissey as it comes to their defense. While it remains to be seen what Blissey’s actual impact will be, this support Pokémon definitely has a chance of completely shaking up the Pokémon Unite meta.

How to get Blissey in Pokémon Unite

It does not seem like there will be a special event to earn Blissey when it’s added to Pokémon Unite. Instead, players will simply have to buy their Unite License from the Unite Battle Committee shop. New Pokémon in this shop can cost anywhere from 6,000 Aeos Coins or 345 Aeos Gems to 10,000 Aeos Coins or 575 Aeos Gems.

Gardevoir costs 8,000 Aeos Coins or 460 Aeos gems, and Blissey may share the same price. Regardless of what Blissey costs, be sure to save up some Aoes Coins by playing the game or purchase some Aeos Gems via a microtransaction if you want to get Blissey. You will be able to test Blissey in the game’s practice mode, so make sure you try before you buy!