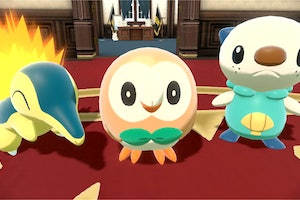 'Pokémon Legends Arceus': 3 ways it could be the series' toughest game yet

It shouldn’t be that easy to catch ‘em all. A lot of people become fans of Pokémon as children, so the games seemed super difficult. Gary Oak, in particular, is an iconic rival who was tough to beat and often mean to the player. As we get older and memorize the type matchups and other gameplay systems that make Pokémon games tick, the games feel far easier.

Developer Game Freak has made the series more accessible over time by implementing features like Exp. Share, which gives experience to every Pokémon on your team after a fight. But the lack of any real challenge has become a common criticism for longtime fans.

Pokémon Legends: Arceus could change all that.

The upcoming Nintendo Switch game is making bold moves, bringing the series into a large open world and making players capture Pokémon without battling them. That means Pokémon Legends: Arceus would be the perfect title to make more difficult than the rest.

Here are three things Game Freak and The Pokémon Company could do to make Pokémon Legends: Arceus the toughest Pokémon game yet.

The Nuzlocke is a self-imposed challenge hardcore Pokémon players use to make the games significantly more difficult. Players can only capture the first Pokémon they encounter in a given area, and must release any Pokémon that faints.

Nuzlockes encourage varied team structure and smart play, and there are thousands of YouTube videos and series based on the challenge. Even some Pokémon clones like Coromon have even gone as far as to implement a Nuzlocke option right into the game. Sadly, The Pokémon Company has yet to acknowledge it. It also remains to be seen if this kind of mode would work with the game's new structure.

The simplest solution to the problem is still worth considering. Playing on easy could decrease the levels of trainers and wild Pokémon, while higher difficulties could increase their levels. Defaulting to easy or normal would keep the game accessible, but having the option to increase the difficulty would be appreciated.

Players can then share these “keys” with others to unlock the different difficulties in their game. While these options were good ideas, requiring players to beat the game at least once before modifying the difficulty, even to make it easier, is confusing. If the series ever reintroduces difficulty options, it should do so in a straightforward way.

This is our only extended look at the game so far.

Pokémon Legends: Arceus will likely feature post-game content like previous games in the series. These endgame areas, like the Battle Frontier, often offer a meatier challenge.

Pokémon Legends: Arceus has the opportunity to turn this up a notch and present some truly tough endgame objectives for players to complete. There could be high-level trainer battles, harder wild Pokémon to catch, or endgame-only dungeons that are difficult to get through.

Reward those who stick with the game for dozens of hours with a tough challenge to overcome, as those that get to that point will be the most hardcore players. Pokémon fans have been begging for more difficult content for years, so it’s time Game Freak finally delivers on that demand.

Pokémon Legends: Arceus will be released on January 28, 2022.